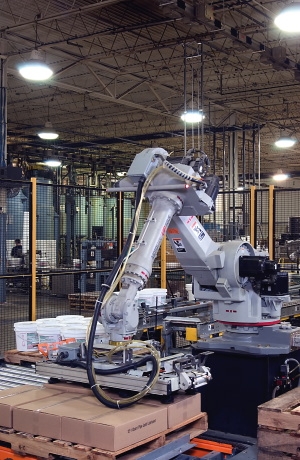 Conventional automatic palletizers have been available since the 1950s. In the 1990s, gantry and then jointed-arm robots made significant inroads in palletizing, leading many to conclude that the conventional palletizer’s days were numbered. Rather than getting immersed in ambiguous statistics and marketing buzz words like “flexible” or “fixed automation,” this paper will look at the specific applications that favour each technology to determine if the future of palletizing is exclusively robotic.

Articulated-arm robotic palletizers have a “wow” factor, but may be a legitimate solution for high-SKU, lower-speed operations, as well as applications where the product shape demands the precision of a robotic arm, such as bags and pails.

Low-speed multi-lines – In order to handle more than one product at a time, a conventional palletizer needs to accumulate layers or loads of like product on an upstream conveying system, then feed them into a palletizer that automatically changes patterns. A palletizing robot can potentially simplify multi-line palletizing by eliminating the upstream conveyor system. Several loads can be built inside the robot work envelope, allowing the arm to work on all of the loads at the same time while storing the partial loads in cubic form at floor level. This is a very effective concept for lower-speed lines, generally under 15 cases per minute, per line.

Bag palletizing – Jointed-arm robots dominate the bag palletizing business. Clam shell tooling allows the robot to pick the bag from a roller conveyor and place it on the load without disturbing the contents of the bag, resulting in a straight and square load. Furthermore, the bags benefit from being dropped into place, allowing the robot to achieve higher rates than they can achieve in case palletizing – frequently above 20 cycles per minute. Robots have the ability to work in confined spaces and dusty environments, adding to their appeal in the bag palletizing business.

Display Loads – Display loads frequently require four-way, graphics-out orienting, multiple different sheets within a single load, special dunnage, etc. These requirements can be addressed with a conventional palletizer, but the cost may increase to the point where robotics is a more practical solution.

Conventional automatic palletizers are capable of very high speeds, which is why they continue to be routinely specified for high-speed manufacturing lines found in the food, beverage and consumer goods industries. Surprisingly, they can also be more flexible than robots in regards to product packaging and stacking patterns.

High-speed – 200 cases per minute and 20 layers per minute are possible on in-line, continuous-motion palletizers. Robots are intermittent motion machines, and it would take many of them working together to achieve these speeds. For high-speed manufacturing operations, there is simply no other alternative that can get the job done.

Complex pattern forming – Conventional palletizers handle each case individually and, therefore, pattern changes have a relatively small impact on rate. In order to get reasonable throughput from a limited cycle rate, robots are generally handling multiple cases at a time. If case sizes or stacking patterns change, dramatic rate reductions can result. For example, changing from a nine-block, column-stacked pattern to a nine-block pinwheel pattern will frequently result in a 50 percent rate reduction on a robotic system.

Robotic pattern forming with conventional layer deposit – This concept seems to combine the best of both technologies for higher-rate applications. Robots are used to precisely turn and position the cases, while conventional technology is used to square and deposit the layers. Because the robot does not have to lift the product, it can operate at over 40 cycles per minute on a wide range of package types. Because cases do not have to be positioned in fixed-lane locations, pattern flexibility is improved and new pattern creation is simplified. The cost for this concept is still higher than conventional high-speed palletizers, but the added expense can be justified in some applications.

2. Robots already dominate low-speed, multi-line and bag palletizing applications. Other applications that benefit from robotic precision, and the robot’s high-tech image, will ensure their continued growth.

3. Hybrid applications, using the robot as a component of a machine, will experience dramatic growth. Currently, robots are seen manipulating cases inside conventional palletizers. As mass production lowers robot costs, more applications, like tier sheet inserting, will be performed robotically.

In short, no single technology will dominate palletizing for the foreseeable future. The application will continue to dictate the best palletizing technology.