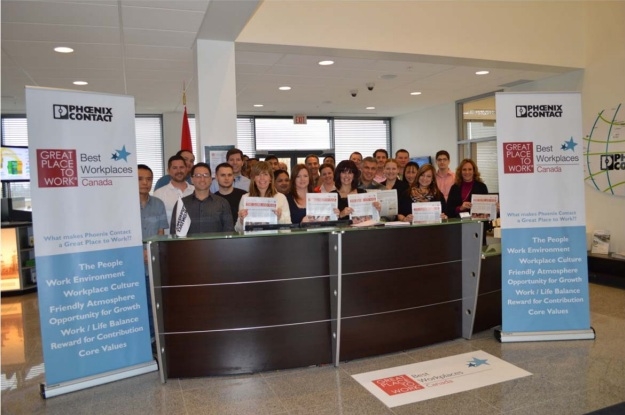 Milton, Ont.-based Phoenix Contact has been honoured as one of the Top 50 Best Workplaces in Canada by GPTW Canada.

Phoenix Contact Limited was incorporated in Canada in 1983 and commenced business with two employees, in a tiny rented building in Mississauga.

Today, the company operates from a 25,000sq. ft., state-of-the-art building in Milton and employs 65 people. Headquartered in Milton since 2011 and with regional offices and exhibition centres in Montreal and Calgary, the company has grown exponentially since its beginnings 30 years ago.

Since 2008, the company has participated in the Great Place to Work survey and has been recognized twice, as one of Canada’s Great Places to Work in this time period, the first time in 2009 and again now, in 2013.

According to Kevin McKenna, general manager, Phoenix Contact Ltd., the company’s success is attributed to the employees, all of whom are fully engaged and passionate about their roles in the company. Our employees have been and will continue to be our core strength

“If you are able to create an atmosphere where people enjoy working together, and they want to be there, that’s what contributes the most to it in my mind,” said McKenna in a statement.

Great Place to Work chooses its list based on credibility, respect, fairness, pride and camaraderie, according to the organization.