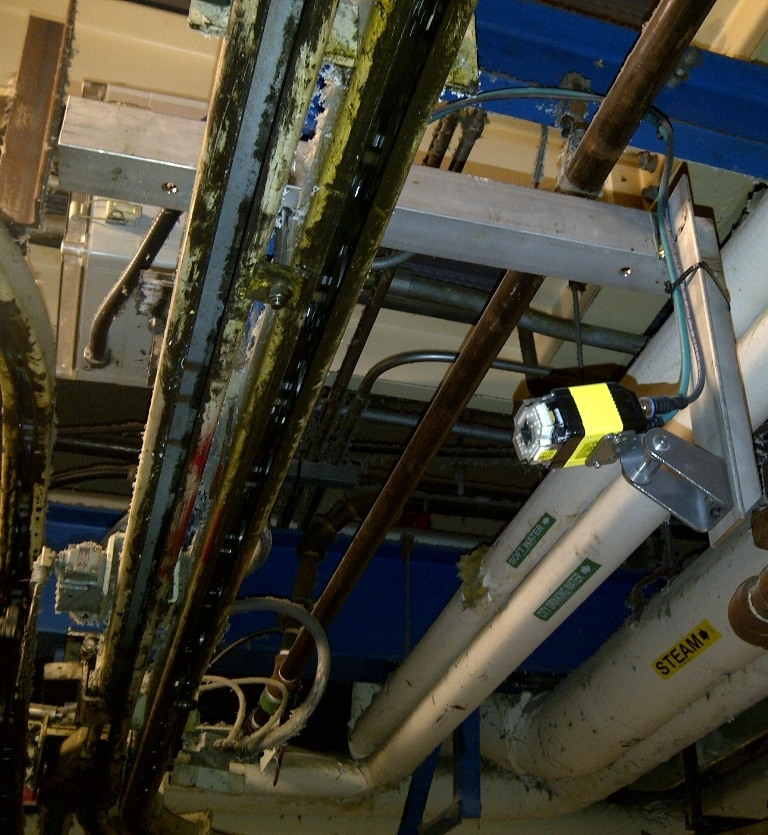 A DataMan 300 reading carrier barcode at a diverter station
Advertisement

A Canadian manufacturer of composite materials used in construction materials, tires and other products moves work in process around its facility on a conveyor system. Each carrier on the conveyor system has a tag with a 1-D barcode used to track which operations have been performed on its contents and direct it to the next station. The tags can be challenging to read because the carriers go through ovens where they pick up soot, are sprayed with water and are dented in collisions.

The laser scanners previously used to read the tags had read rates averaging 86 per cent. Operators had to stop the conveyor system about 20 times per shift for an average of 10 minutes to fix problems such as cleaning tags or clearing collisions.

The manufacturer solved the problem by working with Shelley Automation, a distributor of high technology automation and control products and services based in Toronto, Ont., to switch to image-based ID readers with a new algorithm designed to improve signal quality and increases the speed of signal acquisition, which leaves more time for decoding. The new readers provide 99.9 per cent read rates. Overall traffic in the conveyor has been reduced by 80 per cent because carriers now move directly to the next station rather than looping around. The conveyor now needs to be stopped only about once per shift, saving operators 190 minutes per shift, on average. How is this possible?

The carriers pick up composite filament, called balls of yarn, in the forming department and move to a washing station where the filament is sprayed with water. Then the carrier goes through a drying oven. The next stop is the fabrication area where the filament is unloaded by operators for further processing. Finally, the carriers are directed back to the fabrication area to pick up more filament. During operation, the carriers are directed to each of these stations through spurs off the main conveyor loop. The barcode tags on the carriers are read at the entrance to each spur to determine whether the carrier should be directed to the spur or continue on the main line. If the read fails, then by default the carriers continue on the main line until an operator cleans the tags or manually directs them to the correct station.

In the past, opto-mechanical laser scanners were used to read the tags because of their simplicity, low cost and ease of use. However, this application presents particular challenges for laser scanners (i.e., the potential for codes to be in a degraded condition, at varying angles and in different positions). Because they see only a single scan line at a time, laser scanners have a very limited ability to read poorly printed, degraded, damaged or improperly presented codes. Consequently, the number of misreads for the system as a whole formerly averaged about 60,000 per month.

If the tag cannot be read, then the carrier continues looping around the conveyor system without entering any of the stations. In the past, the conveyor tracks were largely filled with carriers with unreadable tags, generating wear and tear and consuming power without adding any value. The conveyor system has many chains that needed to be replaced about every two years at a cost of about $25,000 each. The high volume of traffic also increased the frequency of events such as collisions that made it necessary to shut down and manually clear the conveyor system. To minimize these problems, operators were required to regularly clean off the tags so they could be read or manually direct the carriers to the correct station.

Three years ago, the composites manufacturer began working to transition from laser scanners to image-based barcode readers in an effort to achieve higher reader rates, lower maintenance costs and process improvements. Image-based barcode readers can significantly improve read rates on damaged or degraded barcodes. Instead of relying on a photocell monitoring the reflections of a single laser beam passing across the barcode to generate an electrical signal, image-based readers capture an image, and then use a series of algorithms to make it easier to read. A typical algorithm searches the entire image for the code and identifies the position and orientation of the code for easy reading. Other algorithms handle degradations in code quality such as damage, quiet zone violations and reflections.

In contrast to laser scanners, which demand frequent repair and replacement because they require moving parts to actuate the laser beam across the barcode, image-based readers are solid-state and don’t wear out over time. As a result, image-based barcode readers provide two to three times the life of laser scanners because they don’t rely on a motor-driven oscillating mirror that’s subject to failure.

Imaged-based readers make it possible to save “no-read” images for later review. The ability to analyse “no reads” through image archiving provides the opportunity for continuous improvement. Reviewing saved images of parts whose barcodes were not read generally reveals if the problem resides within the reader setup or the process. For example, was the tag missing? Was the tag dirty? Was the tag tilted? With visualization, the root issue can be addressed in a continuous process improvement program.

One final advantage of image-based ID readers is that they can also read two-dimensional codes like Data Matrix that are increasingly being adopted by manufacturers to improve traceability because they can hold a much larger volume of data.

The first generation of image-based ID readers offered improvements in read rates, but issues with lighting prevented them from reaching their full potential. The second generation offered additional improvements but did not provide a continuous trigger, which is needed for this application because of the speed at which carriers move along the track.

“When Cognex introduced DataMan 300 ID readers, we felt they had everything that was needed to address this application,” said Mike Marges, application engineer for Shelley Automation.

Cognex DataMan 300 ID readers use 1DMax code reading algorithms with Hotbars technology to read even damaged linear barcodes at a high rate of speed. The 1DMax algorithm uses omnidirectional texture analysis to identify areas in the image that may contain the barcode regardless of the orientation of the barcode. Once neighbourhoods are evaluated for the likelihood of containing a barcode, a clustering algorithm joins likely neighbourhoods into more complete regions. These regions are further analysed and filtered to produce the final set to be subjected to decode attempts. The time budget for texture analysis is just a few nanoseconds per source image pixel on a relatively inexpensive digital signal processor (DSP). Meticulous hand-coding of instructions and sophisticated control of memory makes it possible to execute the finder in a mere handful of processor clocks per source pixel.

Once regions are identified that are likely to contain barcodes, decode attempts can be made. Here, the fundamental image analysis operation is the extraction of a 1-D digital signal from the 2-D source image along a line of given orientation, often called a projection line. In order to provide high geometric accuracy, good noise reduction and acceptable resolution, contemporary state-of-the-art methods effectively rotate a portion of the image so that the projection line becomes horizontal. Methods for rotating a digital image are well known and typically use some form of interpolation to estimate pixel values at points in between squares of the pixel grid.

Interpolation methods are based on a model of rotation in the continuous plane, but a discrete pixel grid cannot accurately represent rotation at the small scales characteristic of fine features and the result is some blurring of the signal. Hotbars technology has as its mathematical foundation a model of the behaviour of the pixel grid itself, which allows blur to be reduced while maintaining accuracy and good noise reduction. Hotbars’ enormous signal extraction speed comes from using a novel and extremely efficient algorithm that is well-matched to contemporary DSP architecture. The efficiency of the computation itself and the way that memory is accessed makes Hotbars signal extraction much faster than even the simplest prior methods. Just as important, the ability to extract many more 1-D signals every millisecond has been used to eliminate decoding shortcuts, thereby reducing failure modes and improving read rates.

The DataMan 300 image-based barcode readers are configured with a continuous trigger so they capture about 50 images per second. The carriers move at two inches per second so the vision systems have approximately 30 chances to read each tag as it moves past. The cameras are configured with LED array lighting and a liquid lens that automatically focuses on the tags as the carriers move past. They are mounted on brackets that are used to aim the reader at the tags. The vision systems connect to the plant network through Ethernet and communicate with the PLC using the PLC5 protocol.

From the first tests, the DataMan 500 has delivered 99.99 per cent read rates on the carrier tags. Based on these early successes, the composites manufacturer has installed more than 20 DataMan 300 ID readers throughout the conveyor system.

“With the new scanners delivering near 100 per cent read rates, it has been possible to rewrite the PLC programs to improve conveyor routing,” Marges said. “The result is a reduction in traffic of nearly 80 per cent that is generating an enormous cost savings in terms of reduced maintenance expenses and power consumption. The average number of shutdowns per shift to free carriers that have collided or solve other problems has been reduced from 20 to one, and the resulting conveyor system downtime has been reduced from about 200 minutes to 10 minutes per shift. Operators now spend minimal time cleaning tags and manually directing carriers. Additional improvements in productivity are expected because the improved read time has eliminated delays in obtaining a carrier and has also eliminated work-in-process looping around the conveyor system.”

Ron Pulicari is marketing manager for the Americas at Cognex Corporation.