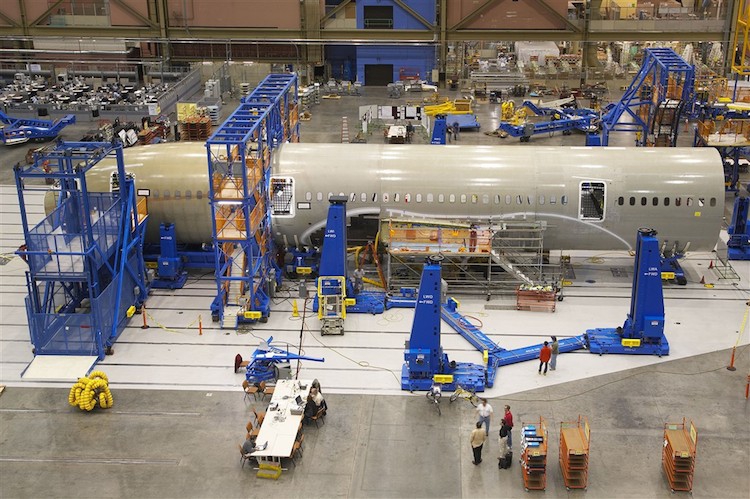 Jun. 30, 2015 – Advanced Integration Technology (AIT) is a 20-year-old supplier of turnkey industrial automation systems for the aerospace industry.
The company’s strength centres on the design and build of complex, fully integrated manufacturing, tooling and assembly systems for commercial and military aircraft produced by Boeing, Bombardier, EADS, Lockheed Martin and others. AIT operates six locations in Canada, the U.S., Sweden and Spain to serve its growing customer base.

On a recent project involving production of the Boeing 787 Dreamliner, AIT designed and built all final body assembly systems needed to join the major fuselage components, plus a moving production line. Key elements in this design included the motion control system, servo drive platforms, failsafe CPUs and all distributed I/O, with the entire system communicating over a Profinet network. In addition, the integration of comprehensive safety technology was incorporated into the standard automation on these systems.

As a prime contractor on the 787, AIT had responsibility for the final assembly and body join functions, charged with delivering a fully automated positioning and joining system. In the end, two complete assembly systems and one positioning system were provided. The three main sections of the fuselage are joined, with 14 positioners mounted to transport structures that move either independently or interlocked and indexed to the factory floor for stability. Real-time positioning measurement data are logged with an integrated indoor GPS. AIT designed the alignment and positioning systems to allow rolling them under the aircraft dollies after the sections were brought into the Boeing factory, radically reducing auxiliary equipment needs, materials handling requirements and additional positioning steps in the overall process.

Onsite at Boeing, the 14 positioning system components were moved into their respective locations near the cradle dollies and engaged to lift and move the aircraft sections. Once the system was rigidly joined, a measurement system onboard located the airplane sections. This information was fed to the AIT system’s software application. From those data points, the system could then calculate how much each section (nose, tail, left and right wings) needed to move to ensure an exact fit to the adjoining section. This precise alignment ensured a smooth and more rapid build of each aircraft’s fuselage.

In commenting on the particulars of this system’s requirements for his company, Ed Chalupa, president of AIT, explains, “We looked for a supplier with an off-the-shelf selection of automation and motion control solutions who could offer us global support. Our goal here was to align ourselves with a leading automation technology supplier and to utilize all current software, integrated safety and control technology advancements.” He further noted that it was vital the chosen supplier be able to provide comprehensive application engineering support, training on both products and software, plus prototype and demo equipment for AIT’s use with its customer and internally.

After an extensive review of several global contenders, the selection was made for Siemens control system components.

The basic scheme of the motion control system implemented here comprises a Simotion D motion controller, Siemens HMI on a Windows-based PC, a Simatic S7 Safety PLC and fail-safe/standard I/O modules, all running on a Profinet network. This basic architecture was then multiplied by the number of control nodes for each specific operational system in the overall production line being designed by AIT. Each unit is capable of working independently of the others in the line or with the addition of relatively few Profinet cables and mode selections on each unit, the final body join assembly tool is able to run as a single entity. When running together in this latter configuration, the safety devices are likewise working coherently, providing proper response levels to all E-stop events on the line. Each unit motion controller receives commands to perform uniform group movements with the tool as a whole via network communications from the HMI.

Specifically, the Simotion D motion controller used here controls all axis movements to position and align parts. Because AIT delivers a turnkey and dedicated system, customers have no need for further internal customization of the controller hardware or HMI panels.

AIT designed the overall layout of the control architecture, programmed the Simotion system with the Simatic S7 PLC, distributed I/O and integrated safety, plus provided support on the Boeing internal structure and lifecycle support requirements.

The integrated safety concept on this overall system was based upon three core principles: increasingly layered safety architectures, greater degrees of integration between the control and safety systems, plus more use of networking, especially industrial Ethernet and available motion technologies.

In operational sequence, these safety principles manifest themselves in the form of physical barriers and mechanical means such as walls, gates, door interlocks and light curtains, all designed to separate personnel from danger.

Siemens engineered a safety protocol that simplified the complexity often encountered in the integration of control and safety systems. This was achieved by reducing the issues related to different programming languages and procedures, installation and configuration requirements, maintenance procedures and human error factors. The result for AIT and its customer Boeing was lower total cost of ownership (TCO), owing to the substantial reduction in engineering, hardware, training and spare parts needed.

With integrated safety and control, the project has a single system for standard and safe automation, with one bus and one engineering system for both standard and safety technology, which further reduced cost. As a collateral benefit, the software solutions allowed easier replication of series machines. Likewise, faster troubleshooting and extensive diagnostics onboard reduced downtimes on the floor, with faster restart after issue resolution. Functionally, this safety integration in the control system allowed uniform user interfaces and data libraries, plus a reduction in the variety of control cabinets needed for the various applications.

PROFIsafe is the backbone of the fail-safe communication. It facilitates the transmission of both standard and safety-related data on a single bus cable, using either Ethernet or fieldbus protocol. With advanced PLC and industrial Ethernet networking technologies combined, the system safety for AIT and its customer became a production asset that protects the workers from harm and promises maximum availability and uptime. Reductions in initial capital expense and field operating expense were also realized.

In the field, the final assembly and body join automated assembly systems, plus positioning system provided to Boeing, are utilized to join Section 41 (forward fuselage), Sections 47/48 (aft fuselage) and Section 12 (left and right side wings) to the mid-fuselage of the 787 Dreamliner aircraft. Two major sub-assemblies are further split for transport into left- and right-hand minor sub-assemblies.

Motion control, advanced PLC systems and industrial Ethernet networking technologies have enabled machine safety to become a production asset that not only protects workers from harm but also boasts maximum availability and uptime. Machine safety gives a competitive edge that goes to producers with highly integrated operations that are faster, more flexible and more responsive to changing market demands and opportunities.

Errin Major is an industrial account manager for Siemens.

This column originally appeared in the June 2015 issue of Manufacturing AUTOMATION.