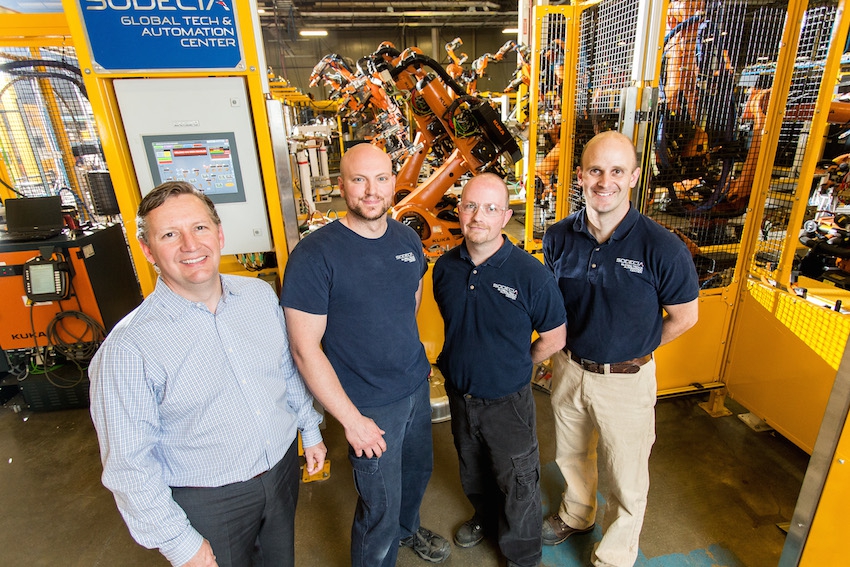 Oct. 13, 2015 – With 32 manufacturing facilities around the world, Porto, Portugal-based manufacturer Sodecia is a designer of highly automated assembly systems for the automotive industry. Sodecia strives to deliver higher performance and functionality while keeping cost under control, and has increased reliance on PC-based control technology in recent years.

Counting 12 of the world’s largest and best-known automotive manufacturers as key clients, Sodecia generates the bulk of its business in the auto industry. Sodecia operates globally as a full-service supplier of manufacturing solutions for chassis, powertrain, and body in white (BIW) commodities. In the automotive industry, BIW refers to the sheet metal components of vehicles that are welded together before moving components, such the motor, sub-assemblies and electronics, have been attached to the vehicle.

Based in London, Ont., Sodecia’s Global Tech & Automation Centre (GTAC) delivers automation products and engineering support to the company’s manufacturing divisions. “We pride ourselves on our ability to continue evolving,” says Brent Lekx-Toniolo, control system concept developer, Sodecia GTAC. “Our current ‘bread and butter’ product is our successful, turnkey robotic weld cell solution. Although each assembly line we build for the Sodecia manufacturing group is always slightly different (based on unique application requirements), the core machine technology remains the same.”

Unsurprisingly, cutting costs while maintaining and boosting product quality are the most amplified challenges faced by Sodecia as the company operates in the demanding automotive manufacturing marketplace. Systems integration offerings from Sodecia include pre-engineered, turnkey automation systems. Most competitive integrators rely on the end customer to select, for example, the PLC platform to be used on their projects. Sodecia GTAC is highly active in selecting best-in-class automation technologies that deliver the optimum results in every application.

PC-based control in the driver’s seat
Sodecia equipment arrives with all of the pre-engineered work already completed, providing a machine that is ready to go with minimal start-up time for the end user. This maximizes uptime and ensures auto production reboots very quickly with the introduction of a new line. Once the customer purchases their first Sodecia machine and they are comfortable with the design philosophy, the functions for future machine purchases can be learned in a fraction of the time, says the company. Sodecia does not manufacture one-off machines; all machines in the company portfolio have a high degree of similarity, keeping the learning curve on subsequent machines short.

The Sodecia GTAC integration group has been automating projects with PC-based control technology from Beckhoff technology since 2008. “To-date, Sodecia GTAC has built 49 manufacturing lines based on Beckhoff PC-based control, ranging anywhere from machines with a single robot to lines with over 20 articulated robots,” reflects Jon Bysma, controls specialist, Sodecia GTAC. One of the most recent Sodecia GTAC projects included 21 Kuka robots of various sizes, including payload capabilities ranging from 210 kg, 30 kg and 6 kg (KR 210, KR 30, and KR 6 series). The scale of this project is larger than any other undertaken by Sodecia GTAC.

The PC-based control system from Beckhoff handles all sequencing aspects of the assembly line. This includes, for example, controlling fixture clamp/unclamp sequences, part detecting and error-proofing, calling specific robots into fixtures, and deciding which tasks the robots need to perform. The PC-based controller also handles robot-to-robot interference detection, general production count and OEE tracking, while managing overall fault detection and annunciation by acting as the HMI for the machine, and integrating all safety aspects of machinery, such as e-stops, safety gates, light curtains, among others.

The expansive assembly line with PC-based control handles a range of steps in the assembly of BIW components. To begin, an assortment of small stampings and sub-assemblies are spot welded, arc welded (studs), stamped or sealed robotically. The finished sub-assemblies are automatically unloaded and transferred to subsequent stages. Later in the process, multiple assemblies are married together – this forms the bulk of the entire finished assembly. From here the process splits into two identical product pipelines — this split creates redundancy and improves throughput, notes the company. Pokayoke devices (such as sensors) on set-down fixtures conduct comprehensive analysis and send data to the PC-based controller, which works to ensure that all fasteners are placed correctly on the assemblies. After several assembly steps, the two pipelines merge back into one and the assemblies move on to a final offload fixture. This application has left hand and right hand assemblies running down the same line, so the entire concept has four pipelines in which the assemblies can be manufactured.

The bulk of the work on this project started in March 2015 and it took a few weeks for Sodecia to complete the floor layout and robot teaching. The PLC programming started at roughly the same time. The actual commissioning of the robotic cell started shortly thereafter, and the first trial parts for the Sodecia end customer were manufactured early in May 2015.

Higher automation horsepower, more safety
While the motion control for each robot is handled by KR C4 controllers from Kuka, the entire 21 robot welding cell is coordinated by TwinCAT PLC software running on one Beckhoff CP6202 Panel PC with 15-in. screen that is equipped with an Intel Celeron ULV processor. “As a strong sign of continuity, Sodecia has been using the same Beckhoff Panel PC type since 2008,” Toniolo explains. “This is because the panel PC is cost-effective, robust, and has proven to be highly reliable.”

Sodecia used a range of software libraries in TwinCAT to speed programming of the robot work cell. “The TwinCAT development environment and Sodecia’s modular code framework based on Structured Text reduced engineering time by a wide margin,” recounts Rob Remillard, lead controls engineer, Sodecia GTAC. “In TwinCAT, we can quickly develop sections of code in any of the IEC 61131-3 languages, prove them out, and then deploy instances of the code for evaluation.” In addition to TwinCAT software, InduSoft HMI software runs concurrently on the same Beckhoff CP6202 Panel PC.

“It was clear to me early on that the team at Sodecia GTAC was motivated to take full advantage of all the key concepts and features of TwinCAT and IEC 61131-3 programming,” explains Calvin Wallace, regional sales manager, Beckhoff Canada. “This is a major example of the increasing utilization of PC-based control in the North American market, including in the high stakes automotive industry.”

EtherCAT industrial Ethernet technology also factors heavily in the application, handling all robotic communications, the full I/O system, and programmable safety functions via the Beckhoff TwinSAFE line of safety I/O terminals. Sodecia GTAC uses TwinSAFE quite heavily on all the company’s designs. Integrating 228 devices, this machine in particular is one of the largest TwinSAFE deployments in North America, notes the company. “Again, we stress the modular machine design approach,” Toniolo adds. “This way our safety configuration doesn’t change much, whether we design a machine with one robot or a system with 21 robots as in this case. We simply remove sections we don’t need from the pre-built framework, but the underlying functionality remains the same.”

Sodecia even uses TwinSAFE technology for safe robot teaching. “During teaching and program verification procedures, the robot technician(s) are in a safeguarded space and TwinSAFE handles robot-to-robot lockout,” Bysma explains. “If a robot tech is teaching a robot, when he/she pulls the ‘enabling switch’ on the robot they’re working on all other robots that could move into that operating space are locked out by means of an e-stop signal loss to the other robots. The enabling switches are all monitored in TwinSAFE, and the resulting signal is passed to any other robot that can enter the space of the one being taught/verified. If anything crosses this space, it moves the other robots from a ‘protective stop’ state to an e-stop state.” Sodecia manages changes to the robotic assembly cells – if the end-user wishes to safely move a robot while any changes are made, functionality can be disabled by the safety master to prevent servo power from enabling that robot.

Each major automated component in the Sodecia GTAC robotic assembly line is connected to an EL6900 TwinSAFE logic terminal and a series of EL1904 and EL2904 safe digital inputs and outputs to handle the processing of the safety I/O, as well as communication with other safety equipment. Safety functions include e-stops, machine monitoring, “AND” and “OR” functions, and decouplers.

“EtherCAT alone has given Sodecia the ability to generate methods of diagnostics that are simply not available with other fieldbuses,” Toniolo exclaims. “For just one example, we’ve used this information available from EtherCAT to do exciting things like localize cable breakage right down to the exact cable in the line, resulting in indicators that blink on the HMI. Similarly, TwinSAFE offers an abundance of diagnostic information and the openness to interface with any EtherCAT slave is assured.”

Auto plant savings hit the accelerator
While never welcome in any manufacturing environment, unscheduled downtime in the automotive industry is especially pronounced, costing unacceptably huge amounts of money. This puts a high demand on reliable technology, but it can also lead some factories to resist change. As such, Sodecia says it put “herculean efforts” into harnessing the best technology available and putting it into a “very robust, reliable and quickly-commissioned package for their high-profile clients.” “The new PC-controlled manufacturing line has achieved an average cycle time of just under 50 seconds and can produce 72 complex parts per hour and up to 355,000 parts per year,” Toniolo explains. “Today, it is automation technology from Beckhoff that has proven most capable in helping Sodecia GTAC maintain this throughput.”

As a result of the functionality inherent in PC-based control and EtherCAT, Sodecia GTAC has been able to reduce time to market significantly. “Compared to previous hardware PLC-based platforms, we have cut control system commissioning time by at least 50 per cent using PC-based control and EtherCAT via superior controls design and programming,” adds Mark Mierkalns, plant manager, Sodecia GTAC. “For example, a simple one or two robot system from Sodecia with four operator stations would normally take up to two months to complete from a PLC configuration and programming perspective. Through the use of TwinCAT, this timeframe has been slashed down to two weeks.”

Freeing up plant floor space is another area Sodecia GTAC drove noteworthy improvements. “Running all the PLC tasks and HMI software in one PC-based controller saves significant floor space on its own,” Mierkalns continues. “Integrating safety technology into one universal control platform is another key enabler. I suspect if we went back to a traditional architecture with separate PLCs, HMI hardware, and safety system, the control platform footprint would be at least 50 per cent larger than it is today.”

With recent successes helping Sodecia Manufacturing serve many of the world’s largest automotive manufacturers, Sodecia GTAC is in a period of expansion. As such, the company will move into a new 23,000 sq. ft. office and 54,000 sq. ft. plant later in 2015. “As we enter into this next phase, all new Sodecia GTAC manufacturing projects going forward will be engineered with Beckhoff PC-based control technology, and our continuous improvement continues,” Toniolo concludes.

This case study was supplied by Beckhoff Automation.