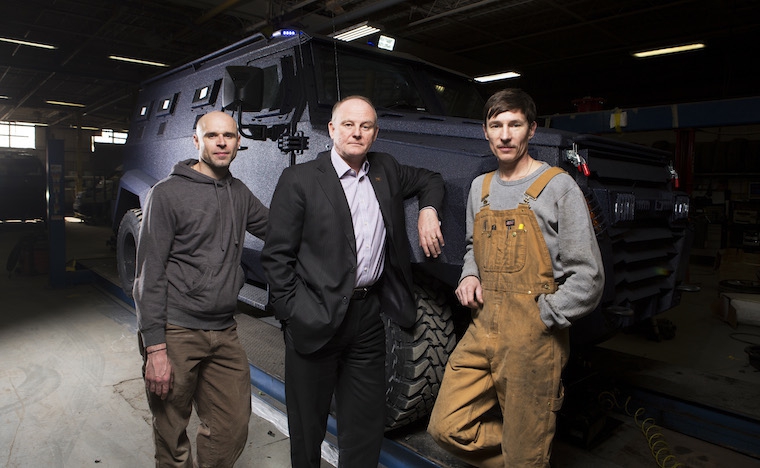 Jul. 14, 2016 – Toronto, Ont.-based Inkas Armored Vehicle Manufacturing is now reaping the benefits of automating and streamlining its manufacturing process with the creation of an in-house metal fabrication division.

Inkas produces specialized armored vehicles from luxury sedans, trucks, SUVs, special purpose military vehicles, cash-in-transit vehicles and even four-wheel-drive tractor trailer platforms. “Stretching” limousines and SUVs into longer versions while adding executive interiors and luxury options is also a big part of the business, with hearse manufacturing a small division in itself. Established in 1996, the company is now the global designer and producer of specialized armored vehicles, with sales offices in several countries.

Its markets span from Africa and South America to the Middle East and Eastern Europe. Most sales are made to government agencies or law enforcement; the U.S. military is a big customer. Other customers include private security firms, banks or celebrities — and a few wealthy folks who just want a really cool and secure vehicle to drive around in.

It was back in 2012 that Inkas made the decision to do its own metal fabrication, creating a new company division called Metaline. With this in place, metal cutting, bending and all precision machining for the other divisions are finished in-house (Inkas also makes safes). Metaline has also increased overall production capacity by more than 30 per cent and enabled the company to accept custom outside jobs, says COO David Fraser, adding that Inkas offers the only high-end precision machining in the area and busy ongoing orders have meant a second shift has been added, with plans to add a third shift this year (24-hour manufacturing).

We spoke to Fraser about how the aspects of the division have automated and streamlined the company’s manufacturing processes. “Because of efficiencies and economies with the automation, we are much faster,” says Fraser. “Development time and production time have been reduced significantly and we are able to do last-minute jobs right away. The synergies of having metal fabrication in-house are priceless, resulting in a much happier and more integrated workforce. The production crews can talk to those bending and the benders can see where it’s going. The engineers can talk to the manufacturing end and see how their designs are implemented, improving the overall process.”

Communication, notes Fraser, is also much faster. “The dialogue between the engineers and the programmer in charge of the work order is ongoing now,” he says. “The engineers can see the product being cut or bent, and can have that conversation with the bending or laser operator right on the floor. That happens everyday and it’s made us so much stronger.” Fraser says he can’t see Inkas without this increased capability. “We would not be able to produce 35 vehicles a month or create new models. It would be very, very expensive and much, much more time-consuming to the point of not being feasible. We have to have new models every year.”

Before they made the decision, Fraser and other executives looked carefully at capital costs. He says that from the perspective of being able to access outside jobs, going ahead with bringing fabrication in-house made sense. “We knew there was a great market out there with very lucrative work,” he says. “There were and are lots of small fabricators out there but we have the high-end equipment and a workforce that can provide quick, high-quality turnaround. There were no surprises with the demand. We had done our homework and we were well-prepared for the orders.”

Metaline takes up about a third of Inkas’s 170,000 ft2 plant footage. As a result, the manufacturing space has been squeezed a bit, he says, adding that no one minds as “quality and efficiency is so much better.” ROI was achieved in 2015 (within three years) and became faster after the second shift was added. A few pieces of equipment, such as a bigger metal-bender, were also added over time.

From start to finish
The production process can be broken down into three main stages: preparatory, armoring and finalization. The production process starts with engineering and design, where the engineering team designs all materials required for armoring using 3D software. After that, the design project is submitted for precision laser and cutting. Then, the vehicle is stripped down to its frame so the re-building can begin. Armoring and other modifications add 20 to 25 per cent to the original vehicle weight, so upgrades to suspension and braking are a must. Door hinges are also reinforced and ballistic glass is added. Options include run-flat tires, protection for fuel systems and electronics, escape hatches, sirens, bomb-jamming devices, water cannons, pop-up gun turrets, sniper platforms, gun ports, spotlights and more. Customers can also get “night mode,” where no vehicle light is visible. All Inkas products are GPS-equipped and certain functions, such as door-locking and engine turn-off, can be done remotely. The firm has also developed the Inkas Overlap System, which is built into vehicle doorframes to protect passengers from bullets. When fully armored, the vehicle is upholstered with the customer’s finishing requirements. And in case you were wondering, a finished Inkas vehicle is usually double the sticker price of the original.

Prototypes are built if the client has the budget or if the design is likely to be used again. The latter applies to the Inkas Huron, a 16-passenger tactical attack and defence police/military personnel carrier. The team settled on a four-wheel-drive tractor trailer as the basic platform, adding extreme heat and noise insulation as well as floor-blast protection verified through third-party testing to defend against the equivalent of a light anti-personnel mine. The Huron’s design process took about three months (prototyped around the same time Metaline was being started up), and Metaline manager Denis Kraus estimates that today, the timeline would be six weeks or less.

“It’s the control over all the processes that speeds things up so much,” he notes. “Having things done externally was very slow. Lead times in general have been cut from nine days to two or three days. Our fiber laser cuts parts in seconds, not minutes — about 650 inches per minute. And the programmable break presses are also a significant time-saver, with less waste, less operator error.”

Over the years, the company has received some unusual requests, such as an armored convertible, a rocket-launching turret and the ability to shoot flames from the back of a car, but Philip Daskal, vice-president of sales, says they can usually convince clients to consider other options. With regards to the future, he thinks more smart vehicle functions, such as remote operation, are coming. “The depth and breadth of sensors is also increasing,” he says, “and we’ll likely be building the capacity to launch unmanned aerial vehicles from the trunk in the near future.” With the streamlined efficiency of Metaline, anything is possible, he notes.

This article was originally published in the May 2016 issue of Manufacturing AUTOMATION.