More than a year ago, Nathan Gwinn was suffering from back pain as a result of his job as a press operator at Amber Steel, located west of Toronto in Kitchener, Ont.

Amber Steel specializes in laser cutting, plasma cutting, flame cutting and processing. The company previously employed light curtains as the safety system on its hydraulic press brakes. But while Gwinn’s hands were protected from the force of the press brake, awkward positioning was hurting his back. The light curtain required that the press operator remain at least a foot and a half away from the press brake. And because of that, he was often straining his back and shoulders, and putting his body in “odd” positions.

The light curtain was also hindering productivity. Because press operators could only get within a foot and a half of the press brake, they were only able to cut larger steel sheets when the light curtain was deployed. If the operator had to cut or form small items, he would often bypass the system, which is not an option with today’s tighter safety regulations.

There was no doubt that Amber Steel needed a new solution. And when the Ministry of Labour came in for an inspection, it demanded that the company upgrade its safety system. With the criteria set out in Z142, the code for power press operation, the old light curtains were rendered obsolete. The company needed a safety solution that met Z142 compliance.

In addition to meeting today’s safety standards, the company was looking for an ergonomic solution that would not hinder productivity; something more “user-friendly.”

Since it is the press operators who work with the safety device, Don Lacina, the plant foreman, allowed them to research alternatives, and considered their input in the final decision.

After considering the many options on the market, the team agreed that LazerSafe, a safeguarding system from Omron STI for hydraulic press brakes, was the appropriate solution.

“Press brake operators tend to be more prone to repetitive strain injuries, and really the other style light curtain was kind of putting us in odd positions,” explained Gwinn, who is also a member of the company’s health and safety committee. “I looked at it and thought we were killing two birds with one stone – bringing it up to standards, plus increasing productivity and also protecting the brake press operator from injury.”

The system was installed on the company’s 220-ton and 150-ton hydraulic press brakes more than a year ago. Today, the press operators are forming and cutting pieces they couldn’t before with the safety system intact. LazerSafe allows Gwinn to get within inches of the press brake and workpiece, compared to a foot and a half with the previous light curtain. The close proximity means that he does not have to get into an awkward position to use the press brake. 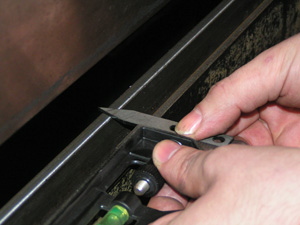 LazerSafe allows the press operator to get within inches of the press brake and workpiece, allowing the operator to form and cut pieces not previously possible with the safety system intact.

The system
LazerSafe is an EN954-1 Category 4 system designed to provide minimum impact on productivity while providing maximum operator safety protection. It allows operators to freely handle the workpiece while providing operator protection and real-time monitoring of the bending process. The system’s main feature is that it stops the press brake when an obstruction is detected. Dual flat bands of continuous laser light detect obstructions as small as four millimetres, while still being vibration tolerant. Other features include stopping distance and speed monitoring. The stopping distance is monitored on every stroke to ensure that the press brake can stop as required. Speed is also monitored on every stroke to ensure that the change of speed occurs as required. 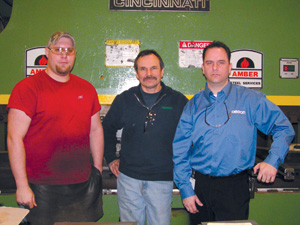 How it works
The solution includes a controller, a transmitter, a receiver and an encoder feedback for the ram. Newer systems include an LCD operator interface panel with menu-driven programming and real-time operational mode status. The transmitter and receiver are mounted on the ram of the press, so that the operator can stay close to the workpiece as the tools close at high speed. Multiple bends can also be achieved without interrupting the laser beams.

The system operates in four modes – normal mode, tray/box mode, field-muted mode, and stop and mute point. But regardless of the mode, any time an obstruction is detected, the ram will stop at the mute point – the position where the safety function is initiated. Depressing the foot switch will allow the cycle to be completed at crawl speed – an important feature for jobs where the shape of the workpiece will break the laser light band. If the crawl speed of 10 mm/sec is exceeded or the stopping distance of 13 mm is exceeded, LazerSafe will issue a stop command to the machine.

Thanks to the closed-loop design, the system can detect failures by monitoring the entire operating cycle of the press brake in real time. If an error is detected, a stop-and-alarm or shut-down signal is issued.

This quick changeover helps improve productivity. Gwinn says LazerSafe is quicker for loading dyes, compared to the previous light curtain used. The setup time is “very short,” which is important, says Gwinn, because he has to do anywhere from two to 25 setups a day, depending on the type of orders, and there is “very minimal lost time in setting that up.”

“This unit, in my opinion, is a great solution regardless of what you’re bending, but it’s more so an attractive solution when you’re making repeated changes,” explains Dan Fournier, national safety solutions sales manager with Omron STI. “The one day I was here, in a matter of two hours they must have made seven dye changes, so I thought if anyone could take advantage of this, it would be them.”

In fact, Gwinn says that the new system has cut the work for some of the jobs in half. “Sometimes we found if you’re forming heavier parts…the part might actually be in the way of the light curtain. So you’d have to actually physically pull the part back out of the way…so you can make your adjustments. You’re almost doing twice the work of what you really had to,” he explains. “We have noticed that [LazerSafe] has improved a lot of jobs; that it’s a lot easier and quicker.”

“Your solution is not supposed to create another hazard,” says Fournier. And that’s exactly what the light curtain was doing. But those days are gone.

Today, Gwinn is experiencing the benefits of the new system. He says that he has noticed reduced fatigue in his shoulders and back since implementing LazerSafe. “We’re not trying to strain ourselves by putting our bodies in certain positions in order to not break the beams of the old light curtain,” he says. “[I’m] more productive because I’m not as tired.”

The Ministry of Labour came back to Amber Steel to inspect the system once it was up and running, and it was in total compliance; no surprise to Gwinn, who sees the results of a safe and ergonomic solution that does not hinder productivity on a daily basis.

Related
Realistic budgets for safety upgrades: What are the true costs?
TOP 5 IN 2010: Automation technologies to watch for
Sensors a “hot” commodity for German manufacturer
Overall equipment effectiveness: Making OEE implementation a success