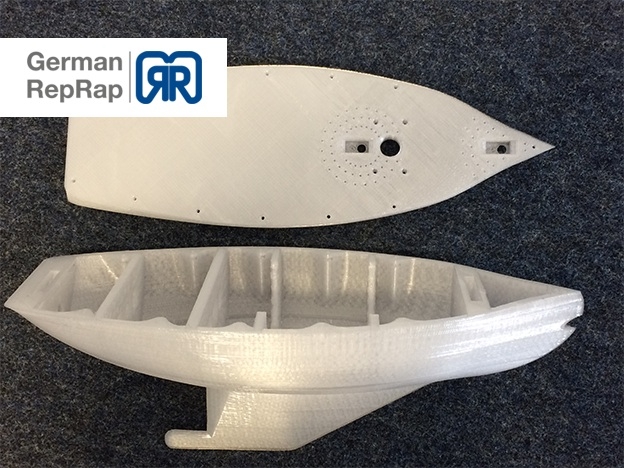 Jun. 14, 2017 – Technology learns how to sail. This is the motto of Sailing Team Darmstadt, which has taken on the challenge of building an autonomous and energy self-sufficient sailboat that can cross the Atlantic Ocean.

Since nobody has yet achieved this feat, a strategic plan needed to be laid out. The sailing team is broken into several groups, which are working on the following areas of focus: power supply, navigation, electronics, control systems, mechanics, organization and software. The German RepRap X1000 3D printer is supporting the sailing team in each of these areas.

The project started in 2008, which means the team has had nine years to accumulate extensive experience in the development of autonomous navigation systems. The team has since grown to 40 members.

At the 2013 World Robotics Sailing Championships in Brest, France, the Sailing Team Darmstadt’s first small, unmanned prototype with a length of just 43 inches managed to sail a distance of more than 4 miles. During the trial, the boat sailed to predetermined GPS coordinates and completed all tasks on its own that usually require a human. Since 2015, the team has been working on a larger successor model, which will cross the Atlantic in its entirety.

“What led us to 3D printing was a loaned FDM [fused deposition modelling] machine. This allowed us to take a closer look at the capabilities of this technology. There already was some familiarity among some members of the team who had dabbled with 3D printing outside of work,” notes Philipp Horstenkamp, a member of the Darmstadt Technical University Sailing Team.

3D printing provides numerous advantages for the team. In addition to cost-effective and quick printing of prototypes, the German RepRap X1000 is used to fabricate more complex functional modules for low-stress applications. Another increasingly common application is the production of components for tradeshows. In the sailing team’s case, they’re producing a complete model of the sailboat’s hull to demonstrate the performance of the finished boat.

3D printing also allows for a rapid production of complex and ultra-light components. Observing and evaluating the performance of actual parts created with a 3D printer allows for a better understanding of the distribution of forces as well as the potential for optimizing those parts.

“The advantages we gain from using 3D printing technology are truly amazing. The capability of fast and straightforward fabrication gives us the freedom to experiment with different components. This results in significant savings, since the fabrication of such detailed prototypes usually requires a lot of time, money and resources,” Horstenkamp says.

For this project, mostly PET-G filament was used with the German RepRap X1000, since this material is much more resistant to slow thermal deformation than others. PET-G stands out due to its ability to maintain sufficient strength and form at temperatures up to 176  degree F. The material is as easy to process as PLA (polylactide) and possesses the same, extremely high surface quality, eliminating the need for post-processing if applied properly. In addition, the material adheres very well to standard PET film and offers the benefit of almost no distortion or warping. PET-G is classified according to fire code (Brandschutzvorschrift B1) as flame-retardant, which is very important to the sailing team for the electrical installation. Additionally, PLA filament was used for the transmission as well as some smaller mounting parts.

“With these parts, we took special care to use supporting structures only where absolutely necessary. This, in turn, saved us time. With so many small openings for fasteners, it was easier to print simple cover layers rather than openings with a solid support structure,” explains Horstenkamp.

The sailing team ended up choosing the German RepRap X1000 3D printer mainly because of its large print area. A 3D printer capable of fabricating parts with such large dimensions is extremely advantageous.

“Due to its large print area, the X1000 easily fulfilled our requirements, and it convinced us with its quality and ability to use different materials,” says the team.

WDS Software & Service GmbH, a verified partner of German RepRap, offered its services for this project with the Darmstadt Technical University Sailing Team.