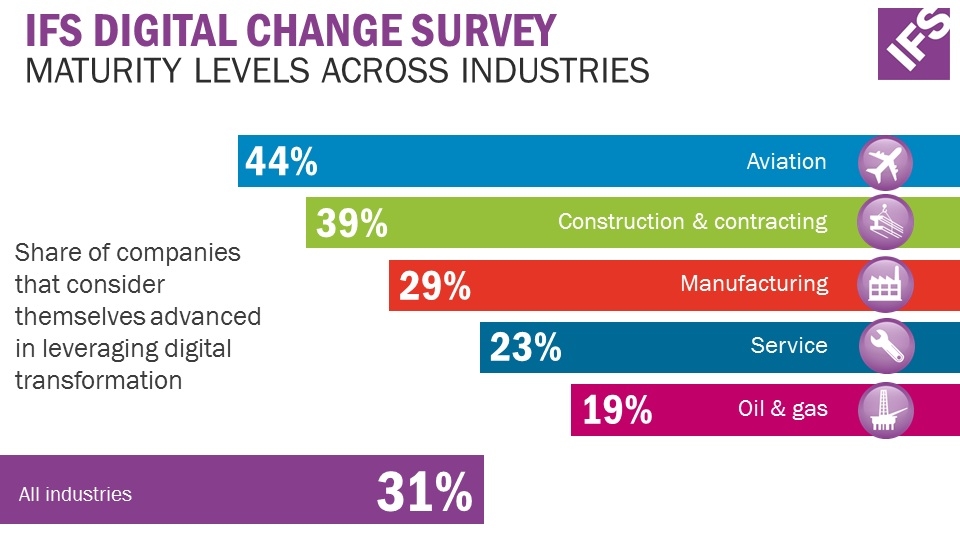 Jun. 21, 2017 – According to IFS’ Digital Change Survey, the manufacturing and construction industries are moving toward digital maturity while the oil and gas industry lags.

The survey polled 750 decision makers in 16 countries, including more than 120 in North America, to assess the maturity of digital transformation in a range of sectors such as manufacturing, oil and gas, aviation, construction and contracting, and service.

“Companies all over the world now understand the urgency of digital transformation,” said Antony Bourne, VP of global industry solutions, IFS. “In fact, more than three quarters of North American respondents, alone, either ‘agree’ or ‘strongly agree’ that their company has the culture and structure in place to adapt quickly and effectively to a digital transformation. They are relying on innovative technologies along with relevant industry expertise to guide them in the right direction.”

However, survey respondents in North America noted that the top barriers to digital transformation have been aversion to change (36 per cent) and security threats/concerns (36 per cent), followed by lack of standard processes (35 per cent), and legislation and compliance (35 per cent).

Furthermore, 45 per cent of North American respondents say the move to servitization has given their company a competitive advantage and enabled them to increase market share and grow existing accounts, compared to only 27 per cent of respondents globally.

What’s inhibiting projects in this sector? According to nearly 77 per cent of North American respondents who agree or strongly agree, “reconciliation of internal and external ERP systems in joint ventures.”

The majority (more than 76 per cent) of North American respondents strongly agree or agree that their company has appetite to implement smart technology but lacks the skills and resources — significantly more than the 56 per cent of respondents who said the same globally.