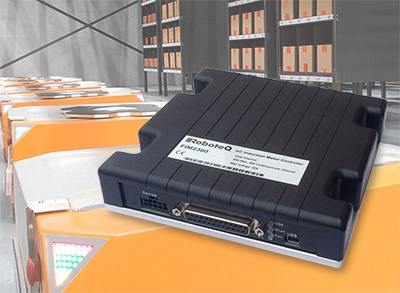 Each motor can draw up to 60Amps at up to 60V, or 3.6kW per channel, says the company. The FIM2360 promises to support multiple advanced operating modes, including Scalar Open Loop Volts per Hertz, Fixed Slip Control or Field Oriented Control Torque/Speed modes. Roboteq says the FIM2360 is suited for use in AGVs, warehouse automation robots, materials handling equipment, agricultural robots or any other high-power, battery operated applications. Combined with Roboteq’s MGS1600 magnetic guide sensor, the FBL2360 can be used to design an AGV with two components. The controller accepts commands from either analogue pedal/joystick, standard R/C radio for simple remote-controlled robot applications, USB or RS232 interface. Using the serial port, the FIM2360 can be used to design fully or semi-autonomous robots by connecting it to single board computers, wireless modems or Wi-Fi adapters. The controller includes up to eight analogue, 10 digital and six pulse inputs. Four 1A digital outputs are provided for activating lights, valves, brakes or other accessories. The FIM2360 is built into a 140 x 140 x 25 mm enclosure with an aluminum bottom plate to promote conduction cooling.