Muting, applied in numerous safety-related automation applications with light curtains, is the temporary suspension of the protective field for access guarding into a danger zone without the safety outputs turning off. Muting is always started by at least two independent sensor signals, typically with the use of retro-reflective sensors.

By allowing transported material faster access into or out of a danger area without interrupting material flow, muting provides productivity gains in the automation process and guarantees personnel protection at the same time.

The two most common types of muting solutions are two-sensor parallel and four-sensor sequential. 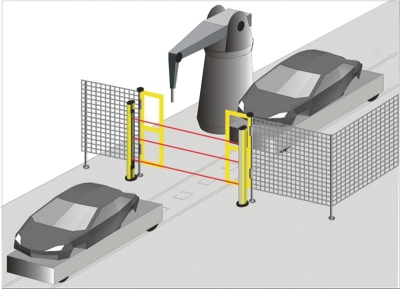 Figure 1 shows an example of four-sensor sequential muting at a robot station, accomplished with four inductive muting sensors (MS1 to MS4) that are activated in sequence by the carrier. This type of muting is used when each piece of transport material has the same dimensions and enough space is provided for entry and exit.

In this case, the muting controller checks only the sequence of the sensor activation/deactivation; the time interval between the sensor signals is not that important. 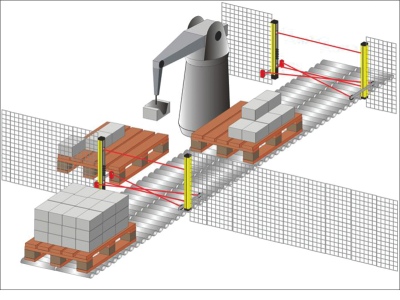 Two-sensor parallel muting, shown in Figure 2 in a palletizer system, is activated by two muting sensors, which cross over each other. Note that the crossover point in the “X” made by the sensors is located inside the “danger” zone. This is done to eliminate tampering and ensure valid muting signals during the transit. Both sensor signals (MS1 and MS2) must be activated within a prescribed time, basically instantaneously. This type of muting is frequently used when the dimensions of the transport material are not consistent or where space is at a premium.

As it stands, an AS-i (Actuator Sensor interface) system can easily incorporate safety components by adding an AS-i safety monitor to the system. However, adding the muting functionality to the safety monitor is the next step that will provide an especially flexible automation solution to the growing AS-i installed base.

The required sensor equipment is made up of muting and safety sensors, which are directly polled by the AS-i interface and then analyzed by an AS-i safety monitor. An example of a cost-effective Safety At Work AS-i solution would be to lay the yellow AS-i flat cable on one side of the system and the passive elements on the other, selecting retro-reflective light beam devices as muting sensors and a transceiver-type light beam safety device with a deflecting mirror.

Connecting the muting sensors, muting start/restart button and muting indicators would be done with standard AS-i input and output modules. The standard light beam safety device would be selected with an integrated AS-i interface and then connected to a safe AS-i input module.

In the past, a separate muting controller had to be integrated into the system by an additional safe AS-i input module. This is no longer necessary. The safety monitor, with muting functionality built in, can now monitor and evaluate the muting equipment. One distinct system advantage, depending on the number of AS-i addresses, is that several muting areas can be configured and monitored by a single AS-i safety monitor. The configurable muting modes can be changed at any time with the safety monitor configuration software (ASIMON). This would reduce the number of components and result in a simpler and faster system to start up and maintain.

Mark Smokowicz is the lead product manager and safety products manager for Leuze electronic, which serves Canada, the U.S. and Mexico. Leuze is a long-standing AS-i SaW consortium member and will release a certified version of the AS-i safety monitor with muting functionality.