Using 3D simulation tools, manufacturing engineers are able to create virtual models of machine tools, robotic assembly, workcells and lines based on the digital definition of the product. These virtual models, in turn, allow them to validate, synchronize and optimize manufacturing processes before they are implemented on the shop floor, reducing manufacturing time and cost.

“In the past, manufacturers were able to simulate large-scale factory layout, but not to the level of detail that is useful in actually optimizing their overall processes,” he explained. “Today, opportunities exist for small to mid-level companies to leverage 3D virtual software and applications that will allow for very accurate simulations.”

These dynamic models not only eliminate the need for expensive prototypes, but also the need for manual physical testing.  And they offer an advantage over designing static 3D models, which, although very detailed, won’t show potential problems related to how machines may operate. In this manner, 3D simulation helps to eliminate down time and repair costs while still being able to evaluate specific design flaws.

By using a common 3D digital platform relying on one original set of data, manufacturing can work concurrently with design. This allows for manufacturability issues to be identified during the design phase in the virtual world – where changes are relatively inexpensive – rather than on the plant floor.

According to CIMdata, organizations using digital manufacturing solutions can expect to see lead time to market reduced by an average of 30 percent, the number of design changes reduced by 65 percent, and the time spent in manufacturing planning reduced by 40 percent. Additionally, production throughput is increased by 15 percent on average, with costs reduced by as much as 13 percent.

Another area where manufacturers may save time in their manufacturing deployment is with robotic programming. Robotic automation is known to improve the productivity of manufacturing operations.

Virtual 3D simulations allow engineers to program the machinery offline and simulate behaviour to verify that robotics perform as required in advance of actual production, even in the case of highly complex automated cells.

A case in point is Dumur Industries, a White City, Sask.-based precision metal fabrication company. In order to realize the potential of a new CO2 five-axis, three-dimensional gantry-style laser robot, Dumur employed the CENIT FASTRIM solution built upon the DELMIA V5 Robotics platform. The first application of the technology was applied to cut holes in an aluminum air reservoir tank. Using the five-axis laser simulated and programmed with the FASTRIM solution, the company is cutting seven to eight holes down the entire length of the tube within 30 seconds. According to Dumur Industries owner Bob Dumur, without this technology the holes would have to be machined on milling equipment, taking up to 40 minutes to produce, not including the individual setup time and the difficulties faced in machining thin-walled aluminum components.

This increase in efficiency has allowed Dumur to bring on another programmer and extend its capability. The simulation technology is also being applied to three Fanuc welding robots, providing a fully functional tooling interface for the design and simulation of complex tooling and fixture device clamps. Previously, the company had been manually programming the robots. Dumur estimates that offline programming capability has reduced robotic programming time on the actual robots from 20 hours per program down to two to three hours.

The level of complexity in programming a complicated system like Dumur’s could not be accomplished efficiently without analysing and optimizing the processes in a virtual world. Simulating and offline programming has allowed Dumur to fabricate components and take on new challenges that could not have profitably been accomplished prior. 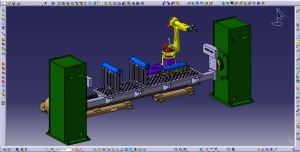 In another instance, a fabricator was challenged by a two-robot material handling cell that was causing a back up in the overall production cycle. By creating the cell in a 3D virtual world, the company was able to create “what if” scenarios to optimize the current robotic operation. It was then able to quickly study a number of options, including both the addition of capital equipment as well as changes in the existing process. What they discovered through the simulations was a solution that involved only minor changes to the existing layout and a reapportioning of the robot tasks. The changes accomplished through the robotic studies resulted in a cycle time reduction of 25 percent, translating into significant savings and the expectation of tripling the production process over the next year.

Since downtime is undesirable, manufacturers also have a need to verify beforehand that its devices will work properly from the outset. New automation software enables control engineers to work in parallel with manufacturing on virtual production to test how a line will perform prior to any physical build. Virtual commissioning allows the debugging of the code on a PLC that will be used on the manufacturing floor weeks or months before the integration of all the devices (tooling, robots, clamps, safety devices, electrical, hydraulics and pneumatics) occurs. This can save weeks to months in the debugging process by enabling the user to set up workcells with smart devices and link the logical behaviour for those devices or machines in the workcell to validate them before commissioning on the shop floor. Results show about 50 percent return on time savings, and an overall ROI of up to 400 percent.

With the help of simulation and virtual testing solutions, manufacturers can achieve optimal performance of equipment, as well as expand manufacturing capability and capacity. Results from early adopters of the technology proved that virtual simulation helped bring products to market quicker, with higher quality and lower overall costs.