News
Report: Canadian manufacturers ahead of other industries on digital transformation, automation 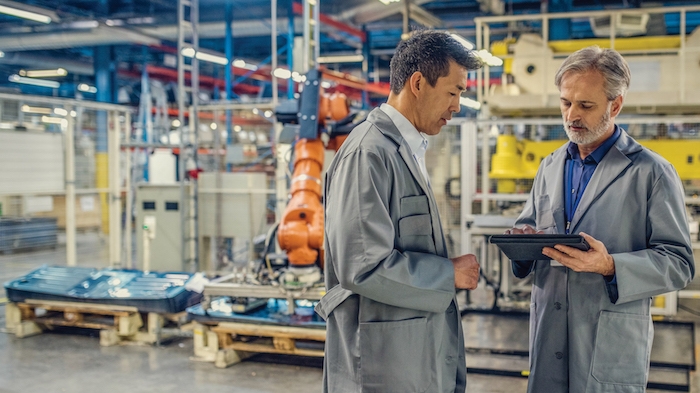 July 5, 2019 – Medium-sized manufacturers in Canada are more likely to be further along in their digital transformation than other companies across the country but fall short on integrating cybersecurity and mobility applications, according to a new study conducted by TELUS Business and International Data Corporation (IDC).

In October 2018, IDC surveyed 203 medium-sized Canadian organizations with 50-999 employees – 30 of which were in the manufacturing sector – as part of its Workplace Transformation Study.

In a manufacturing-focused brief called “Manufacturing and Workplace Transformation: Aligning People, Process and Technology in the Digital Era,” prepared by Nigel Wallis, VP IoT and industry solutions for IDC Canada, Wallis indicates that 43 per cent of Canadian manufacturers are considered “implementers” of digital technologies, meaning they recognize the need for transformation and have already deployed at least one digital solution. This is compared to 34 per cent of all Canadian organizations.

When it comes to being “leaders” of digital transformation – meaning a company has not only implemented multiple digital solutions and seen continued improvement from them, but that the company prioritizes automation and the cloud to increase collaboration – manufacturers are more on par with the rest of the country, tied at 21 per cent.

Expanding the workforce with automation
Like all Canadian organizations, manufacturers are facing the skills gap – but at a higher rate. Fifty-five per cent of manufacturers report a shortage in talent compared to 44 per cent in other industries.

“Manufacturing companies are trying to balance the needs of their human workforce with the expansion of robotics and automation,” Walls notes. “These tools don’t entirely replace human employees, but instead reframe knowledge and collaboration requirements.”

In order to combat the skills shortage, manufacturers are more likely to add automation and outsourcing than other industries. Fifty-five per cent of manufacturers surveyed are in the process of adopting physical automation, over the 39 per cent national average.

Shifting workplace culture
In a shift that aligns with an industries-wide increase in the need for “human” or “soft” skills, the study indicates that 85 per cent of manufacturers have either already implemented or are developing collaborative areas within their workplaces, compared to 72 per cent of businesses nationally.

Work-from-home policies have been adopted or are in the process of being implemented by 54 per cent of manufacturers, and 27 per cent are researching its value, similar to national results. Manufacturers are slightly more likely to have invested in hoteling offi ces to support workplace flexibility (24 per cent versus 20 per cent nationally).

Committing to the cloud
Wallis notes that while manufacturers are much further ahead of other industries in their implementation of cloud-based productivity software, they are behind in adoption of mobile device management and mobile business applications.

When it comes to augmented reality and virtual reality implementation, manufacturers are leaders of the pack, but they fall short on cybersecurity measures. They report a slightly lower rate of working with a security-consulting partner on strengthening their vulnerabilities.

The report stresses that to become an “implementer” of workplace transformation, manufacturers must incorporate a cloud-computing infrastructure – and regularly upgrade it – in addition to working with a security expert to protect data, applications and customers.

According to the study, to become a “leader” of digital transformation, manufacturers must use their existing IoT and automation systems to optimize processes and reduce costs. They should also consider automating more internal and sales support to add more value to their existing human workforce.