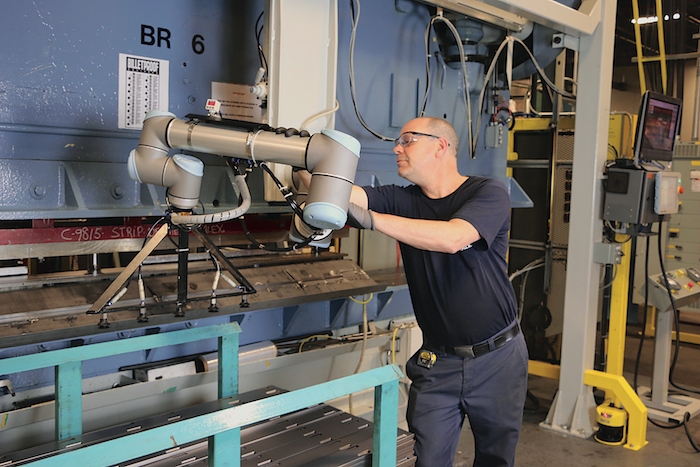 June 6, 2019 – Chris Claringbold, former CEO of KUKA Canada, joined Universal Robots (UR) in December 2018 as the company’s first area sales manager for Canada to bring more collaborative robots (cobots) to the market north of the border.

We speak to Claringbold and Joe Campbell, senior manager of strategic marketing and applications development, about cobot adoption in Canada and how these human-facing robots can help to close the skills gap.

Manufacturing AUTOMATION: What does the market look like in Canada for Universal Robots right now?
Chris Claringbold: Prior to my joining Universal, I wasn’t quite sure how many people [in Canada] were using the cobots. But once I’d joined and met several of our distribution partners, I found there are actually people who are in their fifth or sixth year of using Universal Robots in Canada. It’s growing rapidly. The technology is becoming more mainstream and understood. People now recognize that it is not a typical industrial robot and that it is easier to use in different applications.

Joe Campbell: Both Chris and I come from the traditional robot background, and we’re actively selling robots to customers that likely would not have even received a sales call in the past because they were smaller firms or mid-size firms that don’t have the engineering infrastructure to support the traditional automation. But they have very real needs. That’s a big part of our growth over the last few years.

CC: Many of our customers in Canada are small companies. The first question they have is, “Do I have to go hire an engineer?” We show them the robot, the demo, and how easy it is to set it up, and they recognize that with their own skill sets internally, they can take some of these on. The factor in the past that scared [people] about integrating robots was that they’d always thought they needed a controls person, an engineer, a robot programmer. And when they realize they don’t need all of that to maintain this, they’re jumping on it and integrating it quickly themselves.

MA: What is the general sentiment regarding the investment in automation among Canadian manufacturers?
CC: As true Canadians, we’re all a little bit pessimistic – we don’t want to be the first. But I find that it’s not like the traditional robot market. Once we get past the education part, there’s a very high level of interest in the cobots. And it’s really stemming from two main things that I see. One is that manufacturers cannot find or retain the people that they need. In Canada, we have a lot of work that becomes cyclic, so [manufacturers] hire, run through the season and then lay off, and the people don’t come back. The other is there’s a lot of business outside Southern Ontario that doesn’t get well looked after by companies because they are deemed to be too small or too remote. In Western Canada, these guys are self-sufficient. They don’t rely on integrators. Bringing the Universal product to the market for them – they’re very quick to adapt to it and use it to streamline their own processes. 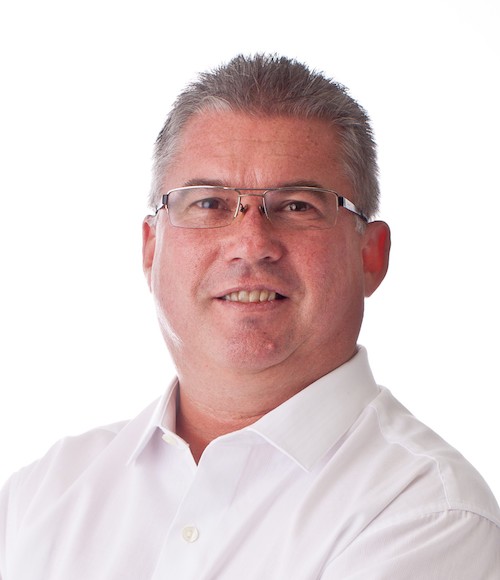 MA: How do collaborative robots differ from traditional automation?
JC: You used to have to solve the whole problem. It was all or nothing to do traditional automation, because you couldn’t mix manual operations with automation. Everything was safety caged and safety guarded. The collaborative products – particularly ours with 17 different levels of safety constraints –work quite happily side by side with human operators. And quite often the solution is to have the cobot do 80 per cent of the process and let the highly skilled operators do the other 20 per cent. From a manufacturing standpoint, they’re getting a very, very good return on investment and they don’t have to go solve the entire problem.

CC: I spent many years in automation, and as Joe said, it’s trying to solve the process issues. You start looking at things where it’s like, “Well, if we leave that up to the person, it’s going to be very difficult.” So you end up over-automating things. Now, you don’t have to automate as much and you can rely on a mixture of the cobot and the person. Cobots are actually changing the mindset of the people who are automating.

I was just talking to a customer the other day, and he wasn’t even looking at the cost of automation or the people. One of his big things was downtime. If he has one of his current industrial robots shut down, it’s heavily guarded and there’s a proper lockout/tagout procedure that has to be followed. To fix it, you have to find the right maintenance guy. Then he comes out to the line, gets down, says he’s got to go into the cage, so he goes and gets his key, does the lockout/tagout, opens the gate, goes in, tries to figure out what’s wrong, tries to restart the robot. And this guy could lose an hour on the production line for something that’s simple.

If he can simplify his process, and doesn’t need the extent of guarding around there, and gets a safe product so a person can actually go in, correct whatever’s wrong, and leave the cell very quickly, his efficiency of production will go way up. There’s a lot of interest in cobots from that side of the business as well.

JC: And we really do have a labour shortage in manufacturing. So if you can take the dull, dirty and dangerous jobs or processes and let the robot handle them, you get much higher job satisfaction from the operators working on the rest of the line. 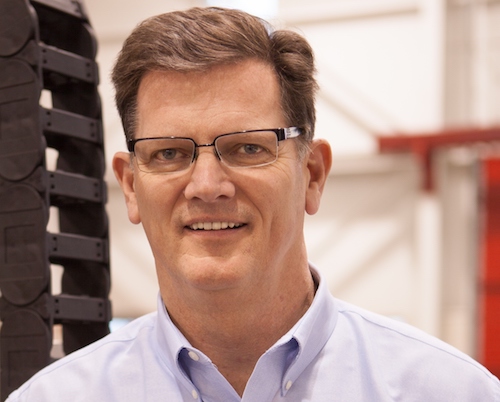 MA: On the other side of that skills gap coin is the fear of automation. Is that a real concern that manufacturers have when you’re out in the marketplace?

CC: I was at a plant yesterday and the operator himself said, “You gotta get one of your robots in here.” He said, “This job is brutal. I can’t do it.” It was an ergonomic nightmare. And the company wasn’t looking to replace him. The company was looking to add the robot to make his job easier. They knew if they could do that, they could improve productivity. They were going to get more product out the door and they were going to hire more people. It’s the message and how it’s being delivered. To anyone who says, “Robots are taking my job and I’m not looking at improving my processes or getting more efficient or building my business” – they’re going to end up going out of business. Anybody who’s serious about it is growing their business, anyway. And is going to be hiring. They’re just going to be hiring and training people differently.

JC: The whole jobs debate ignores the part that there’s going to be a decades-long transition. This is not a tomorrow transition.

CC: Anyone who knows the Canadian market knows that geographically, there are different challenges in different areas. The one thing I find is it doesn’t matter where I go coast to coast, everybody has the same concern: they can’t find enough people. That the people who are doing the jobs now are getting ready to retire, and the young people don’t want to come in. Many of them are thinking of a strategy to bring in things that make manufacturing interesting and fun for younger people. It’s not the dull, dirty job that it used to be. There are progressive companies that are looking to get people into manufacturing by bringing cobots into their plants.