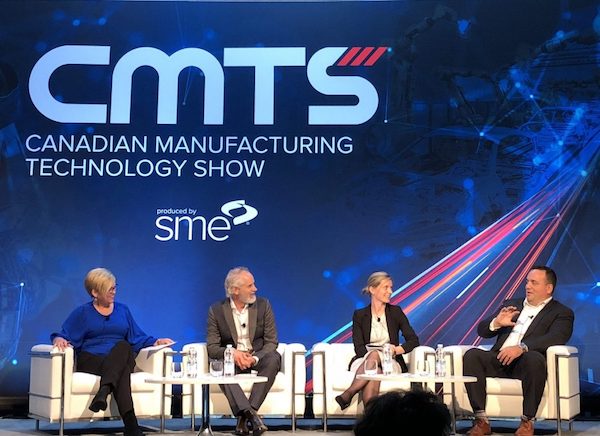 New technologies that encourage innovation in Canadian manufacturing and the optimization of production flows amid workforce challenges were the focus of the 2019 edition of the Canadian Manufacturing Technology Show (CMTS), which wrapped up in Toronto last week.

More than 9,000 manufacturing professionals were expected to attend the biennial event, hosted by SME September 30 through October 3 at The International Centre with over 400 exhibits and a three-day conference program covering automation, robotics, digital transformation and additive manufacturing.

Manufacturing AUTOMATION was at the show throughout the week. Read on for our key takeaways, and find more on our Twitter page.

“The thread of CMTS 2019 is that more than ever, speed matters,” said Sandra Bouckley, executive director of SME, in her opening remarks on day two of the conference. “Our industry has gotten to the point where getting data in real time and making actionable insights based on that data is fundamental.”

Automation is one way for Canadian manufacturers to increase speed and market value. Foreign competitors are using low-cost labour – according to the International Federation of Robotics, China is the fastest-growing market for industrial automation, and is predicted to increase its annual robot sales by 15 to 20 per cent in 2020.

In a well-attended Automation 101 workshop, representatives from FANUC Canada told conference delegates why automation should be central to the digital transformation strategy of an SME, especially given the high cost and shortage of skilled labour in Canada. Automation not only reduces labour costs, but it also reduces scrap, production errors, product returns and energy usage, and can help achieve long production runs on less floor space.

There are many incentives available for manufacturers looking to automate, between government funding and tax breaks for research and development. The FANUC reps stressed that when determining what processes to automate, manufacturers should consider projects that have significant value and that are easy to automate. For example, spot and arc welding account for 40 per cent of all robot applications.

“We need to do a great deal more of this [automation] work, despite our highly skilled workforce,” said Peter Fitzgerald, general manager of FANUC Canada. “Canada is slow to invest.” He said that while there remains uncertainty in the local marketplace, manufacturers should be taking advantage of the low Canadian dollar and its highly trained workforce. Rank potential automation projects by risk, then by return, and communicate throughout the organization.

In another presentation, representatives from Lynch Fluid Controls, a manufacturer of motion control manifolds and hydraulic systems, shared how they transitioned from a small- to medium-sized company through automation, training and market expansion.

The Mississauga, Ontario–based company acquired funding from the government to automate its manufacturing cells and add a third shift, making it a 24/7 lights-out facility. The savings in production costs then allowed the company to expand into eastern Canada and New York. Kenward Mah, director of strategic partnerships at Lynch Fluid Controls, said the final step in the transition was hiring the right people and training them to operate the new robotics and automation in the plant. 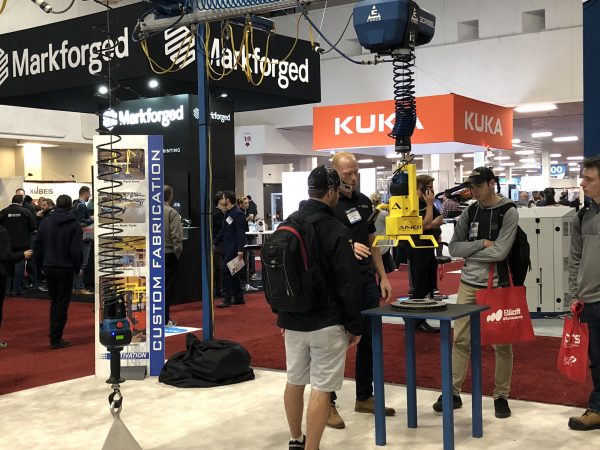 In the “Digitize Now or Risk Falling Behind” session, Ali Lajevardi, regional director for BDC Advisory Services, shared that his firm surveyed 2,000 businesses across Canada and found that 57 per cent are not investing enough in technology. Fourteen per cent are “techno-shy,” meaning management doesn’t want to invest. Another 10 per cent are “technocentric” – they’re purchasing the latest technology but, without a concrete strategy or rollout plan, the application peters out within a few months.

Only 19 per cent of surveyed businesses are considered advanced, with high digital intensity and a high digital culture. These companies control more revenue, experience better profits, and have more time to explore markets, allowing them to scale up.

“When you have new technologies, it’s very hard for companies to visualize how it will help them,” said Lajevardi. “Don’t think of technology as something that will save you money or make things better and faster – think of it as [something] that will change how you do business.”

Manufacturers who have adopted digital technologies have seen real benefits – 60 per cent boosted their productivity, 50 per cent reduced their operating costs and 42 per cent improved their overall product quality, said Lajevardi. BDC offers a free digital maturity assessment tool for companies to see where they fall on their digital transformation readiness. 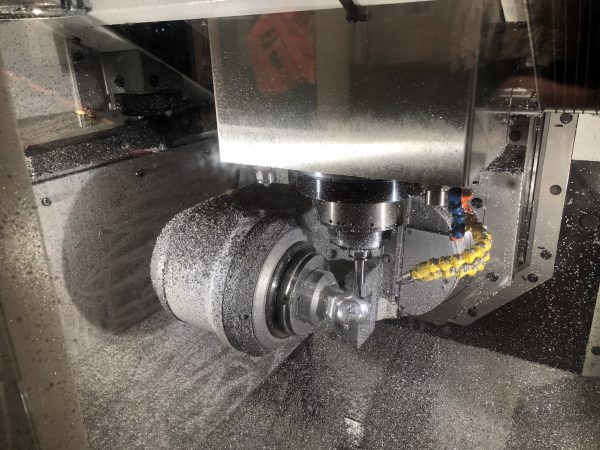 Automation in action at the Georg Fischer booth at CMTS 2019. Photo by Manufacturing AUTOMATION

The need for speed was, as Bouckley said on day 2 of the conference, a main theme of CMTS 2019. But so was the need for more skilled workers to join Canada’s manufacturing workforce, a discussion that punctuated nearly every conference session. According to the CME, 69 per cent of Canadian manufacturers report they currently experience labour shortages – and 74 per cent expect to over the next five years. New technologies, including augmented reality (AR) and additive manufacturing, can be used to supplement the skills gap.

In his keynote, David Nedohin, co-founder of ScopeAR, discussed AR and its applications in manufacturing production, quality, training, safety, maintenance and field service.

Using sensors and vision technology, AR superimposes computer-aided images on top of a user’s real environment by way of tablets, smartphones or wearables such as glasses. The technology is commonly used for guided instructions or viewing real-time instrumentation data.

Combining humans’ ability for decision-making and empathy with AR enhances our already-3D environments and “creates a superhuman experience,” says Nedohin, making humans more capable and informed as they do their work. “It really isn’t about replacing jobs – it’s about augmenting that worker.”

In order to implement augmented reality, manufacturers should determine what their problem is and if it needs additional expertise afforded by the technology, such as statistics, data or instructions. Applications need to be highly repeatable or situation-specific, and be in an environment that is conducive to the viewing experience required for AR (indoors is best). 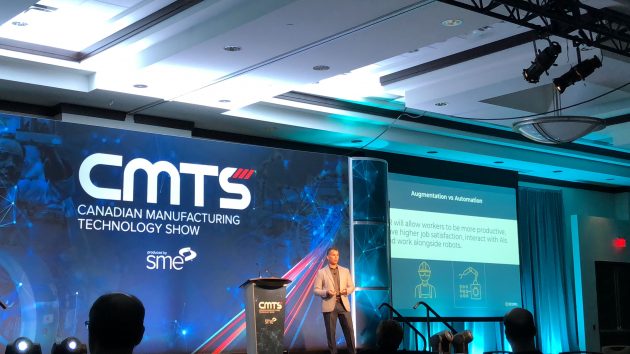 Additive manufacturing was one of the most talked-about trends at CMTS 2019, with dozens of examples of 3D-printed parts on the exhibit floor. Additive opens up new markets in mass production for end-use parts, and in after-market for replacement parts and mass customization. The most innovative use cases employ generative design – human workers input the physics for a part into a software program, which then optimizes the part for functionality and weight.

“It’s a switch in the mindset we have today in terms of how to make parts,” said Ric Fulop, CEO of Desktop Metal, a manufacturer of 3D printers that use powdered metallurgy to construct metal parts.

The process generates complex parts that are more advanced than what traditional machine tools can produce. A key advantage of additive manufacturing is assembly consolidation – as the computer finds the best possible design for a part, it can integrate dozens of formerly separate parts into one piece.

“This technology is still not the most mature,” said Fulop. But there is a variety of desktop 3D printing stations that allow for prototyping parts on a small scale, so manufacturers can explore additive without committing to a larger system. For example, Desktop Metal’s compact new Studio System can be used for in-office prototyping, printing up to 16 cm3 per hour, whereas its large-scale Production System prints up to 12,000 cm3 per hour.

At a media preview of Festo’s CMTS booth, Greg James, regional sales manager for Festo Didactic, said the company’s educational arm is supplying the next generation of talent at vocational and secondary schools with state-of-the-art technical equipment for training. The company recently installed a modular smart factory outfitted with Industry 4.0 technologies, such as intelligent sensors and a manufacturing execution system, at Humber College’s Barrett Centre for Technology Innovation in Toronto.

“We’re trying to fill the skills gap in Canada by promoting Industry 4.0 at the colleges and universities,” said James. “We want to provide the expertise needed to run these systems.”

The company is rolling out its Festo Industry 4.0 Certification program in Western Canada by early to mid 2020. The certification, already in place in the United States, spans three levels covering fundamentals, mechatronics and Industry 4.0 technologies, and ensures participants are trained on the operation of modern systems.

In his introduction to the conference’s final keynote, a panel discussion called “Attracting Tomorrow’s Manufacturing Workforce: A Spotlight on Inclusion and Diversity,” Dennis Darby, president and CEO of Canadian Manufacturers and Exporters (CME), said there has been a mismatch between skilled jobs and curricula over the last 30 years. “The skills gap [problem] has its roots in the primary and secondary school systems,” he said. “There’s been a gradual realignment of elementary and secondary curriculums to gear students to university,” meaning there are fewer students entering the trades.

Darby said that not hiring the right people translates to difficulties increasing production, investing in expansion and retaining top talent who may leave in favour of better work culture. He suggested that secondary students need access to more information about the manufacturing sector and the types of jobs available – both from a government level and a local level. Darby encouraged manufacturers to regularly invite students on plant tours. 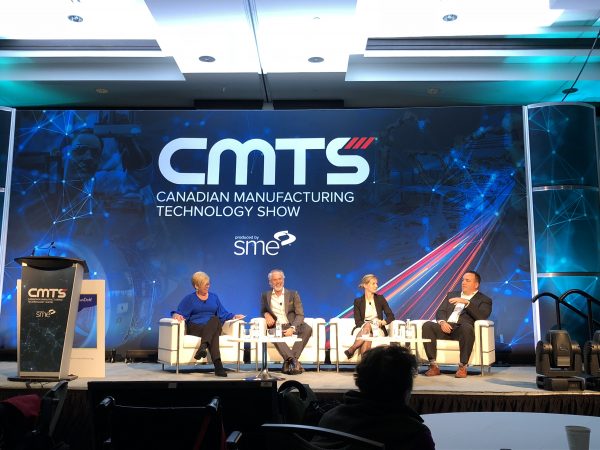 The panellists all agreed it’s especially important to promote manufacturing and STEM jobs to girls – women hold only 28 per cent of manufacturing jobs in Canada despite making up half the workforce, and only five per cent of all skilled trades jobs. CME has launched #WeCanDoIt, an awareness campaign aimed at attracting 100,000 female workers to the manufacturing sector over the next five years.

It’s not that women haven’t wanted roles in manufacturing, but rather that those roles haven’t been presented as viable options to women, said panelist Rhonda Barnet, president of Peterborough, Ontario’s AVIT Manufacturing. “I believe that women don’t know how to be in those roles,” she said. “We haven’t done a good job as an industry of updating our image […] and when we have a more diverse workforce, we have a more productive workforce.”

In working toward inclusion in the workplace, manufacturers should ensure that all of their employees feel empowered to make decisions. Hiring panels should comprise workers with diverse experience and backgrounds. Focus groups within the employee structure can help push change forward. Communicating why these shifts are important can help employees to feel like valuable agents in the process.

“Time investment in things that matter, like people, is just as important as investment in production capacity and milestones,” said Mihaela Vlasea, a panellist, assistant professor at the University of Waterloo and associate research director of the school’s Multi-Scale Additive Manufacturing Lab.

To get started on a gender diversity plan, use CME’s toolkit, available at http://womeninmanufacturing.ca.