AMCO Water Metering Systems was experiencing growing pains at its Ocala, Fla.-based manufacturing and distribution facility. As business grew for the company, which manufactures and distributes high-accuracy metering products to the North American utility, submetering and industrial markets, so too did its inventory. But manual inventory management processes were slowing down its warehouse and distribution operations.

Workers at its 100,000-sq.-ft. facility were bogged down with a paper-based, manual inventory management process. All supply moves were written down and later entered into a MAPICS enterprise resource planning system on stationary desktop PCs, a time-consuming process that made it difficult to manage the company’s stock of parts and finished products. Annual physical inventories took two days to complete with a large staff. Cycle counting was nearly impossible because of the manual data entry process.

“In our warehouse, in order to make any adds or moves, staff had to go back to a PC for the data entry. We were looking for something that they could do for remote connectivity,” says Doug Brucker, information technology manager at AMCO. “That was the primary reason we were looking for an automated solution. We also needed to improve our physical inventory process. Workers used to count everything in the warehouse, write it on a piece of paper, bring it back to the office, and then hand key everything into the system. It took at least two days with twice as many people.”

AMCO found a solution to its data entry woes with QuikTrac I-Series v. 5.1 data collection software, a wireless solution from Integrated Barcoding Systems (IBS) of Adrian, Mich. Brucker discovered the company at a MAPICS user conference, and found that QuikTrac offered real-time integration with MAPICS. Working together with the IBS team, Brucker was able to quickly get the project underway.

The selection and implementation process took approximately one month, and Brucker says the actual installation of the system progressed rapidly. “IBS said they’d have it up and running in five days, and they did that.”

“Before QuikTrac, we used 70 people to do the physical inventory in three days,” says Brucker. “After QuickTrac was deployed, we used 40 people over only one and a half days. We could have done it with even fewer people, but since it was the first time using the system, we had extra people on hand in case there were any difficulties.”

Although AMCO did not have a wireless inventory management system in place, the company was already using some hand-held data collection devices from Symbol Technologies in its assembly operation. AMCO uses the barcode scanners to track its finished water meters – all of which are tagged with a barcode that includes item and serial numbers – through production, to match them to customer orders.

“We do testing of all water meters,” Brucker says. “They were doing that manually before I got here, so we put in a wireless LAN and hand-held computers so they could use the devices to gather that data. Since we had that hardware, I preferred to keep that same equipment across the board.”

Using label printers from Zebra Technologies, AMCO has deployed barcoded location labels throughout its warehouse. Workers scan the location labels with the mobile computers, and enter quantities during inventory moves. Warehouse employees also use the devices for cycle counting and annual physical inventories.

“If they were doing something like year-end counts before, this process took literally days before they could record the actual data into the system,” says Ray Toren, sales and service consultant at IBS. “This was time that they couldn’t be doing production. They had to stop everything to do counts.”

Now, says Brucker, “It takes about half as long, and with fewer people. With the QuikTrac software, we can just enter the quantity of each part number and send that into the MAPICS system wirelessly in the warehouse, as opposed to writing all that data down.

Where AMCO really felt the bang for the buck was with the physical inventory, adds Toren. “This process now takes hours instead of days.” 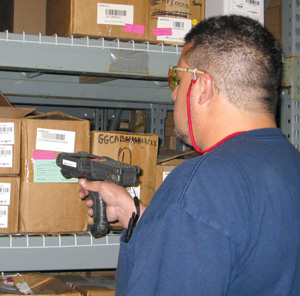 Brian Albright is the principal of Albright Communications, based in Columbus, Ohio.

Related
Wireless security: Do you know where your data is?
Building the business case for industrial Ethernet: Aberdeen Group
Five reasons to wirelessly measure relative humidity
Moving from a wired to a wireless remote monitoring system
Tags