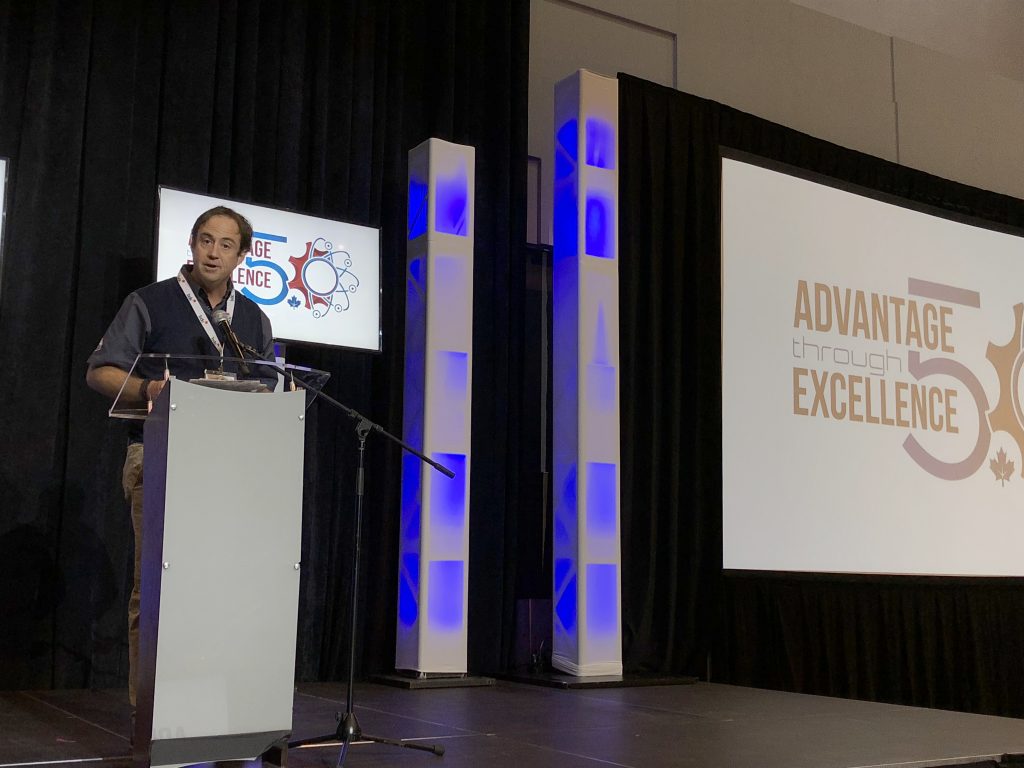 At the Excellence in Manufacturing Consortium (EMC)’s national conference earlier this month, industry leaders discussed automation as both a means to company growth and a solution to the skills shortage in the manufacturing sector.

The Advantage Through Excellence – Future of Manufacturing Conference took place Oct. 9 and 10 in Vaughan, Ont., bringing together professionals from across Canada for two days of knowledge sharing across four streams: advanced manufacturing and innovation, export development and growth, operational excellence and the future state of manufacturing. Plant tours were also offered.

In his keynote, Jayson Myers, chief executive officer of Next Generation Manufacturing Canada (NGen), said it’s a myth that Canada is not a major global player in the advanced manufacturing sector.

“We don’t do enough to advertise and promote what we do here,” he said, noting that over the past 15 years, Canadian manufacturers have been more profitable than their U.S. counterparts despite less overall production.

NGen champions Canada’s advanced manufacturing sector and helps businesses adopt and scale technology by matching them with researchers and investors. The organization also administers the Government of Canada’s investment in the Advanced Manufacturing Supercluster by linking industry projects with federal funds. 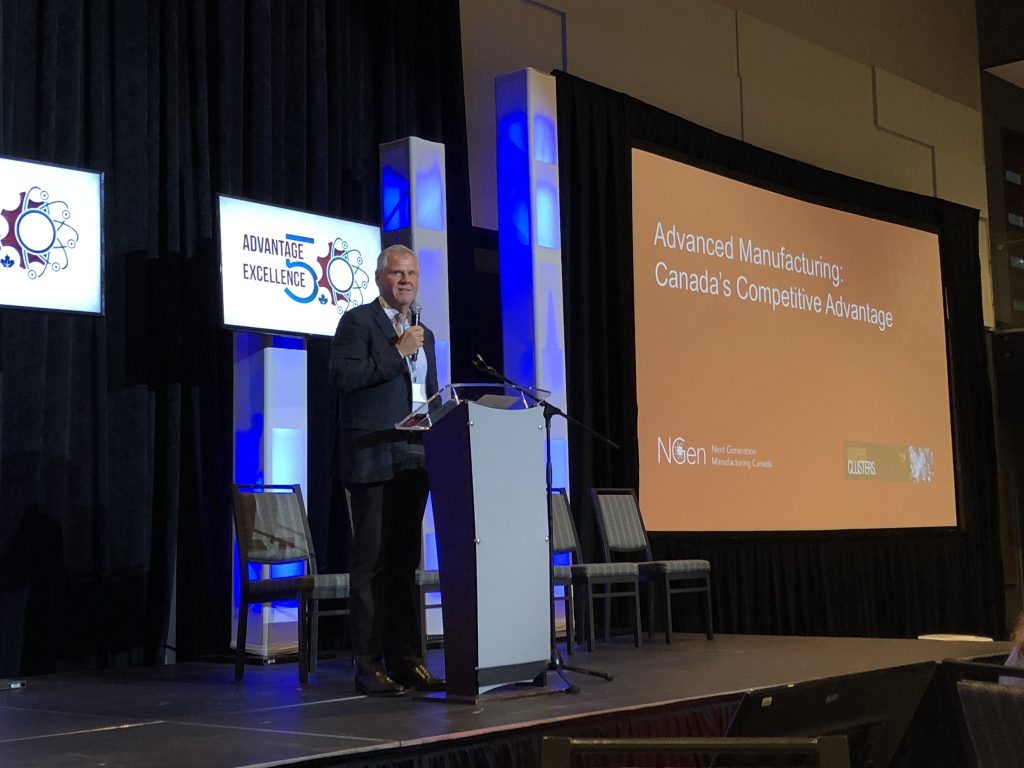 “If we’re going to succeed, advanced manufacturing is not about investments in technology,” Myers said. “It’s about how well we use the technology and are we investing in the right technology in the first place.”

To capitalize on tech implementation, the industry should be collaborating more – not just with government and academia, but with each other, Myers said. He noted that only 17 per cent of Canadian manufacturers regularly partner with other companies. “We’re on a train with a lot of cars missing because we don’t collaborate across the value chain,” he said.

In order to stay competitive, Myers suggested that business leaders focus on customers, people, process and technologies. Manufacturers should seek out new opportunities to create value, while also reducing and eliminating waste in their pursuit of process excellence.

Scott McNeil-Smith, national director of projects and partnerships at the EMC, identified several challenges for manufacturers heading into 2020: the skills shortage, increased costs of manufacturing, increased competition and access to new markets.

SMEs also often believe they can’t afford new technology, McNeil-Smith said. The EMC offers workshops and events for Canadian manufacturers on integrating Industry 4.0 methods and technologies into their operations. “Our challenge is there is still equipment in use from the first and second industrial revolutions,” he said.

Even when corporate support exists for new technology adoption, conference participants agreed there is often a lack of support in the local supply chain. One attendee shared that her employer, a small parts manufacturer, has had trouble sourcing a systems integrator that would cater to the company’s limited needs because the local integrators tend to chase larger contracts.

In an effort to promote market growth and the adoption of new equipment, McNeil-Smith said the EMC is soon launching what it calls Regional Advanced Manufacturing Productivity (RAMP) Hubs to encourage collaboration among manufacturers in their use of robotics and automation. More details will be announced in the coming months; the first hub is expected to be established in the Atlantic provinces.

Michelle Chrétien, director for the Center of Advanced Manufacturing & Design Technology (CAMDT) at Ontario’s Sheridan College, delivered a keynote focused on how manufacturers can partner with their local colleges to advance their use of automation through access to state-of-the-art equipment and industry research.

CAMDT works with students, faculty and industry on real-world projects through modelling, simulation, concept validation, training, fabrication and implementation of advanced technologies, such as additive manufacturing.

There are a multitude of benefits to industry-college partnerships, Chrétien said. Manufacturers can access a pipeline of highly trained, work-ready potential employees through an institution’s student population. This can also help to address workforce diversity shortages, providing a potential solution to the skills gap.

Post-secondary institutions can facilitate access to cutting-edge equipment and expertise, Chrétien said, offering SMEs a low-risk way to explore new products and technologies. Manufacturers also get connected to a team of experts working to solve real-world challenges specific to their business. “It’s about what you need,” Chrétien said, pointing out a defining characteristic of partnering with a local college over a more research-focused institution such as a university. 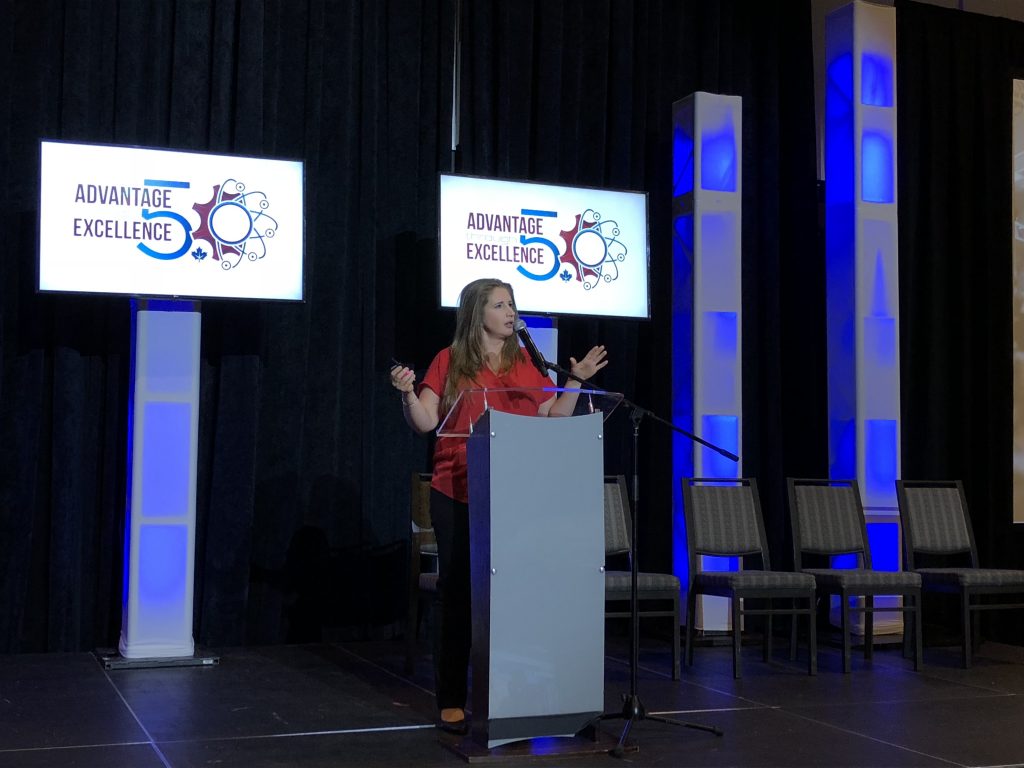 CAMDT was recently involved in a project for E. Hofmann Plastics, a plastics fabrication company in Orangeville, Ont. that wanted to automate its lid gasket insertion process. Previously, the lid gaskets had been inserted manually on the production line, a task that required more than one employee to complete.

“It was a prime target for automation – it took too much time and was not safe,” shared Chrétien.

Over a period of about 10 months, the CAMDT team developed an automation solution that employed machine vision to ensure lids were positioned correctly before insertion using robotics from ABB.

In another case, this time for a stair lift manufacturer, CAMDT developed an automated frame alignment system with weld bending capabilities that allowed the company to customize home stair lifts for its customers. The team spent just over a year developing the robotic system and its PLC programming.

Chrétien also noted that schools provide manufacturers a gateway to a larger network of resources. For example, Sheridan College recently renewed its partnership with SONAMI, the Southern Ontario Network for Advanced Manufacturing Innovation – a consortium of several colleges and one university located in Ontario’s advanced manufacturing corridor. SONAMI aims to increase the capacity of small manufacturers to acquire state-of-the-art equipment by matching SMEs in Southern Ontario with opportunities in the region that offer funding, technology evaluation and strategies for implementation.

Some of Chrétien’s tips for manufacturers looking to work with post-secondary institutions: