May 1, 2017  by Manufacturing AUTOMATION 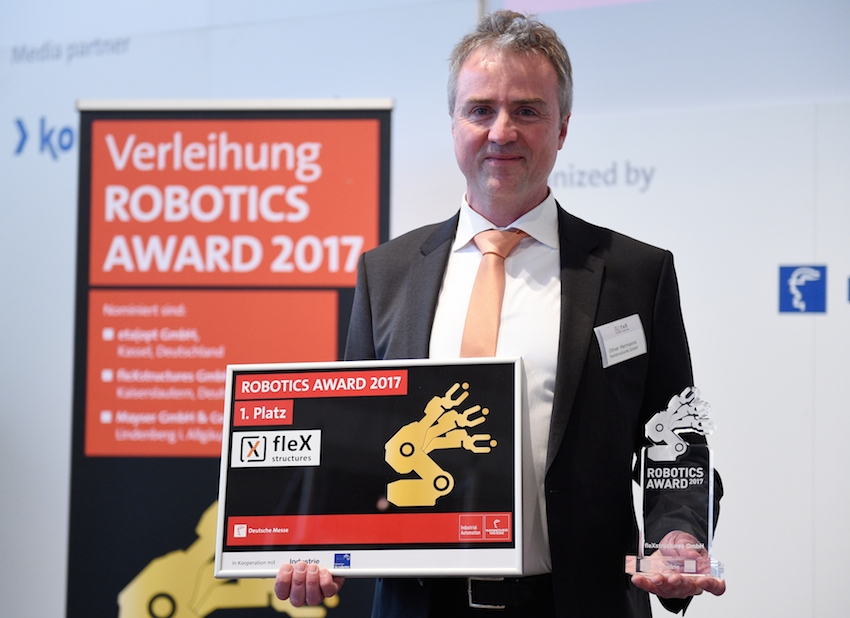 May 1, 2017 – The jury has selected fleXstructures GmbH (Kaiserlautern, Germany) as the winner of the Hannover Messe Robotics Award 2017 for its smart software solution.

At the official ceremony held on the Tuesday of Hannover Messe, fleXstructures CEO Oliver Hermanns received the prize in honour of the IPS robot optimization software.

The award recognizes technological innovations that make a contribution towards robot-assisted solutions in the field of industrial automation or towards the development of mobile robots and autonomous systems. In order to qualify, entries for the Robotics Award must be on show to the public for the first time at Hannover Messe or otherwise constitute a significant further development of an already existing product or system. Furthermore, it must be market-ready or already deployed in real-world industrial trials.

The IPS robot optimization software is targeted primarily at helping automotive manufacturers gain a competitive edge by programming and commissioning their robot cells faster and more flexibly. By simulating millions of potential robot path combinations, the software coordinates movement paths and sequences across multiple robots in an effort to maximize efficiency and avoid collisions, explains the company, adding that the simulations also optimize movement paths to ensure maximum service life for the flexible hoses and lines attached to the robots.