An increasing number of manufacturing organizations are looking at industrial networking as a discipline. Many of these companies are bringing together traditional automation engineering with corporate IT to gain a cross-functional view of how industrial network performance can be improved.

In 2012, the need to reduce operations cost continues to be a pressure. As manufacturing processes become increasingly complex, manufacturers are asked to be more flexible and agile to meet their customer and global supply chain demands. At the same time, manufacturers are also pressured by the need to reduce the risk of adverse events, driving greater scrutiny and accountability. While this pressure has decreased from 37 per cent to 27 per cent, the focus on risk cannot be an afterthought. All of this translates into a greater need for timely and informed decisions, enabled by making real-time data available to more people in more locations than ever. 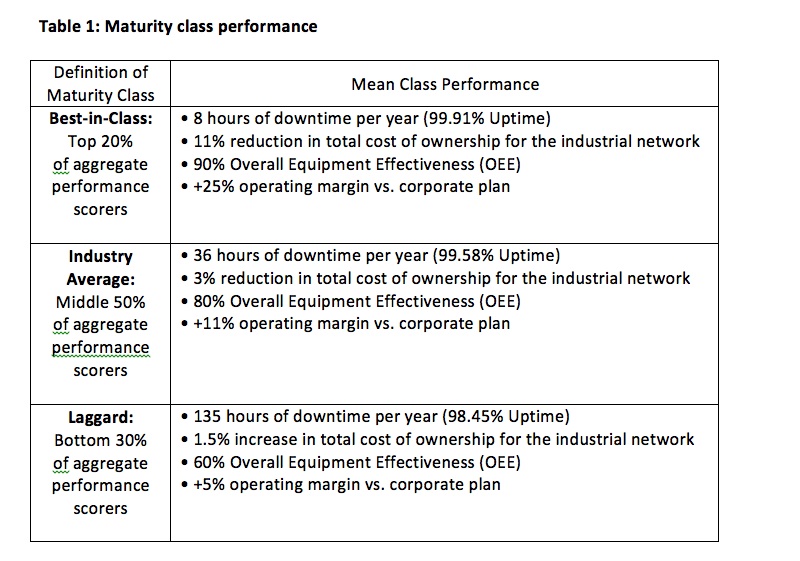 {nomultithumb}
As Table 1 shows, the Best-in-Class companies are able to directly influence the efficiency of their network by optimizing their industrial network with an average of eight hours of network downtime per year (99.91 per cent uptime) as compared to Laggards, who experience 135 hours, or five days, (98.45 per cent uptime) of network downtime per year. At the same time, they are also able to reduce manufacturing operations costs by reducing the Total Cost of Ownership (TCO) by 11 per cent. The Best-in-Class do this all while improving their manufacturing productivity with an OEE rate of 90 per cent and overachieving their operating margin by 25 per cent, compared to Laggards who only achieve 60 per cent and 5 per cent respectively.

Business capabilities
With millions of dollars invested in enterprise business and engineering systems, and millions more invested in process control and factory automation systems, companies are looking for ways to power the enterprise with a real-time capability that capitalizes on the untapped synergies of these two domains. The Best-in-Class enable this synergy by implementing the following business capabilities (Table 2). 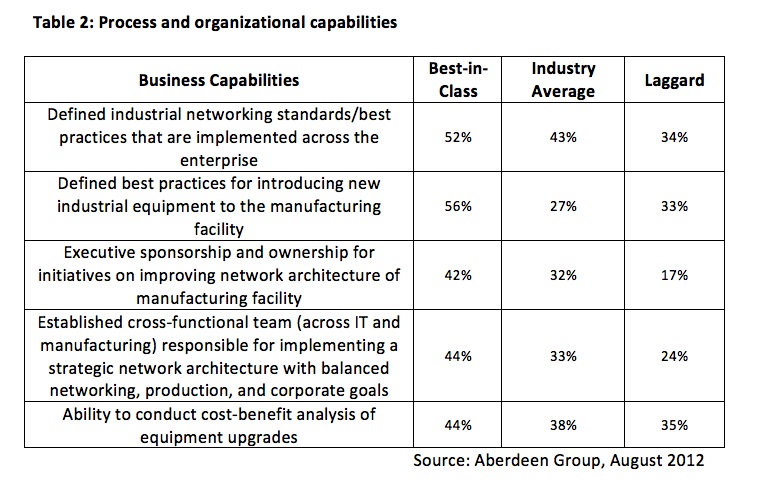 As more manufacturers are seeing the benefits of using Ethernet’s Transmission Control Protocol/Internet Protocol (TCP/IP) technology as their industrial communication standard, network architectures are changing. Manufacturers have to navigate the complex architectures and pick one that will ensure minimal network downtime, all while enabling the same productivity levels.

To overcome this challenge, the Best-in-Class are first defining networking standards and then implementing those practices across their enterprise. Part of the challenge with industrial networking is that a lot of manufacturers do not know where to start. If there is a defined roadmap, it makes it much easier to implement and share best practices across the company. In addition to this, the Best-in-Class have outlined standardized practices for introducing new equipment and incorporating it into the network. When manufacturers do not properly connect their assets to the network, they risk not receiving the critical information from those assets. Providing and sharing these kinds of best practices across the company removes any frustration and doubt, and thus minimizes the time needed to implement, manage and maintain the system.

At the same time, while these business processes are an important foundation, they can’t be implemented without the right organizational structure. The Best-in-Class understand the importance of having an executive sponsor and ownership for improving the network architecture of the facility. Without a true budget holder, it becomes extremely difficult to find the funds needed to invest in equipment, services and training.

Simultaneously, an organization needs a leader to drive the change in the culture. With the developments in technology, it has blurred the traditional lines between business (IT) domain and the real-time domain of control engineering and operations. This in turn has created a cultural battle between automation and control engineers and corporate IT. The Best-in-Class are forming cross-functional teams that include both IT and automation and control engineers to build out a network strategy that has a balanced view from all groups. Issues such as network topology, isolation, security and network management are critical – and why the Best-in-Class are developing teams with the domain knowledge to design, implement, and manage such environments. The cross-functional team needs the knowledge to make appropriate decisions around questions like: ‘How are system upgrades and patches managed?’ ‘How should network traffic be managed to ensure mission-critical applications are getting the bandwidth they require?’ Indeed, these issues cannot be overlooked and they drive the need for an organization to create better alignment between corporate IT and plant IT.

The manufacturing industry is at a tipping point. As more and more facilities adopt Ethernet, it opens up the door to implementing different kinds of technologies that will only help improve manufacturing operations. Therefore, the Best-in-Class are quantifying these benefits and have the ability to calculate the cost-benefit of upgrading to new equipment and implementing the latest technology.

Industrial networks are a different animal from day-to-day business networks. Industrial networks differ from traditional networks in their need for determinism, reliability, and speed in the transmission of data. The network architecture is key to enabling the ability for manufacturers to gain real-time visibility into operations at the plant floor as well as at the executive level. When the network architecture isn’t developed with both of these goals in mind, it leads to islands of disconnected networks from the field level to the manufacturing operations level to the enterprise level. In turn, this leads to many manufacturers having multiple networks at the same layer (with multiple skill sets and software) that do the same thing.

As exemplified in the figure below, by using industrial Ethernet as the backbone for the network, manufactures can more easily integrate their manufacturing and enterprise network. In doing so, they are better able to connect the multiple applications from the field level to the manufacturing level to the enterprise level. 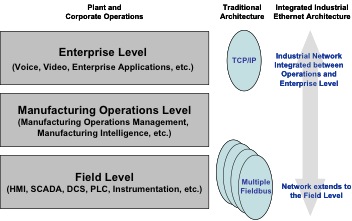 In the traditional network architecture, there is a gap in the ability to bridge manufacturing and enterprise networks because manufactures are not using the same protocol. Instead, at the corporate level, they are only using TCP/IP and at the field level, they use multiple fieldbus protocols.

Indeed, before an organization plans on implementing industrial Ethernet, they need to understand that it takes a combination of organization restructuring, defined best practices, and the ability to have real-time visibility from the network, to the plant level, to the executive level.

Aberdeen’s research has seen decision-makers at both the plant and enterprise level demand greater transparency to sense, detect, decide, and respond in time to take corrective and preventative action. Companies are looking to adopt the latest industrial networking technology to harness the real-time capability of the plant floor. To find out more about how the Best-in-Class are successfully implementing a reliable Industrial Network, read Aberdeen’s Industrial Networking: Real-time Foundation for Manufacturing and the Enterprise.