Canadian manufacturers lag behind their peers in other advanced economies when it comes to technology adoption. Turning that situation around is not simply a matter of investing in and implementing technology solutions. 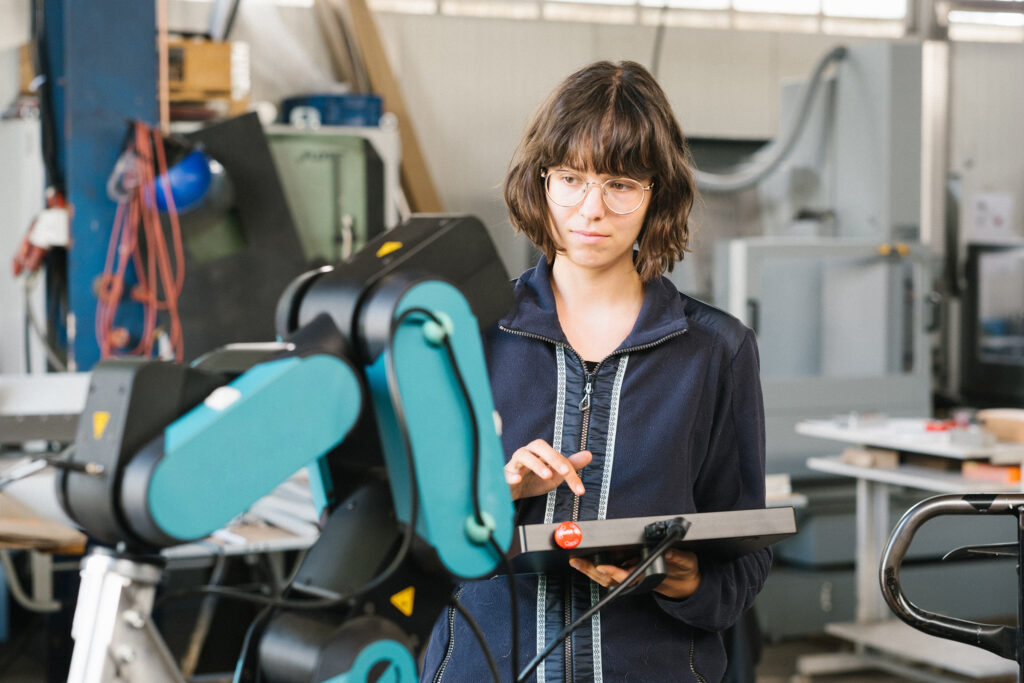 In the 2022 Federal Budget, the Government of Canada singled out “innovation and productivity” as the “Achilles heel” of the Canadian economy.

The issue is not a lack of brainpower – Canada is home to Nobel-prizewinning tech scientists and some of the most respected technology companies in the world. Canadian companies in most sectors, however, have been slow to adopt these technologies compared with their peers.

“This is a well-known Canadian problem – and an insidious one,” reads the Foreword to the budget. “It is time for Canada to tackle it.”

Planned countermeasures include the creation of the Canadian Innovation and Investment Agency, designed to draw on international best practices to give Canadian companies “the tools and incentives they need to create and invent, and to produce more with less.”

“There were about 80,000 job vacancies in manufacturing and our unemployment rate in manufacturing is 3.3 percent, which means we’re in a really tight labour market,” says Dennis Darby, CME president and CEO.

Automation helps companies produce more with fewer resources, but only if companies can recruit and retain the workers to operate that technology.

“The one thing I really worry about is the fact that companies are saying, ‘I’m not even going to invest in robotics or automation until I can be sure I can get the staff to run it,’” says Darby.

Workers will need a broader range of skills to thrive in increasingly digitized environments. On one hand, they will have to understand existing manufacturing processes, and on the other, develop competencies in handling a new generation of digital tools.

“What we need is workers’ time to be used more efficiently, and that’s where machines can help,” says Darby. “If you can have an operator assembling more parts with robotics, that improves productivity and makes us more competitive.”

Accordingly, collaborative robotics, where skilled employees work side-by-side with robots that execute physical tasks such as lifting and transporting, is the fastest-growing segment of the robotics industry.

The need for workers with high-tech skills will force manufacturers, already facing a tight market, to compete with other sectors for talent. “Those skill sets are very transferable across a number of different sectors,” says David Adams, president of Global Automakers of Canada, “so I think we’re going to continue to see a highly competitive workspace for those people.”

“Our members have told us that the top challenge in attracting qualified people is competing against big tech firms and the growing distribution industry,” says Chris Gardner, senior vice-president of operations at Automotive Aftermarket Suppliers Association (AASA).

Colleges are evolving their industrial training programs rapidly to keep pace with these trends. “Our faculty are continually asking the industry how we need to evolve and upgrade our labs and our shops,” says Melissa Groves, associate dean, Electrical, Transportation and Innovation at Mohawk College in Stoney Creek, Ontario.

The automotive sector’s transition to electric vehicles is a major change driver. “Everything is very electrical now,” says Groves. “When we talk with our automotive partners, they no longer just want somebody who is good with a wrench – they want electricians and people who can go onto a computer and log onto that technology. So, the demographic and the skill sets that are required are definitely shifting.”

“Electrical vehicle production, for all intents and purposes, probably requires fewer people, but people with different skill sets than factories that were producing internal combustion engines,” says Adams. “I think the reality is that you’ll need people with the same skill set of a diagnostician as opposed to an assembly line worker.”

A complicating factor is that manufacturing environments typically host a blend of new and older technologies. “Mohawk College is looking at how we can continue to advance our manufacturing labs so we can simulate those automation and instrumentation systems with older and newer digital technologies working together,” says Groves, “because that’s what we consistently hear from our industry partners. They don’t necessarily have the newest high-end technology, so we have to teach our students to work on both.”

As the work of skilled trades becomes more technical, the interaction between engineers and operators is also increasing. “We’re seeing an integration of engineers and skilled trades,” says Groves. “There’s so much more in terms of cross-functional teams in manufacturing organizations in sectors like steel, energy, and automotive. So we’re really trying to ensure that our students are ready for that.”

Schools can’t fill the gap alone, however. Many of the skills required can only be learned in a live manufacturing environment. To this end, the Canadian government supports the Red Seal apprenticeship, which blends classroom learning with extensive on-the-job training. However, according to John Breslin, national director of skilled trades for Unifor and a board member of the Canadian Apprenticeship Forum, the need for hands-on training is often under-appreciated.

“People think that with skilled trades, you can just walk in there and take an apprenticeship course, but it doesn’t work like that,” says Breslin.

In Europe, especially Germany, attitudes are very different. “In Germany, skilled trades are treated like doctors,” says Breslin. “There’s professionalism attached to that, so people are proud to be in the trades. Companies are going to need these people.” Germany is, notably, among the world leaders in technology adoption.

Mohawk College initiated the Apprenticeship Community Hub, which works to dispel some of the myths about skilled trades. “When people see how much math is required, and the kind of precision these tradespeople have to work with, those myths are easily dispelled,” says Groves. “So, we’re working very hard to get that message out to younger people – we’re currently looking at going into the elementary schools.”

While acknowledging the challenges ahead, Darby sees a bright future for skilled tradespeople. “I would highly recommend anybody coming into the workforce,” he says. “This will be a very vibrant sector for years to come. And if you go into an automotive assembly plant, by and large nobody’s doing heavy lifting anymore. They’re using automation to move things around, and the humans are coordinating to make sure it all works.”

This article was first published in the September/October 2022 issue of Manufacturing AUTOMATION.