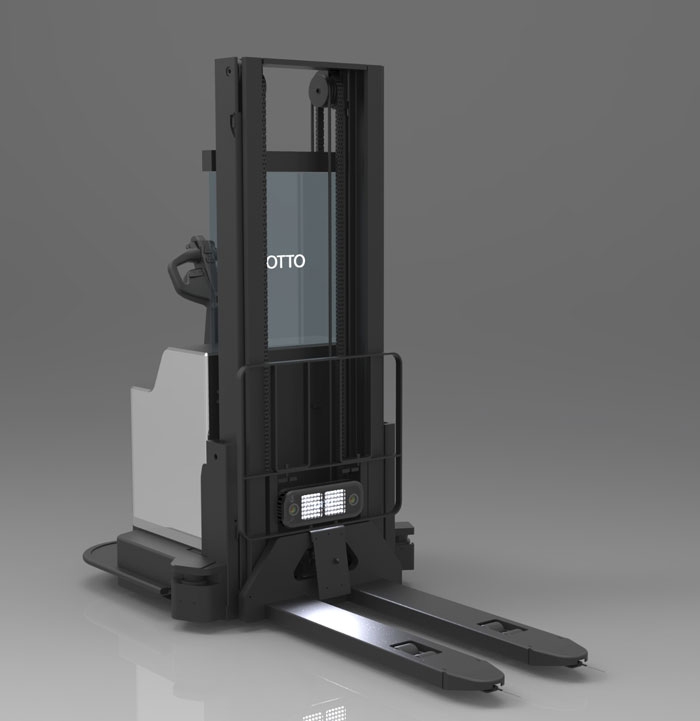 September 11, 2018 – Matt Rendall, CEO of OTTO Motors, says that the release of OTTO OMEGA, the company’s new self-driving lift truck, at IMTS 2018 has been the realization of a longtime goal.

“The autonomous forklift has been on our roadmap almost since day one,” he says. “We just weren’t ready as a company to tackle that challenge in the first couple of chapters of our go-to-market. Taking the technology that we’ve been investing heavily in with OTTO 100 and OTTO 1500 and now applying it on a lift truck really is a game changer for us. You will be seldom able to find an operation that doesn’t have at least one fork truck inside their facility. Our vision is to put an OTTO in every factory in the world.”

Designed to increase efficiency and improve plant safety, OTTO OMEGA is unlike other lift trucks in that it is able to react to changes on the factory floor in real-time, use laser-based perception to navigate around obstructions and learn new behaviours as it moves along using its advanced artificial intelligence system.

OTTO OMEGA constantly collects data from its surroundings while communicating with a centralized control system. The vehicle receives orders, reports on its status and notifies human operators of issues.

The vehicle specializes in two jobs: autonomous floor-to-floor deliveries and a semi-autonomous mode, where workers can work with OTTO OMEGA by taking over complex loading or unloading tasks, such as pallet deliveries. The lift truck can pick up and drop off skids fully autonomously, receive items to be put away, deliver parts to production lines, cross dock, transport trash – everything from storage to shipping.

Operators can make changes anytime with the OTTO Fleet Manager software, which connects OTTO vehicles to the user’s production process for higher levels of efficiency and control. For example, a user can download the software to an iPad and see their floor plan, the jobs OTTO is doing, battery life and future tasks. They can use the software to make changes to job types, schedules and where the vehicles can move.

Rendall says that in addition to allowing companies to automate delivery routes with lift trucks, the OTTO OMEGA may serve as a springboard for SMEs to start incorporating automation into their production. The goal is to eventually offer the vehicles on a monthly subscription service to keep costs lower. “Traditionally, automation systems have very, very high upfront costs, and larger companies are the ones typically that can invest in that infrastructure and build a competitive advantage at scale,” Rendall says. “We’re very excited about what this means for small manufacturers.”

OTTO OMEGA will roll out to select partners over the next year to measure success and establish case studies before it heads to market.