Despite the alleged advantages that IIoT appears to offer, questions remain for many companies, such as: Why is it even necessary? 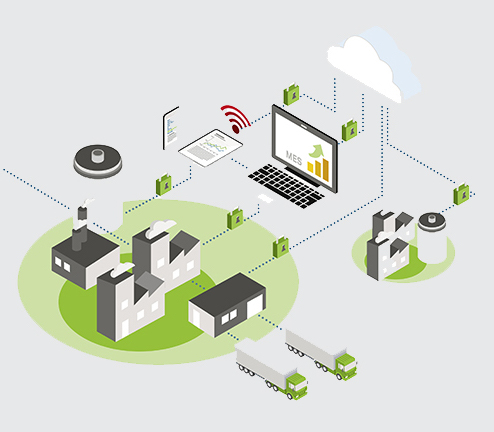 The networked, intelligent, self-controlling, self-optimizing and resource-efficient production is the central scenario of the Industrial Internet of Things (IIoT) – the smart factory.

Despite the alleged advantages that IIoT appears to offer, questions remain for many companies, such as: Why is it even necessary? What level of their own production must attain 4.0? What steps should be first on their path to the smart factory?

It is undeniable that an intelligent, resource-efficient, and cost-efficient production is gaining significance against a background of increasing international competition. The advantages of IIoT will therefore produce results and will drive competitive advantages for factories and process plants in North America.

Companies are looking to maintain their core competences when it comes to manufacturing. To be competitive in the global economy, there are significant efforts to reinforce production operations using a maximum level of automation to reduce costs while increasing product quality.

With the use of an increased level of automation, modern infrastructure, IT expertise, and proximity to regional markets, companies are beginning to relocate their production base back to North America. In this context, there are those in the industry who are already talking about re-industrialization.

In order for North America to remain an attractive location for manufacturing companies, these corporations must also be in a position to manufacture profitably, even in the context of individualization and globalization. The ability to manufacture products according to lot size without substantially increasing production costs will be an indicator for the smart factory with companies.

The future success of producing companies will be determined by their changeability and the ability to network to a high degree along the entire value chain – right up to the end product. How this will be specifically implemented in production essentially depends on the the existing underlying conditions.

The smart factory cannot be imposed as a solution. Instead, it must be the smart version of an extant production line — and must be as individual as the processes of the producing company itself.

Before considering how IIoT can be technologically introduced into existing production, there must be consideration as to which ideas, methods or approaches can lead to an improvement in the existing individual production processes. These improvements may include an efficient use of resources during production, preventing duplication of applications along the value-added chain, or significantly shortening system engineering times.

For example, there are potential advantages for machine and system designers in observing a system after the sale and obtaining as much data from the life cycle as possible. This would produce conclusions that would apply to refinements in their own work, or would enable them to provide recommendations to their clients about operating the machines.

No matter which method is applied for transitioning from the merely extant to the smart factory, networking of existing processes and operations remains a prerequisite. This networking includes the vertical, namely from the control system to the field level, as well as the horizontal, which extends beyond the various steps in the value-added chain.

The only opposition to this type of complete networking today is that the data cannot be consistently generated and used. Diverse media and system discontinuities, which occur in both the vertical but primarily in the horizontal integration, introduce difficulties in correlating data logically and sensibly across processes.

As a rule, each IIoT approach initially proposes recording data, digitizing it, and linking each together in a profitable way. This step is the central thought driving IIoT: collecting, networking and evaluating data from the production process in order to exploit them profitably such that a sustainable added-value is generated for the corporation.

Data transparency for the smart factory

The essential criteria which characterize a smart factory are those that enable the measuring, networking and evaluation of data:

The first step along this path is transparency across all production and system data. Only when the data has been brought into context with one another, processed and consolidated into information, can measures be introduced to improve the production process.

For this to succeed, sensors must record product- and production-relevant data at the field level. These sensors have to be considered in the system architecture or incorporated into the product itself. One example is the use of RFID chips. With regard to production-relevant data, which is recorded via sensors on the machines and systems, the challenge consists less in the mere collection of data, but instead in bringing information securely and error-free from the field level into a higher level, like a MES (manufacturing execution system) or the cloud.

With the relatively high expectations to transfer and store data in the cloud, it does not make sense to have raw sensor data sent directly to higher level systems. So how does this work?

Automation edge controllers can provide a decisive contribution, like the modular WAGO-I/O-SYSTEM 750, which offers a solution for any application with its more than 500 different modules. Signals can be collected reliably from the field level and managed locally on the plant floor.

WAGO’s PFC edge controllers with different interfaces and fieldbuses can be used to collect data from field sensors and devices independent of manufacturer, via CANopen, Profibus DP, DeviceNet and MODBUS/TCP. The edge controllers can also be incorporated into already existing automation systems such as scalable nodes and gateways, which can be retrofitted without having to interfere with the actual automation process.

The data can then be aggregated into abridged information that is transmitted to a higher level (MES or cloud). In this context, the advantages connected with a cloud link initially appear quite promising: cloud solutions are flexible, scalable, highly available and provide the opportunity for centralized access. 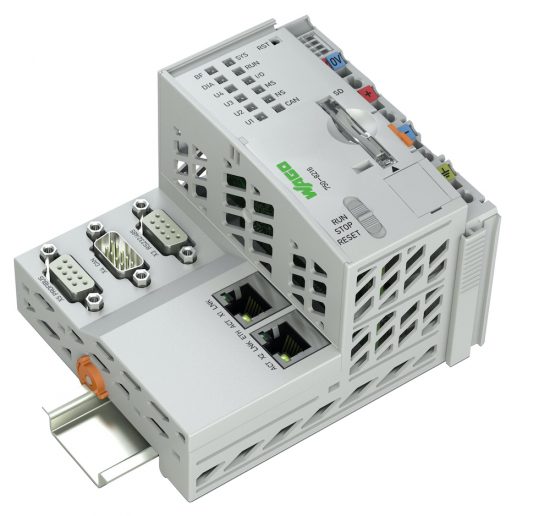 As an example, you can look at what Patterson-UTI implemented for their edge computing application. Engineers needed the various systems of their land-based drilling rigs to communicate with one another while also keeping them isolated. This created quite a challenge when the control system and the data collecting hub needed to be on separate networks, but because of this, could no longer communicate directly with each other.

The solution for Patterson-UTI came from using the WAGO PFC200 as an edge controller IIoT gateway. The PFC200 is an IIoT gateway that collects data from all of their systems, working as an aggregator. It is able to share data with stakeholders who needed information while protecting the systems that needed to be isolated.

With WAGO’s PFC200, Patterson-UTI is now able to collect data from all of their systems while keeping those systems safely isolated from each other. “We couldn’t easily integrate these two systems because each one of them lives on different networks,” says Mahmoud Hadi, control and automation manager at Patterson-UTI. “We want to have restricted exposure while each system can access the other system.”

According to Hadi, what differentiated WAGO from other competing data aggregators were the many features the PFC200 offered and the direct support they received during the decision-making process.

The Patterson-UTI team learned about how the PFC200 could be a perfect fit for their operation with the assistance of a WAGO Applications Engineer who helped them understand how using WAGO products could provide all the benefits they sought.

“It’s a really fantastic win for WAGO and Patterson-UTI,” says John Hagar, WAGO regional sales manager. “The PFC200 can talk either MODBUS or Profibus, so they can put one of these on existing oil rigs and very easily – over OPC UA and MQTT – make the data available to the end customer.”

Control engineer Vijay Aundhekar says the WAGO PFC200 has made operations much easier. “Our process has been simplified because WAGO has created a simple one-solution-for-all,” Aundhekar says.

Patterson-UTI’s access to WAGO’s extensive online libraries was another reason for deciding to use the PFC200 according to Wayne Steed, Patterson-UTI control engineer. “Making sure that the libraries are specific to each protocol we were using and the different logic we were trying to implement in the gateway was very valuable to us,” he says.

“WAGO designed-in OPC UA and MQTT capability in its PFCs in order to make them IIoT-ready,” Hagar explains. “This enables them to talk to Amazon (AWS), IBM (Bluemix), Microsoft (Azure), or other cloud-based data center solutions.”

To keep from drowning from the resulting data flow, applications for local data analysis and control with edge controllers play a decisive role.

If they are incorporated correctly and make use of the individually relevant key performance indicators (KPIs), then the existing process can be fundamentally improved, depending on where one places the focus, i.e., time, resources, or energy.

Thus, more is accomplished on the road to a smart factory than in a single step.