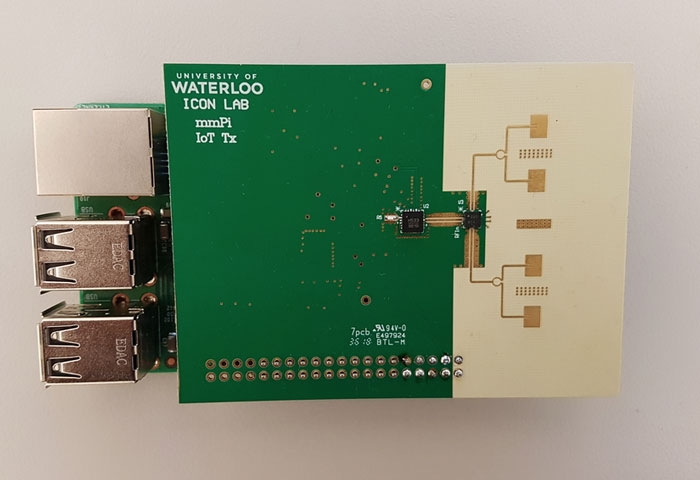 August 29, 2019 – Researchers at the University of Waterloo have developed a cheaper and more efficient method for Internet-of-Things devices to receive high-speed wireless connectivity.

With 75 billion Internet of Things (IoT) devices expected to be in place by 2025, a growing strain will be placed on requirements of wireless networks. Contemporary WiFi and cellular networks won’t be enough to support the influx of IoT devices, the researchers highlighted in their new study.

Millimeter wave (mmWave), a network that offers multi-gigahertz of unlicensed bandwidth — more than 200 times that allocated to today’s WiFi and cellular networks, can be used to address the looming issue.

In fact, 5G networks are going to be powered by mmWave technology. However, the hardware required to use mmWave is expensive and power-hungry, which are significant deterrents to it being deployed in many IoT applications.

“To address the existing challenges in exploiting mmWave for IoT applications we created a novel mmWave network called mmX,” says Omid Abari, an assistant professor in Waterloo’s David R. Cheriton School of Computer Science, in a release. “mmX significantly reduces cost and power consumption of a mmWave network enabling its use in all IoT applications.”

In comparison to WiFi and Bluetooth, which are slow for many IoT applications, mmX provides much higher bitrate.

“mmX will not only improve our WiFi and wireless experience, as we will receive much faster internet connectivity for all IoT devices, but it can also be used in applications, such as, virtual reality, autonomous cars, data centres and wireless cellular networks,” says Ali Abedi, a postdoctoral fellow at the Cheriton School of Computer Science.

The study, “A Millimeter Wave Network for Billions of Things,” authored by Waterloo’s Faculty of Mathematics researchers Abari, Abedi, and research assistants Mohammed Mazaheri and Soroush Ameli, was recently presented at the ACM SIGCOMM 2019 conference.