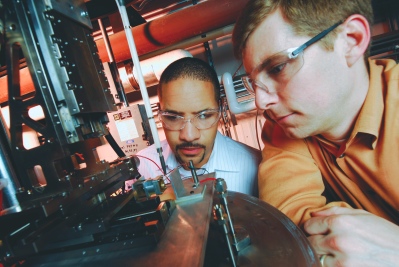 As employers across the country continue to shed hundreds of thousands of jobs, many manufacturers are facing an ironic dilemma. As they eliminate positions — mainly repetitive, assembly type jobs — they still have unfilled job openings for high-skilled workers. According to a recent survey conducted by Deloitte, the Manufacturing Institute and Oracle, “almost one-third of responding companies report some level of shortages today.”

These shortages of high-skilled workers are particularly acute within “the most profitable companies, aerospace and defense and life science sectors,” and among “skilled production workers, scientists and engineers.”

“This is certainly an employer’s market, but not as much with manufacturers,” says Mark Tomlinson, executive director and general manager of the Society of Manufacturing Engineers.

“Manufacturers are looking for employees who are the opposite of the stereotypical factory worker doing repetitive, assembly line work. They are in need of 21st-century workers with specialized technical training such as machinists, operators and technicians,” he adds.

The survey also shows that many manufacturers are “not acting” on finding these types of workers or are depending on largely ineffective “traditional approaches to managing and developing their employees,” like current performance, rather than on the latest “talent management trends” such as “Lean and industry-recognized skills credentials.”

Respondents to this survey also reported dissatisfaction with the skills of their current employees. Nearly half indicated many workers have inadequate basic employability skills, such as attendance, timeliness and work ethic, while 46 percent reported inadequate problem-solving skills, and 36 percent indicated insufficient reading, writing, and communication skills.

Tomlinson believes these trends bring to light the strong possibility that many manufacturers may be unsure of where to recruit talented workers and contends that “associations can be a one-stop resource to find or even train new, high-skilled workers.”