The outlook for the economy improved as manufacturing sales edged down 0.1 percent to $41.0 billion in April, according to Statistics Canada’s Monthly Survey of Manufacturing. 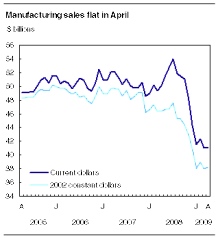 Although manufacturing sales remaining largely unchanged in April, sales decreased in 16 of 21 manufacturing industries. The weaknesses were offset by a 16.4-percent gain in the transportation equipment industry. Production in the aerospace industry increased by $714 million in April, following a $626 million decline in March. Motor vehicle parts manufacturers also reported a 19.4-percent sales gain, reversing most of the 20.5-percent drop in March.