Having reduced its losses through the fourth quarter of 2009 — but still in the red — Magna International is looking toward the future at the green vehicle market. The Aurora, Ont.-based company is eyeing the opportunity to expand is manufacturing capabilities and assemble complete electric cars for automakers.

On the financial side of things, Magna reported this past Thursday its net loss in the final three months of 2009 narrowed to US$139 million from US$148 million in the same 2008 period. This left Magna with a loss of US$493 million for the year.

According to the Toronto Star, Vince Galifi, Magna’s chief financial officer, said the company expects some recovery in North America this year, but he warned that the outlook isn’t so bright in Europe, the manufacturer’s other key market.

In a bid to ride the wave of innovation in electric and hybrid vehicles that is starting to transform the auto industry, the Globe and Mail reported that the Canadian auto-parts giant wants to assemble complete electric vehicles. While the possiblity remains for the company to create its own designs, it is primarily interested in manufacturing vehicles for other automakers.

“The way we want to do complete vehicles is in conjunction [with] or for our customers,” co-chief executive officer Don Walker told the Globe and Mail. “If we can work with two, three, four car makers to pool our resources, pool our R&D, help develop vehicles on their platforms, if we wanted to do a unique platform with them, that’s what our focus is.” 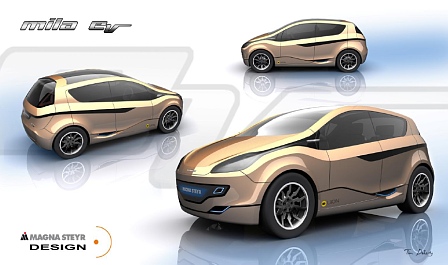 Magna was key in this area with Ford by developing a battery-powered Focus that Ford is currently testing; it plans to begin selling next year. Magna also showcased an electric vehicle, called the mila, at the 2009 Geneva International Auto Show.

But according to the Globe and Mail, analysts forecast that with the new strong fuel economy rules come into effect in the U.S. and Canadian markets by the end of this decade, the development of “so-called extended-range electric vehicles,” which rely mainly on battery propulsion, will be a big hit.

In other Magna news, the company has also acquired Karmann Japan Co. Ltd., a manufacturer of convertible tops and a subsidiary of Germany-based Wilhelm Karmann GmbH.

Magan is also exploring non-auto energy projects, too, such as those in the emerging solar and wind-power sectors.
www.magna.com