The Lapp Group celebrated 50 years of Olflex – the first industrially produced flexible colour-coded signal cable – at its North American headquarters in Florham Park, N.J. last week, and Manufacturing AUTOMATION was the only Canadian publication invited to the festivities.

The manufacturer of wire and cable technology, cable accessories, industrial connectors and communications technology celebrated the milestone with more than 200 customers and employees from Canada, the U.S. and Mexico in New Jersey – the eighth stop on a world tour of the Olflex cable drum, which is travelling to Lapp locations across the globe to commemorate the anniversary. 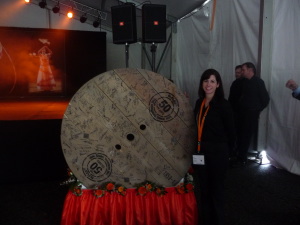 Oskar Lapp invented Olflex, the company’s signature cable brand, in 1959 in Stuttgart, Germany. He and his wife, Ursula Ida Lapp, ran the company – then called U.I. Lapp KG – out of their family home, where they lived with their children.

Though they hit this 50-year milestone back in 2009, celebrations were put on hold due to the recession. The world tour of the Olflex drum kicked off last June in Stuttgart at the company’s global headquarters, and the drum has since appeared in celebrations at Lapp offices in France, Spain, South Africa, India, China, Japan and Chile.

“The concept of this world tour is symbolic of the journey of Olflex and the trip it has taken around the world in its 50 years,” Marc K. Mackin, president of Lapp Holding NA, said at the celebration. “Born in Germany, and now known around the world, the celebration of 50 years of Olflex is a story of a vision conceived in another generation that has withstood the test of time.”

There are three generations of the Lapp family still involved in the company, including Ursula Ida. Two of those generations were at the North American celebration – sons Siegbert and Andreas Lapp, and grandson Matthias Lapp.

“We started with our family house – first floor was offices, second floor was where we lived. So my mother was jumping from first floor to second floor [to make sure] that everything worked in the business and that we did our homework,” Andreas Lapp recalled of the company’s early years. Andreas is now the chairman of the board of directors of Lapp Holding AG.

What started out of the Lapp family home in 1959 has evolved into a global company. In 1979, Oskar Lapp opened a U.S, branch, the company’s first overseas subsidiary. Lapp Canada was established in Mississauga, Ont. in 1999. Today, the group employs more than 2,600 people in 40 distribution subsidiaries and more than 100 representative offices all around the world.

“It’s a very nice thing for me to see what started with my grandparents and what the company has become,” said Matthias Lapp. Matthias joined the family business in August 2010 as executive assistant and has aspirations to run one of the company’s divisions some day.

Matthias added that his grandfather, who died in 1987 from heart disease, would be very proud to see what the company has become.

And what the company has become, according to customers and employees at the event, is an extension of family. Zack Cvitak, vice-president of sales and marketing for Lapp Canada Inc., agreed with that sentiment.

“It is very exciting to represent Canada at the 50 years of Olflex event. To be part of a family organization that treats all of their employees as one of their own family members is a phenomenal feeling,” he said.

Though the company has grown across continents, it has managed to keep the spirit of a family business. Andreas had a very simple explanation as to how they’ve managed to keep this philosophy – you treat everyone like family. “Say hello, not just to your boss or to the next level higher, say hello to the gardener. Shake the hand of the lady who is cleaning the room….Smile when you enter the office on Monday morning. Don’t forget the birthday of your colleague. When you welcome a new employee, place a bunch of flowers on the table. This is our philosophy.”

And what sets them apart from other companies, according to Andreas, is their approach to selling. “We don’t sell cables. We sell commitment. We sell love. We sell trust,” he said, speaking to customers and employees at the event. “We are really grateful that you are here with us to celebrate the occasion of the 50th anniversary of Olflex, and we have to thank you…Thank you very much for coming and thank you very much for your trust in Olflex.”

During the celebration, the Olflex drum was welcomed into the party by a marching band to the tune of “When the saints go marching in,” and a sea of orange flags waved by employees and customers. Following this welcome, guests got a tour of the 130,000-square-foot Lapp North America headquarters, including a look at the cable manufacturing process and the new testing laboratory. The day’s festivities concluded in the evening with a Gala event.

Next, the Olflex drum will head to Sweden and then the Netherlands, before circling back to Stuttgart in July to conclude the yearlong tour.