I’ll start this column with the usual farm story. I was coming home several years ago from a weeklong trip. Because of the parking fees, I had my bride drive me to the airport and I rented a car to drive home.

When I returned home, I pulled into the driveway and around to the back door, picked up my luggage and walked to the entrance. At that moment, I remembered the famous Sherlock Holmes dog story, where Holmes identified the guilty by noticing that the dog at the scene did not bark the night of the crime. Therefore, the criminal was someone the dog knew.

My dogs did not bark when I drove up. We have a dog that lives with us that twitches when strangers approach the house, and two Rottweilers that live in a kennel 50 metres from the back door. But none of the dogs barked when I arrived home. It was late at night, I was driving an unfamiliar car, and all the windows on the car were closed. Vision and smell were therefore excluded as detectors, yet the three dogs knew that the boss was back. 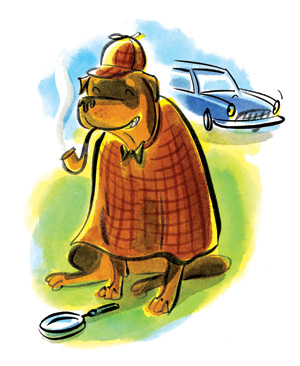 How did they know? The question kept me awake for many minutes.

I awoke the next morning with verve and courage. An intern from McGill University, a math expert, was working at the office and we pondered the question all day until we finally figured out how the dogs knew it was me. They used statistics across many sensing domains. We assumed that the dogs heard the engine dynamics, the parking location, lighting performance and a myriad of other low-resolution sensor measurements. My intern tackled the math, and we discovered that a single sensor resolution can only grow proportionately to the
resolution of that sensor.

For example, suppose you want to recognize people by weighing them. If only two people are in the set, you can use a trip mat with an on/off trigger to determine their weight. If, however, you want to select from a group of 10, you need a scale of commensurate accuracy. The scale resolution has to track the number of individuals in the set. As the group gets larger, clothing weight and change in body weight must also be taken into account for each of the individuals.
“
Individuals in large groups are not easily recognized or analysed. Data mining is used for analysis of credit card files. The technique is to use multiple parameters simultaneously across activity and history, and in real time. We suspect that my smart dogs were treating the real-time environment as a data mining application.

Using that assumption, we attempted to apply the same philosophy to general sensing using computers. The math suggested that by using multiple sensor probes we could analyze large sets. The ability of multiple sensors was exponentially proportional to resolution. Read that sentence again. Each single sensor needed to have some resolving power, but using two sensors doubled the ability to “see” in the noise of the environment. Three sensors cubed the resolution and so on. When we want to identify a person, we would use weight, tread, voice timbre and other behaviour. We could recognize signatures with a sampling of individual weight, pressure on the pen and size of signature.

By now your eyes are clouding over. Patience. Sometimes the important stuff hides behind simplicity. My dad always said, “If you are comfortable, you are doing something wrong.” Here comes the uncomfortable part.

We will assume that the sensing problem is a real-time database issue. At the beginnings of the PLC, we just brought in data from other calculations along with the external sensors. We did not discriminate between the two sources of data. Information cannot be stored, only transmitted. We can, however, store data or knowledge.
“
Information is what you don’t know. Data compression works on this idea. Only send new information and refill the changes necessary to update an image on the web. The implication is that the measurement should be loosely connected to the desired measurement. If we make a temperature measurement with a junction, we already know some things about the temperature.

I’ll offer another example. If I want to know the content level of the propane tank used for the BBQ, I can use a simple weight system attached to the BBQ. But when I need confirmation, I tap the cylinder and feel the temperature difference along the tank. Just like the dogs, we often use our senses without thinking.

In North America, we think components, not systems. A multi-sensor-based system can give high resolution at low cost. Rather than making better components, use simple basic physical measurements with modern math and database analysis. Put your competition out of business by being smarter, not by working harder.

Dick Morley is the inventor of the PLC, an author, speaker, automation industry maverick and a self-proclaimed ubergeek. E-mail him at morley@barn.org.
Print this page

Related
Climb aboard Horse 7.0: You can’t escape the smart car of the future
Christening the controller: What you don’t know about the birth of the PLC
K.I.S.S.: It is often the simplest solutions that work the best
To Russia, with love
Tags