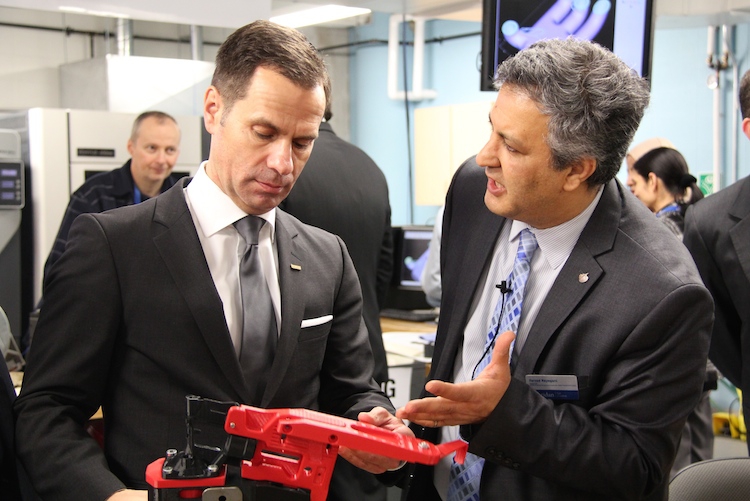 The Siemens Mechatronic Systems Certification Program is an industry skills certification offered together with partner schools worldwide. A central theme is the System Approach, a special set of teaching and learning methods developed over 25 years in Siemens technical schools in Germany.

Mechatronics is the integration of mechanics, electronics, control and systems theory, and computers into a single system used within production and manufacturing, to optimize its efficiency, productivity, and quality. First developed at Siemens’ Technik Akademie Berlin in Germany, Siemens Canada can now provide a three–level Mechatronics certification program to students in collaboration with universities and colleges across Canada.

“It is very important for Siemens to create a culture of continuous learning,” said Robert Hardt, president and CEO of Siemens Canada (photo 1), saying the MOU signings “reconfirms Siemens’ commitment to education and training that is supported and driven by key partnerships with Canadian colleges, universities and government.”

PHOTOS: Manufacturing AUTOMATION was there on February 13 as Siemens Canada signed its MOU with Sheridan College. Below are photos from the tour of the robotics and programmable control labs, and official announcement. Photos A. Dalton.

With an emphasis on troubleshooting, hands-on practice and technical decision-making, the program aims to provide the Canadian workforce with knowledgeable workers who are able to easily move into a variety of production, technician, and/or engineering roles. Mechatronics-related technical fields include automation technology, robotics technology, process and controls, industrial maintenance, and electro-mechanical technology.

“As a partner in the Siemens Mechatronics Systems Certification program, our Electromechanical Engineering graduates will qualify to write an additional exam to gain this globally-recognized, professional credential soon after graduation – something that’s especially important for our growing population of international students,” said Dr. Jeff Zabudsky, president and CEO of Sheridan College (photo 2). “Our partnership also opens the doors for increased collaboration with Siemens Canada in the form of guest lectures, workshops, co-op placements, and engineering internships.”

“We are proud to be expanding Seneca’s relationship with Siemens, an industry leader around the globe. This agreement will allow our students to benefit from their expertise, receive highly-specialized training and have increased experiential learning opportunities,” added David Agnew, Seneca College president.

In 2014, Siemens Canada signed educational collaboration MOUs with five colleges and universities: the University of Waterloo, McMaster University, Mohawk College, the University of Alberta, and the Northern Alberta Institute of Technology (NAIT).