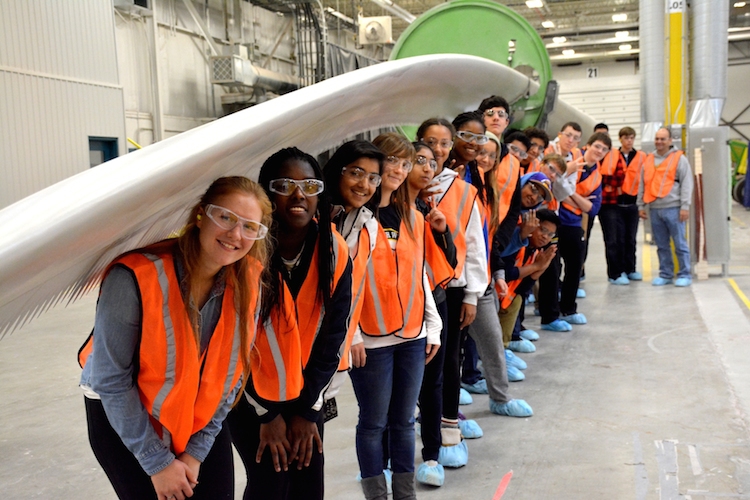 Feb. 27, 2015 – “With how the worldwide manufacturing industry is changing, you see more and more technology from the IT world coming into manufacturing: the Internet of Things, new tools and new processes,” says Robert Hardt, president and CEO of Siemens Canada. “Young people will face a totally different set of requirements in the near future. We need to make sure, as companies and as a society, that both secondary and post-secondary schools start to adapt to these systems.”

In an effort to help prepare students for this new direction, Siemens Canada and Halton Learning Foundation (HLF) — a charity that aims to enrich educational opportunities and eliminate economic barriers to learning for Halton District School Board students — have partnered for an educational program that allows Siemens employees to come into high school classes to motivate, guide and mentor the students.

Oakville, Ont.-based Garth Webb Secondary School was selected for the partnership because of its advanced manufacturing and robotics programs, which feature a hands-on lab where students can learn about different types of technology, and how it works together in the practical field.

The classroom speakers lead classes of various grades — including robotics, careers, civics and law — and provide valuable insights into the working world, and the changing technologies that are shaping the future. The idea is that students will get to learn exactly what it means to be an engineer, a project manager or law professional in the manufacturing world.

With a focus on what technology and science means to them, the speakers also share their own career path experiences and help answer questions on what career a particular post-secondary course can lead to.

“I think technology should be seen as an integral part of the school. It’s something everyone should be taking, as opposed to being hidden in the back of the school for only a certain percentage of students,” says Paul White, technology and business department leader at Garth Webb.

Along with the mentoring aspect, Siemens Canada donated $15,000 to HLF in September to help students who require additional financial assistance, as well as support the school’s advanced manufacturing and robotics programs.

Connecting the dots
The students can visit the company’s manufacturing facilities to learn first-hand about a typical workday. The first trip was a guided tour of the Tillsonburg, Ont., wind turbine manufacturing facility, where students got to see employees cut materials and work with the blades directly on the production line.

“We got phenomenon feedback,” says Hardt. “We have some young engineers at our office and because of the similar generations with them and the students, they could easily strike up conversation. The students were able to see how our engineers transitioned from school life to work life. It was quite positive to see.”

He notes that by showing the skills needed in a manufacturing environment, students can see how classroom learning translates to real- world application.

“Students can gain the total perspective they aren’t able to from a book or a lecture. I think you really must bring young people to the ‘real action,’” he says.

One of the questions educators are always asked by students is When am I ever going to use this?, laughs Larry O’Malley, principal of the school. He says he has been pushing for innovative technology programming at the school since it opened its doors September 2012. It was great seeing how the students’ eyes were opened when they saw their curriculum being used in a real working environment, he says.

Similarly, eight Garth Webb students visited the company’s Canadian head office on November 5 for Take Our Kids To Work Day to see how engineers work in an office environment, “which is quite a bit different from the manufacturing side,” says Hardt.

It’s time to educate
As evidenced by many published reports, it’s no secret that the skilled trades need new blood, so why aren’t more young people applying? White believes university-bound pressure from parents is a strong factor.

“I read a study that surveyed a number of parents and while a majority of them agreed that skilled trades jobs are in demand and well-paying jobs, most say those jobs are fine for someone else’s kids… but not their own.”

According to White, greater understanding of advanced manufacturing will challenge negative stereotypes and encourage young people and their families to explore these career choices. Two misconceptions of the industry that could act as turns-offs, he says, is the belief that the work environment is dirty, dark and greasy, and that jobs are leaving North America. “But that’s not the case with advancing manufacturing here,” he says.

He says he has seen a “dramatic shift” over the last five to six years in attitudes that place higher value on university education. He believes partnerships like this, in addition to the increase of joint university-college programs, can help spread awareness of the various post-secondary options.

“Schools need vibrant and energetic tech programs for kids who enjoy learning in a hands-on, practical way,” says O’Malley. “It’s important all students be able to take the courses they want to take, and that all pathways for post-secondary destinations are being honoured.”

As a result of the success with Garth Webb, Siemens Canada says it plans to extend the program model to other high schools across the country.

This feature originally appeared in the January/February 2015 issue of Manufacturing AUTOMATION.