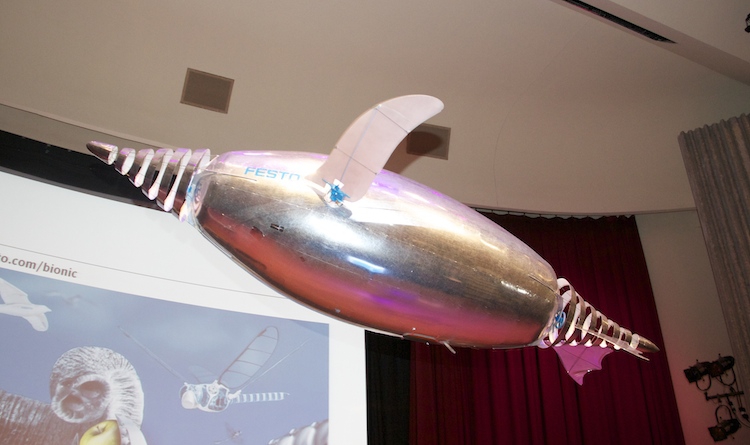 Mar. 5, 2015 – Manufacturing AUTOMATION was there last night as Festo Canada celebrated its 40th anniversary with a media event with executive presentations and a demonstration of its various flying bionic robots.

“Over the past 40 years, Festo has become a substantial part of the Canadian industrial landscape,” said Thomas Lichtenberger, president and CEO of Festo Canada. “We have built strong relationships with our customers from coast to coast, thanks to our unique and holistic approach to meeting their requirements. As a product innovator, solutions provider and leading industrial educator, Festo will continue to lead industry into the smart factory world of Industry 4.0 here in Canada.”

The event took place at the Ontario Science Centre in Toronto, Ont. Scroll down for photos!

Dr. Eberhard Veit (president and CEO) and Dr. Ansgar Kriwet (board member/global supply chain) flew in from Germany to join their Canadian colleagues Lichtenberger and Greg James (national Didactic manager) for the media event. The speakers discussed the company’s business strategy and gave insight into the production of the future, its challenges here in Canada, and future production trends in the era of Industry 4.0/Internet of Things (IoT).

As part of the Bionic Learning Network, the robots fly by applying some of the principles that nature has perfected over millions of years, encouraging engineers and scientists to imagine how these concepts can be applied in industry, said the company.

“They are learning projects for developing prototypes of breakthrough products of tomorrow that improve industrial automation in particular,” it added.

The SmartBird is modelled after the herring gull, which can start, fly and land autonomously with no additional drive mechanism. The BionicOpter models the complex flight characteristics of the dragonfly — an ultra-light flying object which can fly in all directions, hover in mid-air and glide without beating its wings. Designed after the jellyfish, the AirJelly moves through the sea of air thanks to the movement allowed by the Fin Ray effect, while the AirPenguin is an autonomously flying robotic penguin.

Public demonstrations of the four flying bionics will take place at the Ontario Science Centre daily from March 1-7, which coincides with the centre’s National Engineering Week celebrations.

A player in the automation technology market, Festo has introduced electric motion and process automation to its portfolio over the years. “Customers are able to get both technologies from one reliable source, whichever better suits their process and factory automation needs,” said the company in a statement.