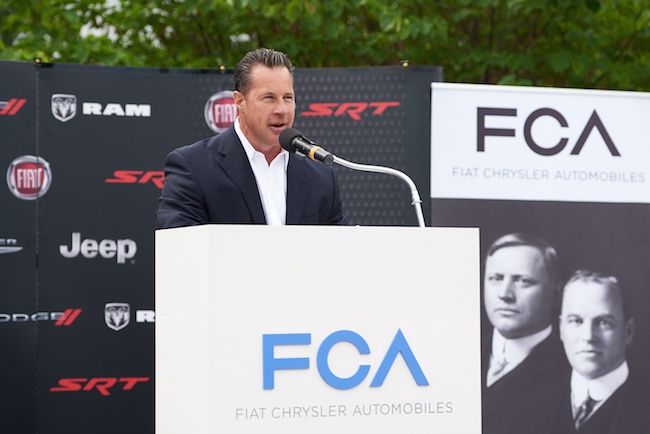 Jul. 3, 2015 – FCA Canada (formerly Chrysler Canada) marked its 90th anniversary last month at a special celebration on the banks of the Detroit River and steps from its Canadian headquarters.

The celebration was attended by employees, senior executives, local media and other special guests. Fittingly, the event was held at Windsor’s Dieppe Gardens, the former location of the Dominion Typograph Company. There, in 1896, the Dodge brothers established their bicycle company, a precursor to FCA’s modern-day Dodge vehicle brand.

“It is a very special honour to help commemorate the 90th anniversary of FCA Canada,” said Reid Bigland (in photo), president and CEO of FCA Canada. “Over nine decades we’ve grown into the largest automotive company in Canada and a pillar in the Windsor business community. From humble beginnings in 1925 with 181 employees and 4,500 vehicles built, we’ve grown to 10,585 employees, 596,000 vehicles built annually, 440 dealers and a position as the number one-selling automaker in Canada.”