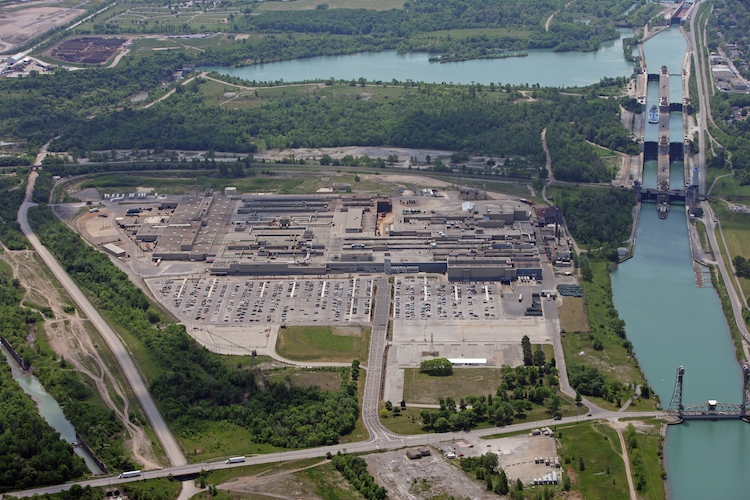 St. Catharines manufactures V6 and V8 engines and six-speed automatic transmissions for a variety of Buick, Chevrolet, Cadillac and GMC vehicles. The plant is located near the St. Lawrence Seaway and Niagara Escarpment, making raw canal water a “natural choice” to help cool the engine facility’s component machining, and to lower building temperatures in the summer, noted company officials.

Here’s how it works: St. Catharines taps into a penstock — similar to a large pipe — that runs parallel to the Welland Canal. The penstock delivers water from a higher elevation to a lower elevation, about a 140-ft. drop, using the force of gravity to feed water to the plant at approximately 40 lb. per sq. in. of pressure.

This micro-hydro system delivers the canal water that cools the plant’s refrigerated chilled water system. This in turn provides cooling water to maintain the appropriate temperature of process equipment in the plant, according to the automaker. Prior to the installation of this renewable energy project, the plant used refrigerated city water to cool building processes, then returned the warm water to a cooling tower to be cooled and used again.

GM says less electricity is now required to run pumps and fans because large volumes of canal water is cooling the refrigeration system. In the winter, no refrigeration is needed at all, with desired cooling water temperatures achieved simply by using a heat exchanger, it says, adding that after the water has been used, it goes back to the Welland Canal at the appropriate temperature.

The facility also eliminated use of cooling towers and the chemicals needed to maintain them. Although St. Catharines’ version of the micro-hydro system does not generate electricity, it replaces processes that require electricity, giving it the distinction of a renewable energy project, adds GM.

GM says during peak periods, gravity-fed, cool water can save 2,000 kW of electricity, which amounts to 8,600 MW of electricity savings annually and avoids 800 tons of CO2 emissions.