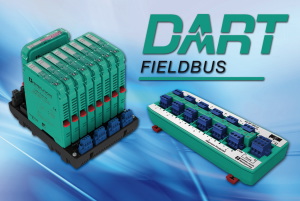 Pepperl+Fuchs’ Dynamic Arc Recognition and Termination System (DART) is a power supply and control system for intrinsically safe fieldbus installations. DART is designed to increase the power available to field devices in explosion hazardous areas, while maintaining intrinsically safe energy levels, the company explains. The system allows for higher direct power, while maintaining limitations on intrinsically safe energy via rapid disconnection. According to the company, “the DART system detects a fault condition by its characteristic rate of current change, and disconnects power before sparking can start.” During normal operation, a DART power supply feeds full nominal power of eight to 50 watts – exponentially more power than the approximately two watts that is normally permissible in intrinsic safety environments. Should a fault occur, the potential spark remains non-incendive, and DART detects the resulting change in current and immediately switches off the power supply. In microseconds, energy from the electrical system is reduced to a safe level, robbing a spark of the energy needed to ignite hazardous gases, the company explains. DART applied to fieldbus provides a much higher intrinsically safe power allowance to the trunk so that the segment can support up to about 32 devices per segment – the maximum permitted per segment. This reduces capital costs by eliminating excessive fieldbus infrastructure, the company says. Moreover, cable lengths as long as 1,000 metres are possible, opening up many application areas to fieldbus technology while maintaining intrinsic safety requirements for all devices and cables, including the trunk line.