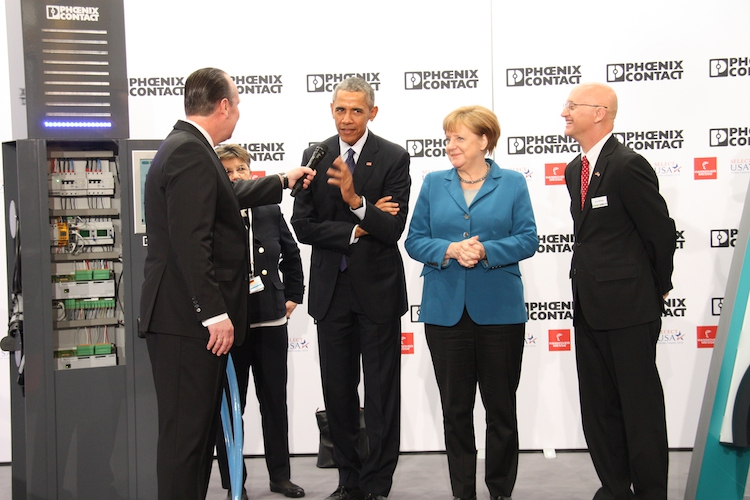 The president and Angela Merkel, German Chancellor, met with Frank Stuehrenberg, Phoenix Contact CEO, and Jack Nehlig, president of Phoenix Contact USA as part of the morning opening of the Hannover Messe  Exhibition.

Stuehrenberg and Nehlig demonstrated to Obama and guests Phoenix Contact’s CCSplus electric vehicle plug for the American and European markets. The CCSplus is a new cable that can charge at up to 350 A, compared to typical charging stations, which are 30 A, says the company, adding that it can charge a vehicle in about three to five minutes.

This year is the first time the United States is a partner country of Hannover Messe, the world’s largest industrial trade show that attracts more than 220,000 people from around the world each year. President Obama is the first sitting U.S. president ever to attend the show.

“We are honoured that President Obama and Chancellor Merkel took the time to visit our company during their Hannover Messe tour,” said Nehlig. “Phoenix Contact USA is an outstanding example of the SelectUSA initiative and how German investment in the U.S. market can benefit both countries.”