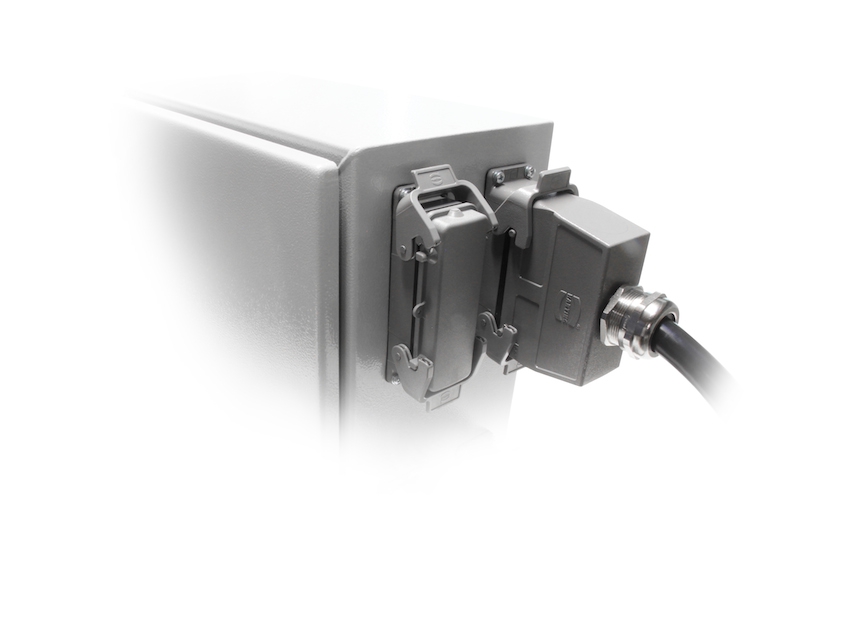 Nov. 29, 2016 – Until recently, an OEM which might have preferred using connectors to wire a UL 508-certified cabinet for the cost- and time-savings they offer over hardwiring also knew it probably wasn’t worth the effort. There wasn’t an absolute prohibition on their use, but the OEM was burdened with proving their safety. Obtaining that certification with connectors meant the OEM would have to submit to a lot of end-product testing. Its UL field representative would conduct a thorough safety investigation of the connector application, including the overall electrical transmission path. That added an uncertain amount of cost and time to getting a new machine to market. Most OEMs opted instead to take the path of least resistance — hardwiring all connections.

Now that deterrent has been removed. Due to the longtime partnership between Harting and UL, Harting requested a new status for connectors submitted by manufacturers that pass a UL test program set up for this purpose. Those connectors become eligible for use in UL 508 applications without further testing, providing the OEM uses them as prescribed by the standards. Shifting the testing burden to the connectivity manufacturer has provided the machine builder with two practical alternatives to hardwiring: either build its own field-assembled cabinet using these pre-tested connectors, or opt for a cable assembly produced by a manufacturer, according to UL requirements, using the same components.

Globally, UL 508 (508A and 508C) is not the only certification standard covering electrical control cabinet and switchgear safety, but the one most often used in North America. Substantially all industrial connectors are UL-certified for general use from the time they are introduced here, but that doesn’t pre-qualify them for use in UL 508 applications. In the UL universe, connectors have been relegated to historical electrical interface categories, such as ECBT2 that use UL 1977 as their base standard. However, components for UL 508 control cabinets had to come from product groups listed in UL 508 Appendix A, “Standards for Components,” which made no provision for connectors.

Now, connectors submitted by manufacturers that pass this UL testing are added to a newly created section PVVA2 of UL 2237, which was created at the request of Harting. That’s a complementary standard to UL 508 that governs multi-point connections of power cables in industrial machinery. These PVVA2 connectors bear the UL Recognized designation.

Utilizing UL Recognized connectors under PVVA2 of UL 2237 fast tracks UL 508 certification of the end-use equipment since their traceability and documentation already have been established. The machine builder and end-user can count on their performance and be confident of their safety. In field assembly, these connectors must be installed by trained technical professionals following special approval stipulations, called the Conditions of Acceptability (CoA). Such requirements may contain both technical and constructive design information. For example, the power distribution cables should be selected in accordance with the TC-ER declaration and the approved wire AWG cable cross-section choices. Protective devices (fuse types RK5, CC, J or T) must be used on the cable path. The connector’s short circuit current rating (SCCR)—the level at which UL tested them — must satisfy the requirements of the cabinet.

Each connector manufacturer can choose the SCCR at which to have its components tested by UL, from 5kA (the default rating) up.

UL Listed assemblies are covered by the PVVA section of UL 2237 and are identified by the manufacturer’s identification and catalogue number, model or other designation on the product or its packaging. In addition, they bear UL’s Recognized component mark. OEMs can use these connectors in pretty much any application, but there are always projects where a standard UL Listed cable assembly will do just fine and cost less. Each such assembly carries a UL certification mark, and may be employed virtually without restriction in a UL 508 application. They must be made by an approved manufacturer, have their own part number and be produced at a location specified in their UL file.

The primary benefits of these connector-based alternatives to hardwiring are cost- and time-savings, and reliability. Hardwiring only really competes economically with connectors when a cabinet is wired once. As soon as it is unwired and rewired a second time, which often happens at some point prior to customer acceptance, the cost advantage shifts decisively to connector-based wiring. A machine large or complex enough to have an external cabinet or cabinets often is assembled and tested at the plant, disassembled for shipping and then reassembled at the customer’s location. With hardwiring, that’s a significant additional labour cost, consisting of hundreds or even thousands of dollars. Connectors are plug and play. If connector-based wiring worked at the plant, it will almost certainly work in the field from the get-go.

This article was originally published in the November/December 2016 issue of Manufacturing AUTOMATION.