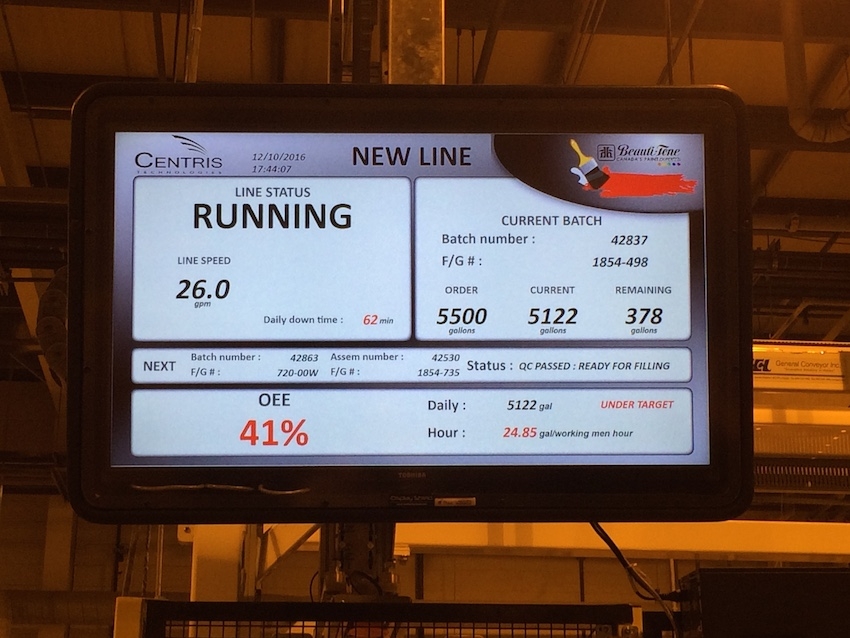 Mar. 25, 2017 – Home Hardware Stores Limited is one of Canada’s largest independent home improvement retailer with close to 1,100 independent small business operators from every corner of the country.

Competitive drive
Home Hardware stores, and specifically Beauti-Tone Paints, looks at things from a macro perspective — it’s all about competitiveness. It must compete with North American and global manufacturers who are 10, 50, and given up to 200, times its size. These much larger companies are its most direct competitors.

In order to track progress, the plant keeps a close eye on both production rates and yield. The objective is to maximize production per labour hour while maintaining high quality.

Streamlining communications so that the information is available more quickly to plant workers is a key factor in how PcVue’s HMI/SCADA helped the plant meet that objective. Eliminating the lag between the collection of data and the availability of that information to inform decision-making was the first step.

Plant manager, Russell Banks, understands the importance of data for managing production and has been the champion of increased data collection. When the plant started collecting more data, the team found that some assumptions they had from simply viewing the line were incorrect. They realized that their impressions were not very accurate as far as where the bottlenecks were and what was holding back production. Knowing where the true bottlenecks are has enabled the team to focus in the right place.

The SCADA system is providing the plant with both a real-time and comprehensive view of the filling line, which operates across multiple work centres. In the past, the focus of automation and data collection was on specific production equipment. The issue with this approach is that it gave the line workers a limited understanding of how the plant was performing as a whole.  Beauti-Tone Paint is now focused on finding the bottlenecks and opening up those pathways, as well as increasing the speed of communications to the plant floor. That way, personnel are spending less time looking for information and have a much better idea about what is ahead of them, in order to plan for it.

The system has also helped improve yield by eliminating some common problems in the handoff of work-in-process from one work centre to the next, which has helped the company improve quality. The system automatically updates the equipment for the order that is running rather than having the operator manually enter it.  Automation reduces errors in changeover, which happens multiple times a day in Beauti-Tone’s production schedule. Quality checks are also key elements of improved accuracy of the finished goods. For example, printing and scanning barcode labels to confirm the correct lot is at the work centre before starting to process it.

Fifteen years ago, Beauti-Tone invested in materials handling automation to better manage the batch process for bulk paint manufacturing. At that time, production automation for the filling line was not a priority. The plant has a very stable and experienced work force with the majority of employees having worked in the plant for 10 to 15 years. They made few obvious mistakes in the production process.

The lack of data made it difficult to measure plant performance. A few years ago, the company only looked at sales by month. Now it is more streamlined to allow time to look at sales every day. Previously, the plant tracked the average gallons produced per labour hour, but did so on an annual basis.

Adopting change
Implementation of the system was done by Centris Technologies of Varennes, Que. Centris has experience implementing paint manufacturing control systems and knows that no matter how good the system is, it will fail if there is not buy-in from the operators.

On one hand, some of the older workers at the plant were not really comfortable that the new technology would make their job more difficult.  On the other hand, even those who were comfortable with the technology understood that in order to learn the system, it would require extra work on their part.

To address these issues, Centris put a priority on the design of the human machine interface (HMI) in order to create a clean, simple, easy to understand layout. Soliciting feedback from the front line operators enabled a deeper understanding and buy-in from them. As an added benefit, familiarity with the purpose and layout of the interface makes training easier.

Centris also established a partnership program with a 24 hour/day hotline for the plant. Anyone, whether front line operator or management, was encouraged to call the hotline with questions or concerns. In new technology deployment, a common factor that turns users away from the system is frustration. It can be frustration from not understanding how the system is intended to be used. It can also arise when things don’t work as they are supposed to as the system is brought online. The hotline provides a means to address concerns quickly in order to eliminate these sources of frustration, which if not addressed will slow the adoption of the new system.

Michel Kakos, president of Centris Technologies, observed that companies that succeed at putting this kind of system in place do so because everyone on the various teams involved are speaking the same language. This is an iterative process of developing the system online, soliciting feedback from the users, and then tweaking the system until everyone is on the same page. The result is a platform for growth and expansion that can be rolled out to the other lines much more easily.

Measuring success
The first SCADA production system was deployed initially at the end of 2016 with an expectation to complete a second production line in 2017.

Beauti-Tone Paints is now producing twice the volume that it was achieving 15 years ago without an overall increase in the number of employees. With the increased speed of communication and volume of data collection coming from the new plant control system, Darrin Noble, vice president and general manager of Beauti-Tone Paints, said he expects significantly more improvements to come.

Success of the project is measured from an improvement in gallons per labour hour and also in other metrics such as corrective actions and rework. Most importantly, success for Home Hardware is achievement as the number 1 top-of-mind retail paint brand, building on its current position as the market share leader by volume in the Canadian DIY market.

Internally, success is measured by the extent to which the users feel the production system makes them better able to perform effectively. The company recognizes the success of the technology when the frontline assembly workers recommend expanding it to other lines and areas of the plant because it is helping them do a better job.

The SCADA solution is also intended as a platform for continuous improvement. Plans for enhancements include incorporating training documents and videos so that operators can easily reference standard work instructions. The fact that information moves quickly to all stakeholders is a major benefit to the plant.

PcVue’s particular HMI/SCADA system was chosen for the project because it is an independent solution and is not optimized for a specific hardware manufacturer or affiliated with a certain brand of PLC or controller. This makes it a good choice in a typical plant environment that has a mixture of hardware in use. In addition, the features of the platform reduced complexity and increased flexibility, which allows for efficiency and scalability for expansion plant-wide.

Ed Nugent is the COO of PcVue.