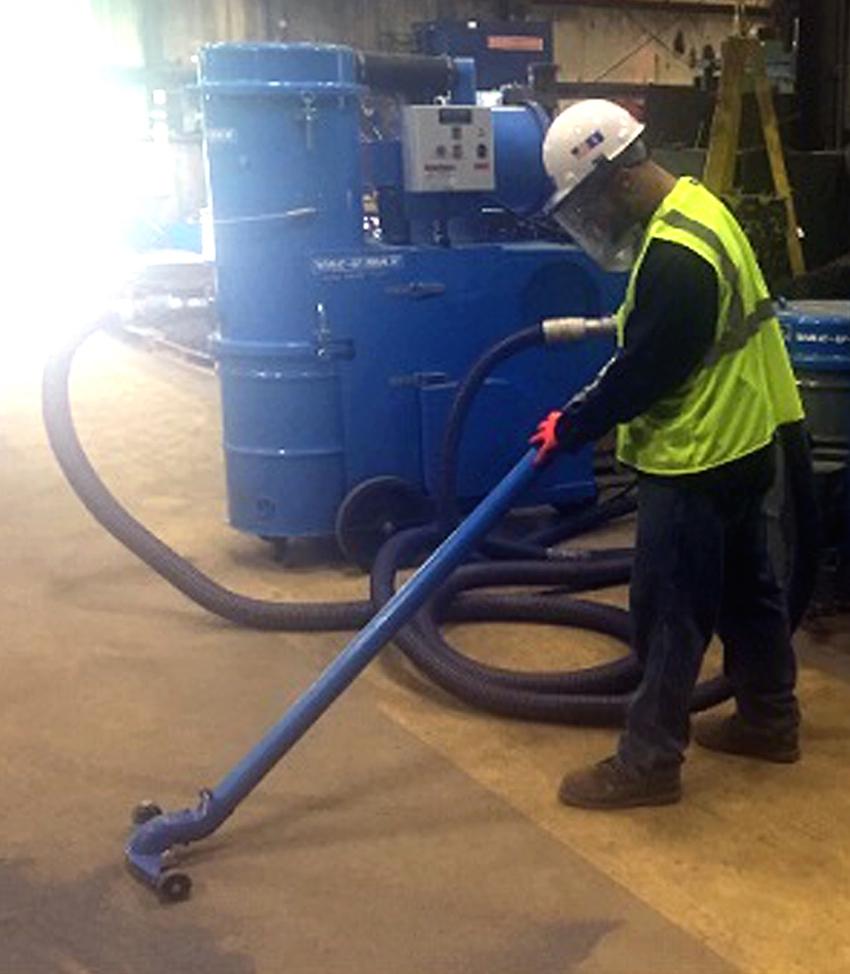 Thanks to the vacuum

Dec. 22, 2016 – Nearly every manager or supervisor in heavy industry has heard that safety is good for business. According to the OSHA document, Safety and Health Add Value, effective safety and health programs can mean the difference between organizations operating “in the black and running in the red.”

Eliminating manual material handling has some of the biggest potential to improve a company’s productivity, product quality, and overall business competitiveness.

Just as safety and health programs are unique to each operation, the ROI of effective ergonomic interventions is also unique to each organization. There are, however, key areas where potential savings regularly occur when implementing a heavy-duty vacuum. Beyond the elimination of ergonomic hazards and injury costs, savings can be found in increased uptime, reduced manpower, increased productivity, improved product quality and a healthier, cleaner environment.

When Cianbro wanted to eliminate an ergonomic hazard in which workers manually removed steel shot from an auger system connected to a cabinet-style blast machine at its 40,000-square-foot fabrication and coating facility in Georgetown, Mass., safety, health and environmental supervisor Kris Chipman researched methods to eliminate manual handling of the heavy material.

Cianbro operates in more than 40 states across a range of markets self-performing civil and structural projects from building bridges, to operating fabrication and coating facilities, and working in power plants and paper mills. 100 per cent employee-owned, Cianbro promises a total commitment to safety with a long list of safety awards including national recognition as the Healthiest and Safest Company in America by the American College of Occupation & Environmental Medicine.

The Georgetown facility fabricates structural steel beams for bridge and building projects. Many of these projects begin with beams moving, via a conveyor system, through the cabinet-style blast machine where steel beads (called shot) shoot at the beam to remove rust and mill scale in preparation for welding or painting. Once the steel shot hits the beam, it drops down into an auger system that reclaims and feeds the material back into the blast machine for reuse over and over again.

The sandblasting process is taxing on machinery, and when inherent breakdowns occur, workers must remove all blast media from the system to perform maintenance. On those occasions, two workers spent eight hours sweeping and shovelling the steel shot into drums and, using a drum dolly, manually moved them from the production floor.

Focused on safety, the goal was to alleviate the ergonomic issues of shovelling heavy media in a tight space and manually moving heavy drums. In researching for solutions, Chipman had seen some big shop-type vacs and thought something like that might work.

After speaking with the VAC-U-MAX rep, who had worked on another Cianbro project to vacuum sludge for a bridge application, it quickly became clear the commercial shop-type vacs were insufficient to handle the volume of heavy blast media, said Chipman. “He did understand exactly what we were looking for and after more discussion we realized this could actually save money on the machine, downtime, production and more.”

Belleville, New Jersey-based VAC-U-MAX, a player in the industrial vacuum cleaning and pneumatic conveying industries for more than 60 years, has application experience in the handling of more than 10,000 bulk materials including cast iron, steel, aluminum chips, sludge powders, flakes, granules, pellets and various others. The company manufactures industrial vacuum cleaners for manufacturing and municipal facilities as well as government installations and environmental sites in an effort to improve cleanliness, working conditions and safety.

To handle the heavy blast media, the vacuum needed to be designed for high volume recovery in an industrial setting, and the 15Hp 1020MFS continuous duty vacuum was the ideal solution to eliminate workers needing to go down into a three-foot-deep trench with limited space and awkward footing to shovel and scoop heavy blast media.

Even though the unit is capable of recovering up to five tonnes per hour and designed to pick up heavy materials including steel shot, foundry sand, metal powders, sludges and other materials similar in nature, Chipman wanted final assurance that the vacuum could pick up their particular blast media.

“This is heavy stuff,” said Chipman. “Each 55-gallon drum weighs approximately 2,000 pounds and from the beginning we weren’t sure if what we wanted to do was even possible. So we sent VAC-U-MAX a sample of the shot media, they did some testing, and guaranteed it would work for us.”

Although the 1020 unit is portable with 14-foot large rubber tires and a dual swivel castor wheel that makes it easily maneuverable by a single operator, Cianbro mounted its unit to a skid.

“Push-pull is a hazard in our book, and we do all that we can to avoid it,” said Chipman. “So we mounted it to a skid and we move it with equipment. It is very portable for us because we have the equipment on site — fork trucks and loaders — and we can move it around anywhere in our facility that we need it.”

As a result of this customer feedback, VAC-U-MAX now offers the Model 1020 with an optional forkliftable base.

“The great thing about this vacuum system is that the hoses are long enough that we can leave the collection drums where they can be mechanically moved, instead moving drum dollies manually,” said Chipman.

Since acquiring the vacuum, the facility has cut the labour required to empty the machine by more than 50 per cent. The task of emptying the pit, which used to take eight hours utilizing two workers, now takes one worker three hours.

“Now we can shut it down in the morning, vacuum it out and have it repaired all in the same day, using one person,” said Chipman. “The reduced labour on maintenance, which is something that can’t be billed, is now redistributed to work hours on a project that is billable.”

Shawn Ramsay, operations manager at the Georgetown facility, said that in addition to the vacuum, “reducing the risk of injuries and allowing us to quickly and safely clear the steel shot out from the machine pit to perform maintenance, it also proved to be very helpful in the daily maintenance and cleanliness of the areas around the machine.”

In an environment where the nature of a blasting machine is to, in effect, destroy itself over time, reducing the amount of wear and tear can increase the longevity of that equipment and reduce the amount of break downs and unscheduled down time. Because the vacuum makes light work of the heavy blast media, the facility now cleans around the blast cabinet and auger system a couple times a week, reducing abrasion to machine parts.

Before getting the vacuum, the machine used to break down about once each month where all blast media would needed removal for some type of unscheduled maintenance or repair.

After implementing the vacuum, “we’ve only had to clean the entire pit out twice in the last year for unscheduled maintenance, which is an 80 per cent reduction in unscheduled downtime and increased production time,” said Chipman. “Of course, being the safety person, it is a lot safer having someone there holding a vacuum than it is to be shovelling heavy media into a drum.”

In addition, to using the vacuum for its original task of cleaning steel shot from the blast machine and auger, Ramsay said the facility has expanded the use of the vacuum in other areas, such as cleaning garnet from the floor of another blasting area and also in the paint bay. “It has allowed us to clean the areas in a much safer and expeditious manner,” he said.

The facility also uses the vacuum to clean up overspray in its coating operation as well as for general housekeeping on the shop floor.

“When we do a good clean up we utilize the vacuum and it is a lot faster and more efficient than just sweeping. And it gets it cleaner,” said Chipman. “This product is an investment but when you look at the potential for injury and on top of that potential, show hard numbers that we know this will limit downtime — which has a cost — and also reduce replacement parts and wear and tear while increasing the longevity of the equipment, it makes it easy to put the case together to make the investment.”