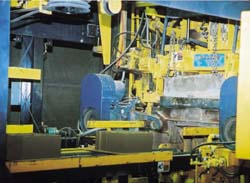 Out of Permacon‘s Stittsville, Ont., location, the company operates one Besser V312 Block Machine capable of completing 4,000 block production cycles per day. The site currently has 17 employees, five of which recently celebrated their joint status of all having over 25 years of service with the firm, and their safety is paramount.

So when, as a result of a 2008 safety ruling, the Ontario Ministry of Labour was on site for an accident investigation and it became apparent that the block machine and related equipment used for production did not meet current safety standards, management rapidly took action to identify and rectify these safety issues. Newmarket Ont.-based Reflex Integration was then brought in as a result of a professional engineer’s review to assist with this process.

Specific deficiencies were identified with the guarding for the automated door by the block machine (CSA Z432-04), safety interlocks, and most importantly, the control system for the machine’s operation was not dual-channel control-reliable as required by the CSA Z142-09 power press safety standard.

The Z142 safety standard is likely something most in the block production industry have never even heard of until now, but all are well advised to learn more about it and ensure that your operations comply. It was developed initially for the metal stamping industry but is applicable to any operation such as block machines based on their method of operation that forms, shears or blanks any material.

So what is Z142?
Straight from the document, “The objective of this standard is to reduce the risk of injury due to hazards from the operation, maintenance and set-up, while working on, or adjacent to, a power press.” Some of the specific requirements applicable in this case are that press production equipment requires “press control reliability and redundancy, new training requirements and press type specific training.”

In this case, the solution was to provide a Command Stamp Press control unit to the Permacon maintenance and electrical staff who then installed it themselves as part of the overall safety upgrades required on site to bring the equipment into compliance with the Z142 Press Requirement and the Z432-04 Machine Guarding standards.

So why is this important to block and paver production operations? Well, if an accident were ever to occur with the equipment, not only could the company be subject to significant provincial fines should the investigation reveal any of the above safety deficiencies, but could also now even face heftier fines and criminal charges under federal Bill C-45. In fact in February 2008 the first conviction under Bill C-45 was a paving stone manufacturer in Quebec who plead guilty and was fined $110,000 including the 10-percent victim surcharge, highlighting the need for this industry to address these safety issues. In this case, had the system met the Z142 control monitoring requirements described above, the fatality would have been avoided because the equipment would not have run with the light curtains disabled, as was the case in this instance. This conviction also noted clearly the deficiency in operator training as the worker likely didn’t even realize the danger he was in.

Bill C-45 is an Act to amend the Criminal Code, (Criminal Liability of Organizations) which came into effect March 31, 2004, and contains numerous provisions directly related to workplace and public safety. Among others, this bill includes the following provisions: imposition of legal duties on employers and those who direct work to take reasonable measures to protect employee and public safety; if this duty is carelessly disregarded and bodily harm or death results, an organization could be charged with criminal negligence.

Most importantly, “every one who undertakes, or has the authority, to direct how another person does work or performs a task is under a legal duty to take reasonable steps to prevent bodily harm to that person, or any other person, arising from that work or task.” The fine for a “summary conviction” has been increased from $25,000 to $100,000. There is no ceiling for fines on indictable or more serious offences.

There are only a handful of major producers of block machines in the marketplace, and none of these currently meet the Z142 standard as manufactured unless a company made specific remedial modifications and added reliable and redundant safety controls.

What can you do to remedy these safety deficiencies?
First off, as you likely work with a professional engineer for guidance and support with your production equipment, ask him directly if he’s verified that your equipment meets the Z142 safety requirement.

Secondly, have a company skilled and experienced in these safety modifications come in to inspect your equipment to advise on the status of your safety guarding and controls against the engineer’s recommendation for compliance to Z142.

And thirdly, if you don’t have in place now an operator training, verification and recordkeeping program, develop and implement one as soon as possible in order to ensure you’re in compliance as you will need to produce these records for Ministry officials should an accident ever occur.

It is important to keep up with the changes in safety codes and regulations that are applicable to your production equipment in order to protect not only your operations but also your management, the business itself — and most importantly — the safety of your employees.

Jeff Ashcroft is a frequent commentator on safety issues in power press operations with Reflex Integration a supplier of power press safety upgrades and manufacturer of the Command Stamp, a CSA Z142-compliant press control. If you have questions on these safety issues or require further information or assistance, he can be reached directly at (905) 836-8103, jeff@reflexintegration.com, www.reflexintegration.com or Twitter @reflex_.