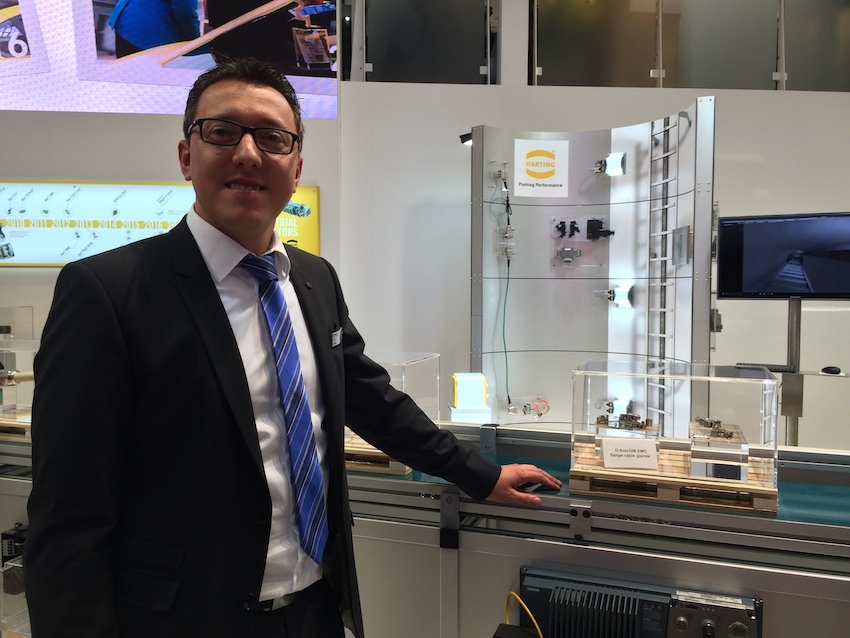 The lead theme of Integrated Industry – Creating Value put a spotlight on the benefits of Industry 4.0 and the role of humans in tomorrow’s integrated factories. It is clear that robotics continue to be a driving force behind the advancement of automation technology in manufacturing.

The next era of robotics
It seemed like the new generation of robots was everywhere at this year’s event, driving home the fact that robotics—both traditional and collaborative — will continue to transform manufacturing operations by communicating with humans and other machines through connectivity, artificial intelligence (AI) and sensors.

“The key element we’ve shown in the past is sensitivity [and] we want to be able to have these safe, sensitive robots that are outside of their cages so that means we can interact with them and have them be more present in our lives,” said David Fuller, chief technology officer at Kuka Roboter GmbH, at an exclusive media press conference.

One innovation highlighted at the Kuka booth was Kuka Connect, a Cloud-based software platform that allows users to connect with their robots from anywhere at any time. “It seems kind of basic with all this talk of Industry 4.0, but this is fundamentally how we start the vertical and horizontal integration of new platforms and new capability. From this, you can gain better efficiency and uptime [because you know] when to service your robot, and can better manage and commission it, and in the end, deliver better cycle time and overall throughput,” Fuller said, describing Kuka Connect as the very beginning of a platform that will eventually grow to include production optimization, condition monitoring and predictive maintenance applications, among others.

“One of the things that we’re more optimistic about…is that if you have a safe robot — that can be out of the fence — the barrier to its usage is the cost to implement the specific solution. With deep learning and AI, we believe over time, you just simply train your robot to follow what you’re doing and it can learn the process and thus have robots do more things. And this is really the heart, the promise of AI,” noted Fuller.

“These robots can learn from one another, but it’s still humans telling them what to do. In other words, they are universally deployable intelligent tools designed for use by factory workers,” said Dr. Jochen Köckler, member of the managing board at Deutsche Messe, noting that collaborative robots will become increasingly attuned to and be able to support humans in their work. “There was huge interest in the displays in the robotics halls. Not only are cobots an exciting prospect for large companies — many SMEs were also at Hannover Messe to find out about these new helpers.”

Multimarket commitment
Beckhoff Automation is just one of the dozens of companies that debuted new product innovations at Hannover Messe 2017. The company introduced several new products designed for process technology applications at Hannover Messe, including the CPX series control panels for use in hazardous areas and the ELX series EtherCAT terminals, announcing a stronger commitment to the oil and gas, process-oriented industries. This closely follows the release of what the company describes as the world’s smallest Industrial PC, the C6015. Introduced earlier this year, the IPC measures 82 x 82 x 40 mm and features a quad-core CPU for compact and powerful control solutions.

At a press conference, managing director Hans Beckhoff noted that the company generated global sales of 679 million euros in 2016 — a 9.5 per cent increase over the previous year — crediting much of the success to new product development, broad market penetration and improved distribution network coverage.

“We really feel that with our offering today in that space, [it is] almost to the point where we can connect to any kind of network that’s existing. We can go into a process facility and have our tools, not just from a hardware offering standpoint but also from the communications standards, that we are now able to work with and from a software standpoint,” said Aurelio Banda, Beckhoff Automation North America CEO. “Having the FDT, DTM type interface gives us the ability to come right into an existing environment and get applied, and moreover, get learning so that way in the future, it’s a new type of installment. It gives us the ability to embark with new customers, to give them the lead affect that they need to have for their specific designs.”

Top honours
The jury selected fleXstructures GmbH of Kaiserlautern, Germany, as the winner of this year’s Robotics Award for its IPS robot optimization software. The award recognizes technological innovations that make a contribution towards robot-assisted solutions in the field of industrial automation or towards the development of mobile robots and autonomous systems.

Meanwhile, the Hermes Award went to German company Schunk GmbH & Co. KG. for its self-learning gripping system, which it says is ideally suited for Industry 4.0 manufacturing environments where humans and robots will collaborate closely. An intelligent modular gripping system for human-robot collaboration, the JL1 co-act gripper is capable of interacting and communicating with its human operator, and it features sensor systems that create a safety “bubble” by tracking the proximity of humans to avoid direct human-machine contact.

An international affair
As this year’s official Partner Country, Poland sent a total of 200 companies to Hannover, with research and startups a special priority for the country, as noted by Polish Prime Minister Beata Szydlo in her address at the opening ceremony. Show organizers said the largest number of foreign visitors came from China (9,000), followed by the Netherlands (6,200), India (5,300) and Poland, whose 5,000 visitors set a new Partner Country record.

Visit bit.ly/2qtMgPJ to see our photo highlights, and save the date for Hannover Messe 2018, which runs April 23 to 27 with Mexico as the Partner Country.

This article was originally published in the June 2017 issue of Manufacturing AUTOMATION.