It was business as usual when Windsor, Ont.-based Tri-Way Manufacturing Technologies Corporation received an order from an automotive parts supplier. The order was to build an eight-station dial table machine, which would produce left and right aluminum rocker covers for General Motors. 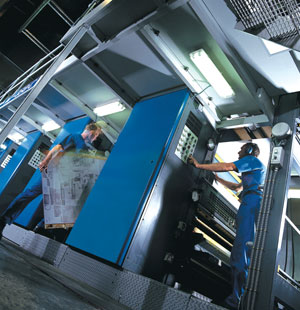 The customer provided Tri-Way, one of North America’s largest manufacturers of metal-cutting machinery used to produce auto parts, with a list of approved components for the work order as outlined by General Motors. But there was a challenge: the list included a design platform with which

Tri-Way engineers had no experience. The design platform was the Allen-Bradley ControlLogix controller and remote I/O communications network from Rockwell Automation.

Tri-Way contacted its Allen-Bradley distributor, Dave Dumouchelle of Electrozad Supply in Windsor, to help implement the ControlLogix platform and meet the detailed part specifications. After reviewing the specifications, Dumouchelle suggested that newer technologies, such as the ControlNet network, PowerFlex 700 AC drives and a Microsoft Windows-based user interface, would provide Tri-Way’s customer with more advanced controls and meet the customer’s needs more effectively.

The automotive parts supplier granted Tri-Way engineers approval to deviate from the original specifications and use the ControlNet network in addition to remote I/O. By running the discrete I/O and HMI on ControlNet, Tri-Way engineers achieved faster data transfer and response, says Weldon.

In less than two weeks, Tri-Way’s new control system was fully integrated and operational. According to Weldon, it normally takes at least a month, if not longer, to get a new control system fully implemented, and in most cases, there are still lingering issues.

“The ease of integration and flexible connectivity of the ControlLogix platform allowed us to use four different communication networks in one machine-a task we’d never attempted before,” says Weldon.

The new dial table machine includes an Ethernet module, a SERCOS interface motion module, ControlNet and remote I/O. The machine also uses two ControlLogix processors: one processor is for motion; and the other is for all remaining functionality, including a robot for loading the machine and a robot for unloading it. The dial table machine produces two rocker covers every nine seconds-a cycle time that is twice as fast as the industry standard, Weldon says. For Tri-Way’s customer, this cycle time represents a 50-percent savings in machine expenditures, a 50-percent increase in production and a 40-percent decrease in required floor space.

The multi-disciplined motion/PLC development tools within the ControlLogix programming software allows Tri-Way engineers to reuse their resources and reduce software engineering and integration time by between 400 hours and 600 hours for future projects. This saves the company money and reduces risks, since engineers already know how the machines will perform, Weldon says. The tag-based programming environment for ControlLogix allows Tri-Way programmers to write code independent of electrical connection assignments.

Mike Miclot is manager of the ControlLogix Business at Rockwell Automation. E-mail him at mdmiclot@ra.rockwell.com.
Print this page