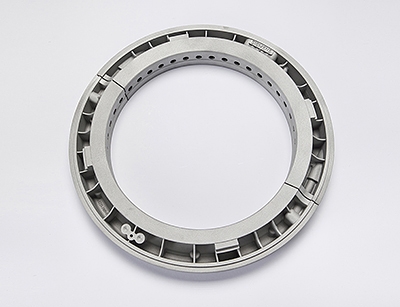 Apr. 10, 2018 – Siemens says it has reached an additive manufacturing (AM) milestone in the power generation industry with its first replacement parts 3D-printed from metal for an industrial steam turbine.

Last year, Siemens finished its first full-load engine tests for gas turbine blades completely produced using AM technology. Now after years of research, development and testing, the company has extended its use of AM in energy applications by producing a steam turbine replacement part with AM, reducing lead time by as much as 40 per cent, it says.

The 3D-printed parts are two oil sealing rings used in keeping oil separated from steam inside the steam turbine using pressurized air. The rings are being installed as replacement parts on the SST-300 industrial steam turbine operating at the JSW Steel Ltd. plant in Salem, India.

Siemens engineered, designed and developed the parts as part of a collaborative project between Siemens experts in Germany and India, as well as in Sweden, where the company operates a primary additive manufacturing centre.

Siemens describes AM as a process that builds parts layer by layer from sliced CAD models to form solid objects, enabling highly precise solutions to be formed from powdered high-performance materials.