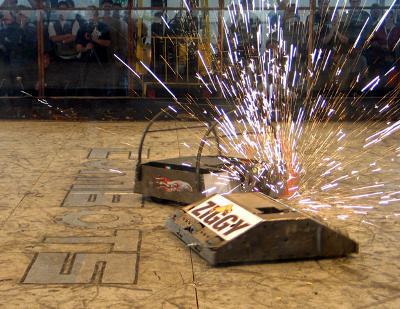 The 6th annual RoboGames were held last weekend in San Francisco, and for the fourth year in a row, Canada’s own Ziggy–one of the robotic combatants in the super-heavyweight division for ‘bots weighing 340 pounds–took home the gold.
“No matter what your favourite robot sport is, the best bots in the world come to San Francisco every June,” the organization says of the 400 non-sentient athletes competing in all events.””The stands are filled with people watching 340 pound robots shoot flames and smash into each other and androids cart-wheeling down the soccer field.”
Ziggy battled it out in one of the most competitive combat categories. (View all RoboGames winners.) In its battle history, Ziggy had been proven capable of lobbing similarly heavy, 300-plus-pound opponents three metres with its “megaflipper.” Last week, the Canadian bionic brute further proved its might against U.S.-made Juggernaut by tossing it around like an empty pop can–and promptly made a mockery of its name. The audience groaned and cheered with each slam and metallic crunch.
This year,”Ziggy was sporting a newly improved pneumatic flipper weapon (managed by electronics from”Nuvation, which provides project-based chip, board and software design services for the embedded systems industry). This results in unwanted (but totally cool) free-flying lessons for its opponents. As well, Ziggy’s external armor and “megaflipper” assembly are built from military-grade titanium, and at full power, the flipper can launch an opponent to the arena ceiling.
Ziggy’s Ottawa-based creator, Mark Demers, who works at high-performance tunable laser manufacturer Santur Corp., has excelled in his sales and marketing career and has in turn made a name for himself and”CM Robotics“with his RoboGames champ. 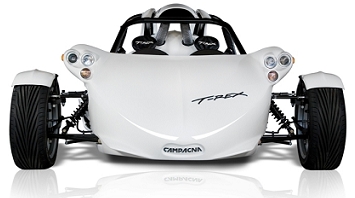 He also leads a team of designers at Ottawa-based”OptaMotive“that says they will bring a pure battery electric vehicle to compete in the Progressive Insurance Automotive X PRIZE alternative class. OptaMotive is bolstered by members who have experience in robotics, autonomous control, vehicle design, race engineering, control systems and battery engineering.
So overall, the event saw 620 engineers from 18 countries compete in 51 events, putting their”army of remote-controlled and autonomous combat robots–along with walking humanoids, soccer ‘bots, sumo ‘bots and even androids that do kung-fu–to the test.
Print this page