When robots first came on the manufacturing scene in the late 1950s and early 1960s, skeptics accused them of stealing jobs and dehumanizing the workplace. Others thought robots could solve the industrial world’s woes. Today’s truth: We’ve only just begun to realize the robot’s true potential.

Contrary to popular fictional images of robots as human-looking machines able to perform almost any task, most robotic systems are anchored to fixed positions in factories where they perform a flexible but restricted number of operations in computer-aided manufacturing. Manufacturers are now using robots to trim and assemble everything from jet skis to juice jugs, from headliners to hot tubs.

But despite all that it offers to manufacturers, the robot is still held back by its “master.” The programming of the machine itself is time-consuming and labour-intensive, requiring multiple setups and extensive teach-time for most industrial applications. While robots have saved production time and cut labour costs, they still require a substantial amount of labour and time to teach.

But that is about to change.

In Burlington, Ont., Flow Applications Group (a division of Flow International) is forging new ground with offline programming for six-axis robots. Using new Robotmaster software, the company is aiming to cut production time by 50 per cent and improve the efficiency of its robots.

“We’ve built systems with four robots working on one part,” says Snider. “The pain point is when you have to stop production of work cells, using four employees to re-program four robots, or one employee to juggle four robots. This is high production capital equipment that should be up and running, making money for the company.”

Before it could proceed to the marketplace with its new shape cutting systems, Flow Applications Group needed a solution for its robot downtime. With offline programming, Snider says his operators can start a new program in literally seconds. By changing the tools or fixtures (if required) and downloading a pre-set program from the main computer system, operators and machines can remain in production. 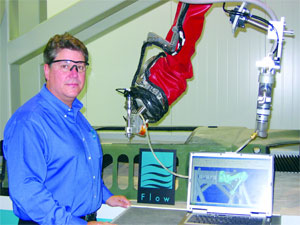 Path-sensitive programming
Robotmaster has a trajectory path-rich environment, which gives all of the necessary information to the machine, allowing the robot to make quick changes in motion. Unlike standard teach-based robotic software, which can be cumbersome to program and adapt, this CADCAM-based programming software allows the operator to modify the trajectory based on the path the robot needs to follow.

For Flow Application Group, what may have taken half a day to program in the past can now take as little as 15 minutes with minimal touch up time at the robot cell.

Overcoming accuracy limitations
The key to the success of an offline robot program is convincing manufacturers of the program’s accuracy. For products whose quality standards rely on precision within the thousandths of an inch, the dynamic accuracy simply hasn’t been there to date with six-axis robots.

Offline programming now opens the door to high-precision manufacturing. With the ability to track the robot’s path and motion, manufacturers can enhance accuracy.

“This approach gives the house painter the ability to paint like an artist,” says Snider.

Offline programming also offers versatility, allowing CNC machines and other automated tools to go where they have never gone before. In beta testing, Robotmaster proved itself useful in multiple applications, including welding, trimming, dispensing and routing.

“We’re seeing an explosion of flexibility here,” says Snider. “We’ll have one robot doing the material handling, interfaced with another doing the cutting and finishing, sharing a series of pre-programmed co-ordinated movements. We can go from raw material to processing with a smooth, fluid exchange from the offline computer to the online robot work cells.”