With automation changing the types of manufacturing jobs available in Canada, leaders look for ways to attract new workers and re-engage existing ones 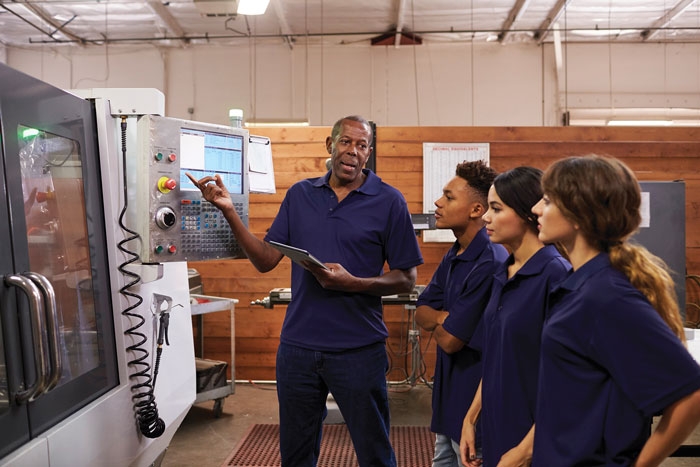 July 23, 2019 – It’s been three months since the grand opening of the Barrett Centre for Technology Innovation (Barrett CTI), a 93,000 square foot facility – but the excitement is still palpable in Darren Lawless’ voice.

As the dean of applied research and innovation at Toronto’s Humber College, Lawless spent years working on the building – from securing funding (including $15.5 million from the Canadian government, and $10 million from the Barrett Family Foundation), to lining up industry partners (Cisco Systems Canada, KUKA Robotics Canada and Rockwell Automation are just a few.)

Then, in April 2019, his dreams were realized when the doors to the $45.6 million “factory of the future” opened. Located on Humber’s north campus, Barrett CTI isn’t just designed for students – it’s also a customizable training facility for companies gearing up for Industry 4.0, with a focus on robotics, automation and systems integration.

In the KUKA Advanced Automation Lab, students can test out the latest software and robotics technology. The SEW-EURODRIVE Innovation Lab showcases advanced manufacturing that uses the latest augmented reality devices to assemble products with step-by-step instructions. SICK sensors are used throughout most of the facility’s applications, and in the Festo smart factory room, the focus is on the Internet of Things and flexible manufacturing.

“There’s a feeling that this could be part of the solution, rather than just a ‘same-old, same-old’ type building,” says Lawless.

The “solution” he’s referring to is for a problem that’s been brewing in Canada’s manufacturing sector for the last 20 years. Perhaps counter-intuitively, job loss has been compounded by extreme labour shortages, with vacancies for skilled positions numbering in the tens of thousands. The culprit, say some, is automation changing the nature of jobs. However, an aging workforce is also to blame, with one in five manufacturing employees in Canada currently eyeing retirement.

Whatever the cause, Barrett CTI’s purpose isn’t just about raising Humber’s profile with shiny new technology – at its root, it’s about improving Canada’s competitive edge and attracting investment. The alternative, says Lawless, is the collapse of an industry that employs 1.7 million Canadians.

“Despite the thoughts of protectionism, we’re in a global marketplace. If we’re not filling the skills gap, it’s really simple – companies will go where the talent is.” says Lawless. “It’s not doomsday; it’s not a prophecy. It’s just reality.”

The push for upskilling
In 2016, when the Brookfield Institute released its latest report, “The Talented Mr. Robot,” alarm bells sounded. A whopping 42 per cent of jobs in Canada, it reported, were susceptible to automation, particularly in manufacturing. In Ontario alone, this equated to more than 370,000 jobs. The future was finally here, and we were all about to be replaced by robots.

“It got misinterpreted. It’s more nuanced than that,” says Sarah Doyle, Brookfield’s director of policy and research. “Automation doesn’t mean a job is going to disappear. However, it may require some new skills.”

There’s already evidence of the consequences of failing to modernize. Between 2009 and 2014, industrialized countries around the world expanded investments in robotics, automated systems and advanced technologies, resulting in productivity increases ranging from 30 to 98 per cent. In contrast, Canadian manufacturers reduced their investments in technology by nearly five per cent, triggering a drop in productivity growth. There was also job loss; between 2001
and 2011, Ontario had a 5.5 per cent drop in employment. Yet, Germany – where automation was adopted at higher rates – only saw a drop of four per cent. Low technology adoption, reported the Brookfield Institute, “may have undermined Ontario firms’ competitiveness and put more workers at risk.”

Adopting new technology, though, means training a workforce to use it. The problem, says Doyle, is that it’s still not entirely clear how to best train new and existing employees, particularly when we’re still not entirely sure what “jobs of the future” will look like – and when it can feel like change is coming at a breakneck speed. One thing is clear though: The traditional post-secondary model isn’t working.

“If you talk to universities or colleges, they’ll tell you that employers aren’t able to give them the information they need. If you talk to employers, they’ll say the colleges aren’t giving them the skills they need,” says Doyle.

Doyle, like many others, believes the answer may be in developing upskilling programs for existing workers, through the use of training modules that don’t require multi-year degrees. Some of these are already in existence, with organizations such as TOOLING U-SME offering online training modules that can be adapted to each worker’s needs.

Others believe that apprenticeship programs and on-the-job training are the solution. When I ask Jayson Myers, the CEO of Next Generation Manufacturing Canada, for examples of strong apprenticeship programs in Canada, he doesn’t even take a breath before rattling off a long list: Linamar has work-integrated learning programs, Siemens has its own training academy, Rockwell works directly with students. However, he notes that these companies all have one thing in common: ample resources.

“If you’re a small manufacturing company, you probably don’t have the expertise to do a training program in-house, and you don’t have time to take your employees off the production line to send them to school,” says Myers.

Rebranding an industry
That’s why reskilling is just one part of the puzzle. Sree Ramaswamy, a partner at the McKinsey Global Institute (MGI) who studies the economics of multinational corporations, believes that while it’s possible to retrain workers for specialized skills (such the ability to work with a particular model of CNC machine), the real challenge is finding employees with strong foundational skills in basic programming, digital literacy and critical thinking skills. Or, as he puts it, employees who have the ability to understand “mountains of data.”

“Firms are relying on public systems to develop those foundational skills. But if a worker or engineer has those sorts of skills, there’s a strong diversion rate into non-manufacturing occupations or industries,” says Ramaswamy. “Only 40 or 50 per cent of STEM degree holders actually work in STEM-related occupations.”

Ultimately, the skills gap can’t be solely blamed on a lack of sufficient training or upskilling programs. More than anything, it’s a PR problem. For years, high school graduates have been pushed into STEM programs, all so that they can avoid ending up in factory jobs. Yet automation has the power to change this stigma. Today, a career in manufacturing means that those with skills in engineering, programming and technology are sought-after – and compensated accordingly.

Lawless understands this all too well. How do we get recent graduates interested in careers in manufacturing? How can we rebrand an entire industry?

“It’s great that we can retrain people, but if we can’t get people excited in the automation processes, then the pipeline will dry out and we won’t have the people with the necessary skills,” says Lawless. “We want the talent to be developed here and that means changing the way we do things.”
_____