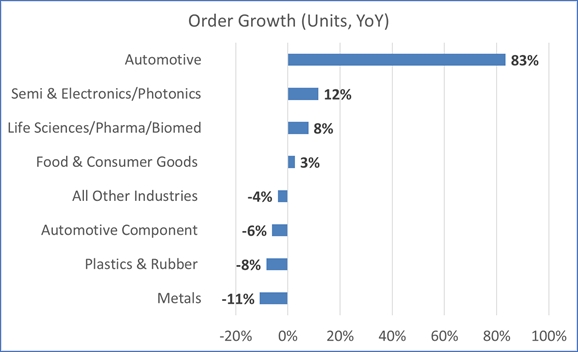 August 21, 2019 – The North American robotics market is up 7.2 per cent in the first half of 2019, according to a new report released by the Robotic Industries Association (RIA), part of the Association for Advancing Automation.

From January to June, North American companies ordered a total of 16,488 robots, valued at $869 million.

The largest driver of the year-to-date growth was an 83 per cent increase in units ordered by automotive OEMs. Other industries that saw increases include semiconductor and electronics (12 per cent), life sciences (eight per cent), and food and consumer goods (three per cent).

In the second quarter alone, North American companies ordered 8,572 robots, valued at $446 million. This represents a growth of 19.2 per cent in number of robots ordered, and a 0.6 per cent boost in dollars compared to the same time period in 2018.

“Robot use continues to grow, which is helping make U.S. companies more competitive and leading to new job growth,” says Jeff Burnstein, president of the Association for Advancing Automation, in a release. “We are currently experiencing the greatest period of robot expansion in history – over 180,000 robots have been shipped to American companies since 2010, and more than 1.2 million new manufacturing jobs have been created during this time.”

The Association for Advancing Automation is the global advocate for the benefits of automating. A3 is the umbrella group for Robotic Industries Association (RIA), AIA – Advancing Vision + Imaging, Motion Control & Motor Association (MCMA) and A3 Mexico. RIA, AIA, MCMA and A3 Mexico combined represent over 1,200 automation manufacturers, component suppliers, system integrators, end users, research groups and consulting firms from throughout the world.