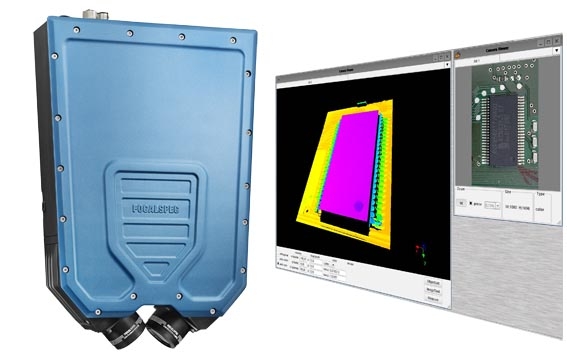 September 12, 2019 – EVT has has added the FocalSpec sensor to work with its EyeVision software to inspect the pins of surface-mount device (SMD) component parts.

Despite having been checked several times during production, there still can be some errors on SMD parts.

Pins can be bent from the handling or the assembly. This means that the pin has no contact with the soldering paste. But because the pin is bent up, the 2D camera does most often not suffice to detect the error.

The SMD components have reflective parts, making traditional image capture – with e.g. a laser triangulation sensor – suboptimal. Due to the reflective surface of the metal reed on SMDs, it is difficult to determine their height. Also the tin-lead solder is reflective due to its silver shine.

With the FocalSpec, a perfect image of the pin height can be captured. Therefore it can be inspected, if all pins on the PCB board have the same height, which means that they have electrical contact. The soldering paste is clearly visible in the scan and can also be inspected.

With the addition of the FocalSpec sensor, the ChipControl command set of the EyeVision software has been enhanced with the correct image capture element.