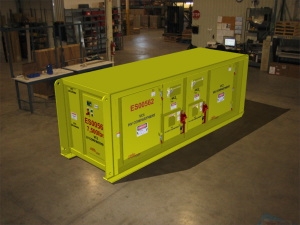 The Company: Since its founding in 1983, Benshaw, a division of Curtiss Wright Flow Control Company, has grown to become a world leader in the design, development and manufacture of mission critical motor controls and drives. Benshaw’s Canadian headquarters, located in Listowel, Ont., house a state-of-the-art low/medium-voltage motor control manufacturing facility that serves customers in Canada and beyond. The company’s dedication to making the best solid state starters for critical applications in harsh environments – along with its commitment to superior customer service – has allowed Benshaw to achieve a leadership position in the markets it serves.

Benshaw was looking to decrease its time to market to further differentiate themselves from its competitors. By using Autodesk’s software solutions for digital prototyping, Benshaw was able to:

• Save costs and bring their custom products to market much faster.

The Challenge: Benshaw was recently challenged to design two mine skids that could withstand extremely harsh conditions in order to house and deliver sensitive electrical components – in this case, soft starters – through a Saskatchewan potash mine. Soft starters are used with AC electric motors to reduce the load and torque in a motor during startup to reduce mechanical stress.

Each skid would need to withstand the wear, tear and vibration that occurs as each is lowered by a crane approximately one kilometre down a three-metre-wide mine shaft, and then literally dragged for 15 kilometres through the mine.

“We had extremely tight requirements to follow when designing the skids,” said Tyler Martin, engineering technologist/drafting supervisor, Benshaw Canada. “While almost everything we do is custom, we normally just have to ensure our equipment fits through a standard door – so this request really pushed us into using Autodesk Inventor to its full capabilities.”

The Strategy: By using Autodesk Inventor, Benshaw was able to design the entire mine skid in 3D, and allow for crucial considerations such as height and weight, and even the type of steel used.

“Physically building a mine skid prototype would have been incredibly heavy and expensive,” says Martin. “Using Autodesk Inventor allowed us to build the mine skids right away with no stress tests required. Plus, it was so much easier to move, shrink and expand compared with a typical 2D model.”

The program also allowed for unprecedented versatility, and was able to flag any issues to the draftsperson as the skid was designed.

“Outside sales customers would be in a meeting talking about the mine skid – for example, asking us to make it smaller – and as they were saying that, we could be re-shaping it in the Autodesk program,” says Martin.

The Results: In the past, Benshaw physically built all of its models, but now uses digital prototyping across its designs using Autodesk Inventor software.

“The efficiency of our drafting and engineering has shot up, and that’s helped tremendously with new business,” says Martin. “When we’re quoting large jobs, Autodesk Inventor allows us to take our drawings and offer a visual aid when we’re quoting.”

When designing a panel or electrical enclosure, Autodesk Inventor also allows the Benshaw team to send 3D design files directly to outside manufacturers who also have the program.

“This decreases the time we spend detailing and calling out measurements to almost zero, increases efficiency at our manufacturers, and eliminates steps that can cause errors,” says Martin.

This case study ran as part of the 2011 Software Case Study Guide in the September 2011 issue of Manufacturing AUTOMATION.

Related
Autodesk cloud-based alternative to PLM now available
Execs less interested in SaaS than other ERP: study
The journey into kaizen
What is the definition of ERP in today’s world?