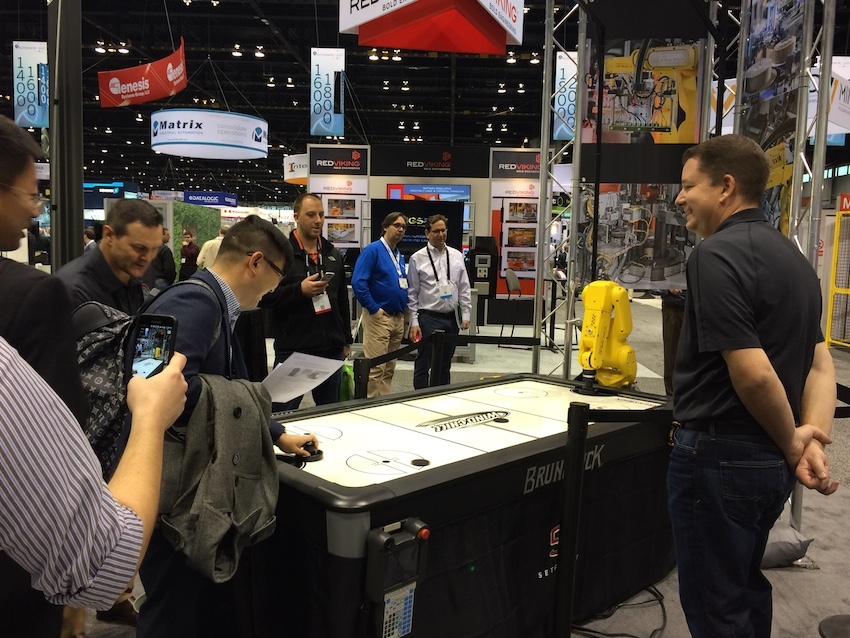 May 5, 2017 – Automate, the lively biennial tradeshow and conference, has concluded its 2017 edition, boasting record show attendance of 12,960 attendees — a 37 per cent increase over 2015, show organizers say.

The show, held April 3-6 in Chicago, is organized by the Association for Advancing Automation (A3) and its trade associations, the Robotic Industries Association (RIA), Advancing Vision Imaging (AIA), and the Motion Control & Motor Association (MCMA).

Couldn’t make it to the event? Check out our photo gallery here!

Implementing robotics into your operations
The ease of interaction with today’s robots was a common theme on the tradeshow floor. At the Kawasaki Robotics booth, attendees were served a refreshing ice-cream cone by the duAro dual-arm cobot, while those with a competitive spirit could battle it out against a robot in an air hockey match at the Setpoint Systems booth. Other exhibitors highlighted the agility and safety features of their cobot, by touching or grabbing it to demonstrate how quickly they can stop when human interference is sensed.

The first step to implementing robotics, many robot makers said, is to determine the specific application use. There are several fundamental differences between traditional and collaborative robots which can ultimately affect the average implementation cost, noted Douglas Peterson, general manager of the Americas at Universal Robots. Traditional robots, in general, are fixed assets and are more suited for high volume, low mix production environments and can require a lot of caging, guarding and safety requirements as compared to collaborative robots, which are typically flexible, lightweight, “easy to deploy, and easy to move around,” he said.

“Most cobots…can be plugged 110W AC so you don’t have all that power infrastructure. Yes, you’ll need a little bit of tooling, integration, vision and so forth but in general, a collaborative robot application can be a fourth to a third of the total cost [of a traditional robot installation]. This can be helpful for getting started with robotics when you are a small- or medium-sized enterprise which [do not] always have large capital investment budgets.”

Peterson pointed out that new robots should be thought of as an extension of the workforce, not just another asset to be acquired, and must be introduced into the operation the same way new employees are. “Cobots can help you with [a] labour shortage; they can help fill those positions where you may be having trouble finding employees and that moves current employees into more high-value tasks,” he said. “We think of the cobot as a tool in your toolbox. A lot of our customers take a robot and deploy it in one application, and because they’ve got it on wheels, they cart it over to another machine and now they are tending a different machine for the rest of the shift. They are using the robot as a tool — they are programming it and re-programming it and finding new applications every day for the robot.”

As the speed of manufacturing continues to increase, the design process for these components must also be accelerated while meeting strict demands regarding die-making and tooling accuracy and precision, stressed the company.

I had the opportunity to check out the tool myself and it was quite the experience. The VR world was so immersive the second I slipped on the goggles, I almost forgot I was in a buzzing conference hall for a bit!

New players enter the marketplace
Two of this year’s exhibitors who officially entered the North American market by way of the tradeshow are On Robot and OptoForce. Based in Odense, Denmark, On Robot is a manufacturer of grippers for cobots. Having sold its customizable cobot grippers in more than 40 countries since its founding in 2014, On Robot decided to bring its “more user-friendly, safe and flexible” grippers to North American manufacturers.

Its flagship product, the two-finger RG2 gripper—available in single and dual versions — mounts on the arms of cobots without any external wires. The company explains that for robots that have infinite rotation of the last joint, this enables “unprecedented flexibility and productivity.”

On Robot has appointed high-tech distributor Gary Eliasson as its general manager for North America.

“The demand for easy-to-use and -program cobots in North America is growing dramatically,” said Eliasson. “But the missing link of the entire collaborative development has been grippers that are as flexible and dexterous as the arm itself. RG2 is that missing link. I’m looking forward to filling the demand with a robust distribution network throughout North America to help manufacturers automate their processes as easily and cost-effectively as possible.”

Meanwhile, the Budapest, Hungary-based OptoForce showcased its six-axis force/torque sensors to attendees of the show. Currently compatible with robots from Universal Robots and Kuka, the company is expected to announce compatibility with ABB and Yaskawa later this year.

According to Ákos Dömötör, CEO of OptoForce, the sensors automate a range of high-precision work — such as polishing, box insertion, and other finer assembly tasks — promising to increase efficiency, speed project development, and decrease production costs. Dömötör said the move toward cobots has been propelled by the need to have industrial robots that are sensitive, agile, precise and smart.

“With robots working more closely with humans, they need to accurately and precisely sense their surroundings and accomplish many tasks requiring the dexterity and sensitivity of the human hand,” he said, noting that this will help manufacturers who have “long offshored production due to high labour costs and the traditionally high cost of automation. The [show response] has been very good; it’s been very busy for us.”

This article was originally published in the May 2017 issue of Manufacturing AUTOMATION.