Features Robotics
Cobots lend a hand on the shop floor 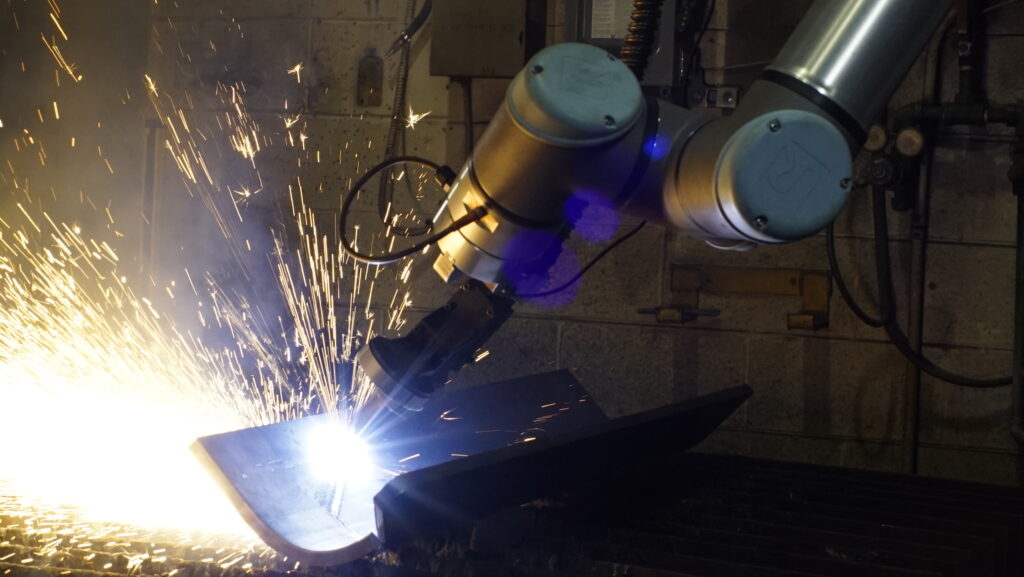 The cobot fit into the existing workflow, freeing up CIS team members for other value-added tasks. (Photo: Universal Robots)

Until very recently, Marc Sauvé never imagined he’d be teaching his team members to program robots. “I would never even have thought about a robot,” he says. “That was something for car manufacturers.”

Sauvé is process leader for steel processes at Carriere Industrial Supply (CIS), which manufactures heavy equipment and wear parts for mining and other applications in its plant near Sudbury, Ontario. His involvement with robotics exemplifies how the latest generation of robots could transform the day-to-day work in Canadian manufacturing facilities.

Like many Canadian manufacturers, CIS has been affected by the perennial shortage of skilled workers. Last November, a Canadian Manufacturers & Exporters (CME) survey reported that 77 percent of manufacturers rate attracting and retaining a quality workforce as their biggest challenge, and 42 percent claim they have lost business or paid penalties due to a lack of skilled employees in the past two years.

Large mass-producers such as automakers have responded by increasing their investment in automation, but that has been difficult for companies like CIS. While traditional robots are extremely fast and effective, their setup times and relative inflexibility make them unsuitable for much of the low-volume high-mix work that is the lifeblood of the typical Canadian manufacturer.

The robotics industry has met this challenge with the development of collaborative robots or cobots. While not as fast and powerful as their predecessors, cobots can operate safely in proximity to human workers, allowing them to share a low-volume high-mix workload with humans in a collaborative environment.

Cobots leverage the enormous technology investments that have occurred over the past decade. Current generation artificial intelligence (AI), for example, allows cobots to quickly learn new tasks, make decisions, and most important, identify conditions that could pose a safety risk for a worker only inches away. Advanced vision and control systems, combined with a plethora of task-specific hardware and software options, enable phenomenal versatility and dexterity. User-friendly interfaces make it practical for shop floor workers to program and be informed by cobots.

The result is a paradigm shift. Instead of exporting manual work processes to segregated robotic cells, companies like CIS are starting to bring robotics onto the shop floor to share the work with existing workers in a complementary fashion.

Contrary to what some believe, the push is not to replace employees with machines but to augment the existing workforce.

“Everybody’s having difficulty hiring or retaining employees,” says Joe Campbell, head of Americas marketing and application development for Universal Robots, Ann Arbor, Michigan, “especially skilled operators such as welders, and even people who do things like tend CNC machines. So, what we’re recommending to our customers is that they focus on the tasks that are least desirable for operators, that is, tasks that are, to quote the old cliché, dull, dirty and dangerous.”

Welding and machine tending are the fastest-growing areas for cobots, Campbell notes.

In a nutshell, cobots allow companies to optimize their workflow by dividing the work according to what’s suitable for humans and machines respectively. “Humans and robots each have their strengths and weaknesses,” says Dr. Alexander Wong, University of Waterloo engineering professor, Canada Research Chair in the area of artificial intelligence, and a founding member of the Waterloo Artificial Intelligence Institute. “There are some tasks that it’s not even safe for a person to do, and in some cases, humans can’t work to the required level of precision. In other situations, robots might not have the level of dexterity to deal with a particular task. Here, humans and robots are complementing each other.”

CIS began its cobot initiative when a team visited the Universal Robots (UR) booth at the 2019 Fabtech trade show in Chicago. CIS was no stranger to robotics. It has operated a robotic welding cell for over a decade, powered by a Fanuc long reach welding robot, for projects such as the welding of mining buckets, which require a very large number of welds.

The technology, however, is not suited for much of CIS’s workload. Setup times precluded many of the small runs that the company does, and it was impossible to get some of the larger workpieces into the cell.

The team was impressed with the ability of the UR robots to operate side-by-side with workers to reduce their risk. Another deciding factor was the user interface, which makes it practical for an operator or tradesperson to instruct the robot.

Follow-up conversations with UR, and with local integrator Advanced Motion & Control of Barrie, Ontario, concluded that plasma cutting was the most promising opportunity. Here, operators were spending an inordinate amount of time cleaning up after cuts. The company decided to purchase a UR 10e cobot for plasma cutting.

Mason Fraser, a junior programmer at CIS, was assigned the task of creating the software interface. Because of UR’s open approach, Fraser found himself on familiar ground.

“The back-end language that the API is written on is Java, which is something I’ve been writing in for close to ten years now,” he says. “There was definitely a learning curve around their scripting platform, but the documentation got me up on my feet pretty quickly.”

Fraser also notes that UR’s online learning tools made the tasks easier. Once the code was written, a simulation platform allowed him to do trial runs in a virtual environment before testing the cobot in real life.

Perhaps the biggest challenge was learning to understand plasma cutting. “I got quite a bit of help from Marc and some other shop people to teach me how plasma works,” says Fraser. “I’d never touched a plasma cutting application, so that was a bit intimidating. But now I feel a lot more familiar with it.”

Sauvé found the interaction useful as well. “You get a lot of engineers and technical people that come into the job and know the computer and the coding side of it, but they don’t see the physical part of it,” he says. “Showing Mason how this all works is better for me, better for him, and better for the company.”

With the system up and running, CIS operators “teach” the robot to make a plasma cut by guiding the robotic arm with the tool to indicate the starting and end points of the cut, and the correct angle to hold the tool.

“It’s surprising how easy it is for shop users to run this,” says Sauvé. “You tell it to trim a cut between point A and point B, and it will do that all day long. You can give it two points, or a thousand points – whatever the part requires.”

Sauvé notes that the cobot now fits naturally into the workflow. “It doesn’t change what we do – it just makes it easier,” says Sauvé. “Operators can use the robot to trim a workpiece and at the end of it, there’s little to no cleanup required. Doing it by hand, there would be some grinding and touch-ups.”

When it came time to assess the project, the numbers added up. The company estimates that the trimming work on mining truck bodies was reduced from 50 to 12 hours per truck, saving a total of 1000 hours. Furthermore, freedom from the drudgery of cleanup has allowed operators to experiment with different angles to improve the overall quality of the cuts. 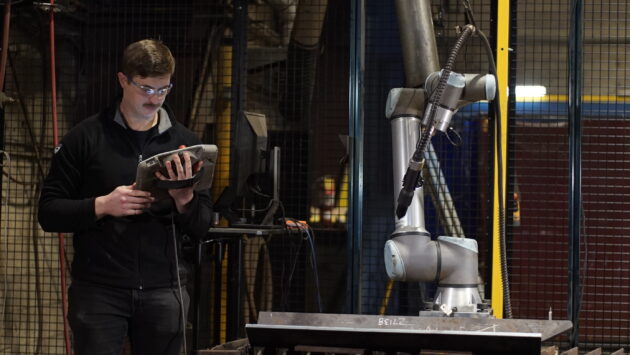 Adding a cobot to the workspace was an excellent learning opportunity for everyone at CIS. (Photo: Universal Robots)

Based on the success of the plasma cutting application, CIS decided to take on the MIG welding process that is frequently used. To accomplish this, the company purchased a UR10e cobot for MIG welding.

To provide the required versatility, the team built a welding skid that can be moved by forklift to the workpiece.

The potential targets for this automation are wide-ranging. Safety is a number one priority. For example, deploying a cobot is ideal for long welds that pose ergonomic challenges for operators.

An early success was using the welding cobot to assist an operator in attaching ribs to a mining truck body. In this scenario, the worker and the cobot work side-by-side, each attaching alternate ribs in a leapfrog fashion. This reduced the completion time by half.

Small tasks are another area. “A lot of small welds we do vary drastically,” says Fraser. “That’s where the low-volume high-mix comes in – in situations where you need to constantly reprogram it, the UR is a big bonus for us because we can teach it a new welding program quite easily.”

The company is also experimenting with more complex tasks. One is the process of layering, where, for example, a wear-resistant cladding might be welded onto a workpiece.

CIS’s work with cobots is just beginning. Fraser expects the company will use cobots to further optimize its welding operation, freeing workers to undertake value-added tasks such as improving the visual appearance of welds.

Looking to accelerate these goals, CIS sees great potential in applying cobot technologies more broadly in its manufacturing operations, now that it has joined Scotland-based Weir, an engineering firm that specializes in the development of highly engineered wear parts for mining and infrastructure markets.

“Alongside our skilled workforce, this is a great solution for us,” says Fraser. “I definitely think cobots are going to be the up-and-coming thing – we’re going to see a lot of them in the future and they’ll be hard to ignore.”

This article was first published in the September/October 2022 issue of Manufacturing AUTOMATION.